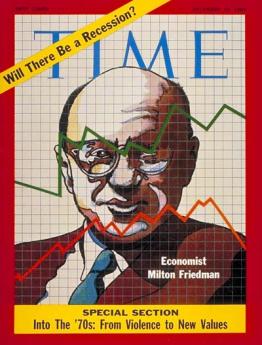 Since the death last week of Milton Friedman I've been thinking about the times that my life crossed paths with his. I've got a photograph on my bookshelf of me with him at the conference of the Drug Policy Foundation in 1991. In that year we gave him our most prestigious award, a lifetime achievement award named in honor of noted philanthropist and Chicago commodities trader, Richard Dennis.

When we gave Dr. Friedman the award it was controversial. Many in the reform movement are liberal Democrats who are offended by Friedman's view that "the government solution to a problem is usually as bad as the problem." But, no doubt all in the drug policy reform movement would agree with that statement when it is applied to the government's never-ending war on drugs. As Friedman correctly said: "Most of the harm that comes from drugs is because they are illegal."

Indeed, Friedman came to the conclusion about the futility of drug prohibition early. When President Nixon started the modern war on drugs he wrote a column in Newsweek criticizing the policy. He warned that it would not reduce addiction but instead would promote crime and corruption repeating the mistake of alcohol prohibition. He concluded: "So long as large sums of money are involved-and they are bound to be if drugs are illegal-it is literally hopeless to expect to end the traffic or even to reduce seriously its scope. In drugs, as in other areas, persuasion and example are likely to be far more effective than the use of force to shape others in our image." See "Prohibition and Drugs," at http://www.druglibrary.org/special/friedman/prohibition_and_drugs.htm.

In 1989 when drug czar Bill Bennet was escalating the drug war on behalf of President George H.W. Bush, Friedman wrote an open letter in the Wall Street Journal reminding him that the problems he was trying to combat were the made worse by prohibition. He warned that crack was a product of prohibition correctly pointing out "it was invented because the high cost of illegal drugs made it profitable to provide a cheaper version." He concluded the letter:

"Moreover, if even a small fraction of the money we now spend on trying to enforce drug prohibition were devoted to treatment and rehabilitation, in an atmosphere of compassion not punishment, the reduction in drug usage and in the harm done to the users could be dramatic.

"This plea comes from the bottom of my heart. Every friend of freedom, and I know you are one, must be as revolted as I am by the prospect of turning the United States into an armed camp, by the vision of jails filled with casual drug users and of an army of enforcers empowered to invade the liberty of citizens on slight evidence."

Friedman's view of the harms from drugs was not only the wasted money – now about $1 billion per week – but more so the destruction of inner cities, racially unfair incarceration, corruption of the police, wars in Colombia, Mexico and other countries that cost thousands of lives and the corruption of foreign economies as well as our own. The drug war has spurred the largest prison system in history with more than 2 million behind bars – one in four of the world's prisoners residing in the land of the free. As Friedman pointed out: "Had drugs been decriminalized, crack would never have been invented and there would today be fewer addicts... The ghettos would not be drug-and-crime-infested no-man's lands... Colombia, Bolivia and Peru would not be suffering from narco-terror, and we would not be distorting our foreign policy because of it."

When Friedman gave his key note address at the Drug Policy Foundation conference in 1991 he did not limit his talk to drug policy. He put forward a wider ranging analysis that covered a host of issues – schools, housing, medical care and the post office. Of course, this just added to the controversy around his nomination. But it was an opportunity to hear a perspective that no doubt held important truths on the limits and fallibility of government – truths that could lead to more sensible approaches whether you completely agreed with Friedman or not. (You can read a transcript of his speech and the questions and answers at http://www.druglibrary.org/special/friedman/socialist.htm.)

Friedman also appeared on a television show we produced, America's Drug Forum, and I crossed paths with him at two conferences at the Hoover Institution at Stanford University, and with Arnold Trebach edited a book on the writings of him and psychiatrist Thomas Szasz. He always put forward a clear vision and persistent attitude. Indeed, his persistence is something all advocates can learn from – he went from being ignored and shunned to winning the nobel prize for economics and being an adviser to presidents. His life should give all of us hope that change is possible, indeed it is inevitable, and if we persist change will move in our direction.

Kevin Zeese is president of Common Sense for Drug Policy.

For more on Milton Friedman you can purchase "On Liberty and Drugs" edited by Arnold Trebach and Kevin Zeese at http://www.amazon.com/Friedman-Szasz-Liberty-Drugs-Prohibition/dp/1879189054.

Many of his writings are included in The Schaeffer Library of Drug Policy at http://www.druglibrary.org/schaffer/Misc/friedm1.htm.

The Police State's War on Weed and Backyard Gardens

Attack of the Tomato Killers: The Police State's War on Weed and Backyard Gardens

The Torture and Execution of Kiki Camarena