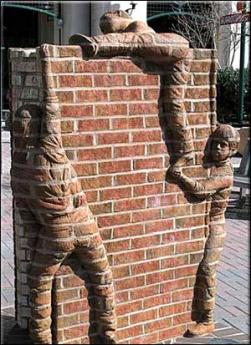 Missing the point about illegals and college tuition
By Craig J. Cantoni
Jan. 4, 2007

A controversy is raging in Arizona over a proposition passed in November that keeps illegal immigrants from getting a tuition break at state universities, thus forcing them to pay out-of-state tuition, which is three times higher than in-state tuition. Although a majority of Hispanics voted in favor of the proposition, immigration activists will be marching outside of the Glendale, Ariz. stadium where the college BCS National Championship Game will be played on Jan. 8.

A local talk-radio station, KFYI, has been running a fascinating interview with an Arizona State University college student who has been living in this country illegally since her parents brought her here when she was three years old. The most fascinating part of the interview was not her lame excuses for not seeking citizenship, or her lack of critical-thinking skills, or her major in Chicano studies, or her lack of appreciation for taxpayers spending $120,000 on her K-12 education. The most fascinating part of the interview was that she thinks just like most native-born students about state-subsidized college education.

She believes that as a matter of justice and fairness, she is entitled to below-cost tuition because she and her parents have been paying taxes.

Ah, the power of socialized education to stop people from thinking about the injustice and unfairness of socialism. Even the talk-radio host missed the point, although he is a bright guy who professes to believe in freedom and free markets.

The point is that subsidized college tuition comes at the expense of other people, especially at the expense of people who don’t attend college. For example, the Mexican national’s Chicano studies are being subsidized by Mexican-Americans who cut lawns, wash dishes, work in construction, or pay private tuition to attend a technical school. Where is the fairness and justice in that? What gives her the moral right to mooch off of them so that she can obtain a degree and earn more money than them? (Assuming someone can earn more money by majoring in Chicano studies)

The correct answer to these philosophical and moral questions is not that she and her parents have paid taxes. That’s the correct answer only if the amount of their taxes that funds state universities is at least equal to the cost of her education. No doubt, that is not the case. And it is even less likely that it was the case for her K-12 education, which, again, cost taxpayers about $120,000.

The correct answer is that she doesn’t have a moral right to mooch off of other people, unless each of the “moochees” has agreed to subsidize her education. To believe otherwise is to believe the Marxist philosophy that the collective has more of a right to an individual’s labor than the individual has.

The standard counter-argument goes like this: It benefits all of us to subsidize the college education of some of us. Well, if that’s true, why stop at college education? Why not subsidize the wages of a young man who works in construction and is learning a trade on the job? Why not buy a bull and several cows for a rancher who wants to raise cattle for a living? Why not rent a building for a young woman who wants to start a day-care business? After all, these occupations benefit all of us.

Incidentally, I’d like to know how it benefits me or the rest of society for someone to major in Chicano studies.

On a related note, much of the curricula at state universities is devoted to remedying the sorry education received by graduates of government K-12 schools. And even with the remedial courses, nearly half of entering college freshmen will never graduate from college.

A closing note: Arizona’s K-12 government schools rank near the bottom in test scores, primarily due to the state having a disproportionate share of legal and illegal immigrants from south of the border, almost half of whom have children out of wedlock, which is surefire way of increasing poverty, lowering academic achievement, and fueling the high Hispanic dropout rate.

I wonder if such facts are taught in the ASU Chicano studies program. Clearly, the injustice and unfairness of socialized college education are not taught.
___________

An author and columnist, Mr. Cantoni can be reached at ccan2@aol.com.

Mom Sues After Toddler FORCED Into Pride March In School

School System Failing And Is No Longer There To Educate, Says Teacher

Parents line up to slam woke Michigan school board member for saying 'whiteness is evil' ...

How 'woke' schools, unions 'turned education system on its head'

How Extreme Has The Dumbing Down Of America Become? You Might Want To Brace Yourself For This One

How Extreme Has The Dumbing Down Of America Become?