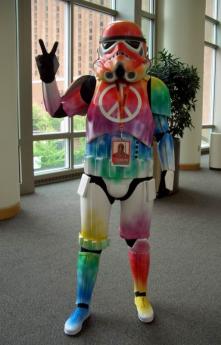 COMES NOW THE UNITED STATES OF AMERICA: "To recognize such a claim in this case would open a Pandora’s Box and extend to all soldiers a possible defense never anticipated by the Code."

In the Military Courts –Martial of Sgt. Kevin Benderman, having filed a

Conscientious Objector application after ten years of honorable service in the

Army including a combat tour in Iraq:

“COMES NOW THE UNITED STATES OF AMERICA, by and through its counsel, and files

this Motion in Limine.

The Government moves this Court to grant the following relief:

fact, to Wit: the accused’s status as a conscientious objector; the dictates of

his conscience, religion, or personal philosophy; his patterns of belief

concerning Operation Enduring/Iraqi Freedom and war generally; and his world

views, and to exclude any documentary or testimonial evidence of any sort

during the case on the merits concerning the accused’s personal beliefs.

Furthermore to also Preclude the Defense from raising irrelevant issues

concerning his alleged reasons for seeking conscientious objector status, to

Wit; experiences during the accused’s prior deployment to Iraq including

children; that he was not allowed to render medical attention or food to Iraqi

civilians; that he was ordered to perform hazardous duty he was untrained to

do, and any other allegation of misconduct by his fellow soldiers.

because no natural physical force put pressure on the accused. His feelings of

conscientious objection, aversion to war, and the motives for going to war –

necessity. To recognize such a claim in this case would open a Pandora’s Box

and extend to all soldiers a possible defense never anticipated by the Code.”

What is wrong with a country where a soldier’s “dictates of conscience,

religion or personal philosophy,” personal experiences in combat, and faulty

In December 2004, having experienced every destructive aspect of war firsthand,

including the misrepresentations necessary to encourage a nation of conscience

to support the war, my husband, Sgt. Kevin Benderman, attempted to file a

Conscientious Objector application with his unit command. He was a ten-year

evaluations from all levels of command.

He had been to Iraq. He witnessed the immoral acts of war, the unethical

orders of superior officers, and the lack of support for the real needs of the

soldiers he served with. He had enlisted to fulfill what he saw to be his

responsibility, to give to his country in defense of its laws and the

principles of its constitution – the foundation for the freedoms all Americans

enjoy. His time at war gave him the firsthand experiences he needed to realize

levels of command, and he would not compromise his principles to serve a cause

he knew to be immoral, unethical and without merit.

As the law and Army regulations allow, and in keeping with his sworn duty to

laws, he attempted to file a conscientious objector application requesting to

be released from further military service. His command violated not only Army

regulations, but the law of our land by refusing to accept his written request,

throwing it back at him and ordering him out of the office.

After public pressure, and a strong letter of support by our Congressional

representative, he was released from a meeting with the Command Sergeant Major

and ordered to complete all relevant paperwork necessary to file his CO claim.

Without missing a day of duty, his command assigned him to the Rear Detachment

unit of his battalion, his CO process was initiated, and he was given

responsibilities commensurate with his rank.

He was never given an order to deploy, even as his forward commander gave a

assigned to the Rear Detachment by that same command. An Army major, Battalion

chaplain met with Kevin and found him to be completely sincere in his beliefs,

and his request for Conscientious Objector status:

them. SGT Benderman’s willingness to file for this status is an expression of

arms and take life. Everything else is subordinate to this ethical belief.”

Movement – violations of regulations he did not commit. One asks – was it

incompetence, disorganization or a strong desire on the part of the command to

should? Only justice will show the truth. Justice takes time. It is time for

trumped up charge for a crime he did not commit, the government, “by and

application. Even as we spent time in several cities across America discussing

Conscientious Objection, its meaning to us, and the reasons my husband would no

longer participate in war, his reasons never pinpointed the immoral invasion of

Iraq as a justification. He knew, based on his firsthand experiences of war,

conversations he had with veterans of past wars, lessons of his father and his

own introspective process, that he would no longer allow himself to participate

in anything as destructive, immoral and inhumane as war. Sgt. Kevin Benderman

stood on principle, and just as he enlisted in the military believing in the

need to defend the foundation of our country, when he knew war no longer

defined his values he requested legal release from the military, once again in

defense of our constitution and the laws of humanity on which it was based.

Participation in war, and witnessing its destructive effects on all involved,

resolutions to the world’s differences in ideologies, cultures and traditions.

The government “by and through its counsel,” by filing a Motion in Limine to

court of law, opened the door to new considerations which extended beyond the

simple statement that all war is wrong.

Why would the government be afraid of a man’s conscience?

and recounting of his personal experiences in a public record?

If we were not meant to question the actions of this war, then wouldn’t justice

in a court of law prove that to the government’s benefit?

What was it they wanted to hide?

In its “Motion in Limine” the government lists as FACT, that “After

redeployment (from his tour in Iraq), the accused re-enlisted in the Army and

transferred to the 3rd Infantry Division at Fort Stewart.” In FACT, my husband

re-enlisted several months prior to the invasion of Iraq, before his unit had

foreign policy; railed against the war in Iraq and perceived illegalities

committed by the federal government.” Interestingly, every public discussion

positive dialogue in an effort to resolve our differences without the

inhumanity that war brings, and he refused to discuss the policies of this

defense of their manipulated allegations against him?

Also included as Fact by the government counsel, “The accused has made numerous

statements to the press…including on his website, stating the reasons for his

actions. These include accusations that when he was in Iraq he was ordered to

shoot children and forbidden from rendering medical assistance to Iraq

If the government knew my husband’s “accusations” to be unjustified, why did

they work so hard to silence him?

In December 2004, Sgt. Kevin Benderman made a private petition to his command

to be released from military service according to the regulations. He did not

seek public attention, he did not want anything more than to be given his right

to choose how to live his life, as the laws he served to defend allowed.

Even before his case became public, the Army commanders were working feverishly

to silence my husband’s conscience.

In the end, truth cannot be silenced.

Isn’t it time we knew the truth?

Monica is the wife of Sgt. Kevin Benderman, a ten year Army veteran who served

a combat tour in Iraq, and returned to file a Conscientious Objector request

based on his firsthand experiences. To learn more, please visit

Monica and Kevin may be reached at mdawnb@coastalnow.net

Navy declares ALL sailors who resist taking COVID-19 vaccine will be discharged no...