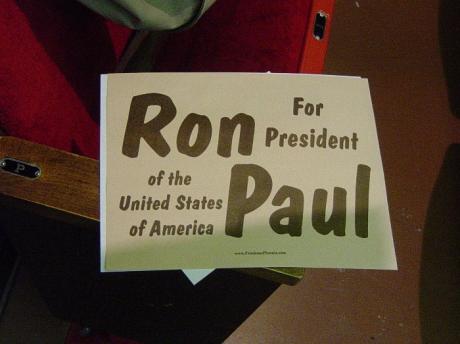 Ron Paul: A Lifeline for Republicans - by Ernest Hancock

Before becoming well known as a libertarian activist I was a registered Republican that was supportive of the free-market rhetoric of Ronald Reagan. As a High School graduate in 1979 I remember all too well the skyrocketing gas prices and how much more it cost to fill up my 1965 Chevelle Super Sport. At the same time me and my male friends were being told that we had to file our names with the recreated selective service so that we could be located for the coming draft for the inevitable war with Iran.

By 1984 the rock band “Queen” summed up many things with their hit ‘Hammer to Fall’:

“Yeah, toe your line and play their game
Yeah, let the anaesthetic cover it all
Till one day they call your name
You know it's time for the hammer to fall – yeah

What the hell we fighting for ?
Ah, just surrender and it won't hurt at all
You just got time to say your prayers
Eh, while you're waiting for the hammer to hammer to fall”

Every weekday on the radio here in Phoenix I would come back from at least one of the breaks with the second and third verse quoted above. “We grew up tall and proud in the shadow of the mushroom cloud...”. I knew exactly what my kids were going through following 9/11,… the same was done to my generation (and the one before that, and the one before that). By the beginning of the second Reagan term I remember a moment of feeling that it would have been a relief if the 3rd world war would just start so I wouldn’t have to hear about it all of the time. This emotion was captured in the final third of the Lord of the Rings trilogy when one of the hobbits complained about the feeling just before the battle was worse than the start of the fighting. At the relatively young age of 45 I have already recognized the enormous effort to keep as much of the population as possible filled with that exact feeling of inevitable conflict where the actual conflict produces an emotion preferable to the emotion created by the anticipation of it.

My generation grew up with the Viet Nam war on the TV at dinner time with the family. Even as a young kid around 10 years old I knew I was watching the same video footage over and over and over and over. The scenery, locations, rhetoric and even many of the same people are all over the media trying to have the same effect on my children’s generation as they did on mine. Siagon, Tehran and likely Baghdad all have the same thing in common, the people that live there don’t want the American government telling them how to live. The free-market and voluntary exchange has done far more to influence and change Viet Nam and even China than the largest military in the known universe. And isn’t that what we were claiming we wanted for them in the first place?

Since the election of ‘Dubya Dubya Dubya dot Warmonger dot com’, the entire pretense has been removed for anyone paying attention. While the “Military Industrial Complex” could take advantage of an exploding world market for peaceful use of their technology and manufacturing capacity, there are dysfunctional people with power that have no intention of lifting the fully equipped jack-boot of oppression from anything found under its heel.

Individuals empowered with economic freedom and individual liberties by the institution of a government created to make sure individuals are left alone to pursue their own happiness is what our founders considered ‘a blessing’. What we have now is far from that ideal. What is worse, is the supporting ideology to impose order and control as defined by supporters of a fascist ideology that is guaranteed to produce millions (if not billions) of deaths.

Through the mind fog created by this madness is the hope Ron Paul provides us with his willingness to represent the best of what American heritage has to offer. To present and clearly explain the phrase, “The American Dream”.

Ron Paul’s chances of becoming America’s next President of the United States will not be a consideration for millions that will support his effort. He’ll do his part and others will do theirs and the end result will be the end result. I find myself a non-voter for several reasons, but that doesn’t cause the least bit hesitation in my willingness to help Ron Paul spread the message of liberty to a liberty starved populace at a time it is most sorely needed.

Bush announced he is sending even more troops into Iraq with the Democrats making sure that they use their potential opposition to help grow 'The State' even more than the Republicans have over the last 6 years. So the news that Ron Paul will oppose the established collectivist is just the starting gun voters and non-voters have been waiting for to demonstrate their dissatisfaction with what is happening and, unlike the Perot days, an opportunity to make it clear what they _do_ want. The delicious taste of “sweet philosophical revenge” will have many wanting a sample to share will others, I have no doubt.

In fact I am so certain of opposition to the building of such a movement, I wanted to demonstrate it as quickly as possible.

FreedomsPhoenix’ Senior Editor, Powell Gammill, made sure we all knew yesterday that Ron Paul had just made his intention to seek the Republican nomination for President of the United States clear. Immediately the news spread. Once again Arizona becomes the center of the universe since his most likely opponent will be Arizona Senator John McCain. While the McCain machine is developed and the media are tuned and ready to support him, it will be the people of Arizona that will be his greatest opposition. We know him best, and I couldn’t be more delighted to have such a perfect example to represent “The State” in opposition to a well known supporter of liberty, Republican Congressman from Texas, Ron Paul.

I immediately knew what should be done. Yesterday afternoon I asked my printer to print 1000 fliers with the simple text that made it clear that Ron Paul was running for President of the United States of America. What party, what year, issues and other details would come later. This morning at 5:30am, 6 of us (Republican, Libertarian and Democrat, non-voters) gathered and assembled various materials to be distributed. The Ron Paul announcement took top billing. In two weeks is the Republican state party convention and today is the Maricopa county convention that could draw over 1000 attendees easy. Today in an off election year 450 was expected. So with our Republican escort we did what Republicans have been pestering us repeatedly to do,… work with Republicans to help them fix their party.

In the 2006 election cycle it was not uncommon for several of us to speak to large Republican crowds of influential activists that were very supportive of our positions and often to the most applause of any speakers. Former Libertarian Presidential nominee candidate and immediate past candidate for Arizona Governor, Barry Hess, is a common addition to Republican functions as a speaker and invited guest. Both Barry and I are easily recognized by most Republican activists and were warmly greeted by legislators and party officers as we distributed hundreds of Ron Paul fliers, one for every seat in the auditorium.

The fact that Barry Hess has announced his intention of seeking the Libertarian nomination for President of the United States of America didn’t create a moments hesitation in his willingness to promote liberty by making sure the Republican activists knew Ron Paul, a Republican, was widely supported. For most libertarians, Arizona Libertarians in particular, partisanship (even voting) is of little importance when compared to the fight for individual liberty.

Those of us that helped the Republicans supportive of Ron Paul, and were not Republican, left before the event started. But later we would learn that a “straw poll” was taken to determine how many supported which announced Republican candidates for President,… Ron Paul was not on the list. Typical :)

In two weeks the state convention will be a predictable event that will have a heavy John McCain push that will take the form of paid consultants and high gloss material. I would even expect a multi-media presentation. But Arizona is full of Republicans that are delighted with Ron Paul in the race and already I have received copies of many emails from very prominent Republicans that I believe to be sincere in their desire to help Ron Paul as much as possible.

My role? I won’t have anything to do with any centrally planned collective effort that involves more than my individual whims and efforts totally directed my conscience and guaranteed by the 1st Amendment of the United States Constitution.

What those of us here in Arizona know all too well is that John McCain and those riding that horse, can not allow Arizona, one of the very first Presidential Primaries, to show weakness in his support. We will be up front, legal and open about our support of liberty, but I suspect that a lot of our coverage will be about the reaction to our itty bitty low budget efforts. Opposition to what Ron Paul represents here, around the country and in Washington, D.C., do not play nice and the only rule is 'win at any cost'.

You didn’t think freedom fighting was easy did ‘ya? 

Full List of Republicans Who Have Always Voted Against Ukraine Aid

"I deny that I was bribed!"

Tucker Carlson To Speak At Iowa Summit, Raising Eyebrows And Speculation of a Presidential Run