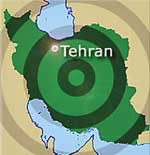 While the president’s announcement that an additional 20,000 troops would be sent to Iraq dominated the headlines last week, the real story was the president’s sharp rhetoric towards Iran and Syria. And recent moves by the administration only serve to confirm the likelihood of a wider conflict in the Middle East.

The president stated last week that, “Succeeding in Iraq also requires defending its territorial integrity- and stabilizing the region in the face of the extremist challenge. This begins with addressing Iran and Syria.” He also announced the deployment of an additional aircraft carrier battle group to the Persian Gulf, and the deployment of Patriot air missile defense systems to countries in the Middle East. Meanwhile, US troops stormed the Iranian consulate in Iraq and detained several Iranian diplomats. Taken together, the message was clear: the administration intends to move the US closer to a dangerous and ill-advised conflict with Iran.

As I said last week on the House floor, speculation in Washington focuses on when, not if, either Israel or the U.S. will bomb Iran-- possibly with nuclear weapons. The accusation sounds very familiar: namely, that Iran possesses weapons of mass destruction. Iran has never been found in violation of the Nuclear Non-Proliferation Treaty, and our own Central Intelligence Agency says Iran is more than ten years away from producing any kind of nuclear weapon. Yet we are told we must act immediately while we still can!

This all sounds very familiar, but many of my colleagues don’t seem to have learned much from the invasion of Iraq. House Democrats strongly criticized the Iraq troop surge after the president’s announcement, but then praised the president’s confrontational words condemning Iran. Many of those opposing a troop surge are not calling for a withdrawal of our troops from the Middle East, but rather for “redeployment.” Redeployment to where? Iran?

We need to return to reality when it comes to our Middle East policy. We need to reject the increasingly shrill rhetoric coming from the same voices who urged the president to invade Iraq.

The truth is that Iran, like Iraq, is a third-world nation without a significant military. Nothing in history hints that she is likely to invade a neighboring country, let alone America or Israel. I am concerned, however, that a contrived Gulf of Tonkin- type incident may occur to gain popular support for an attack on Iran.

The best approach to Iran, and Syria for that matter, is to heed the advice of the Iraq Study Group Report, which states:

In coming weeks I plan to introduce legislation that urges the administration to heed the advice of the Iraq Study Group. Dialogue and discussion should replace inflammatory rhetoric and confrontation in our Middle East policy, if we truly seek to defeat violent extremism and terrorism.

Dead in the Water JCPOA Talks

Biden Admin's Nuclear Deal: "This Isn't Obama's Iran Deal. It's Much, Much Wors