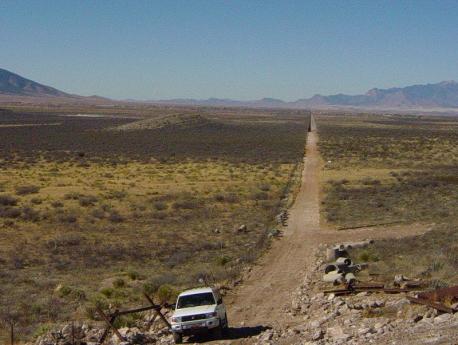 In the distance is Naco, Sonora/Arizona and the end of the Naco wall

(It's now 12 1/2 years later and I'm ready for another trip to the border for PART 2. I want to see the new Kartchner Caverns opened up in Southern Arizona on this trip. It'll likely be Winter 2019 before I get a chance to go. So, start thinking about it and I'll make a big deal out of the trip when the time is available to me)

Sunday, January 14th 2007, I started the day early on the Mexican border near the Naco border crossing in Arizona. I went at the invitation of good friends that are very concerned about the immigration issue and how America's future is threatened. I spent the time asking questions between camera shots and video taping. I would also be given a full operational tour of the American Border Patrol

"American Border Patrol is an organization founded to bring the crisis called Illegal Immigration to the forefront of the American public's consciousness. By using high tech, innovative equipment, ABP members detect, locate and report illegal immigration as it occurs. ABP has a mandate to make information about illegal immigration available to the public. We do this through the use of the internet and other media. ABP has a strict hands off policy, unlike other border action groups who are interested in this issue, we adhere to a strict observe and report policy. Our goal is to show the American people that the problem can be resolved, and we know how to do it!"

The café where we started our day was also conducting a training session for a group of "Minutemen". I've been fully aware of the Minutemen from their beginning and have gotten to know well one of the men best known to represent them. Chris Simcox has made himself available to me for interviews and in personal presentations at the Arizona Breakfast Club and I was very interested in making sure I got to see their fence work I'd heard so much about.

My good friend is a Marine (they are never "former Marines") from here in the Phoenix area where he owns a construction company. He and his friends are all interested in the border issue and are very supportive of efforts to bring what is really happening to the attention of the American people. They are also motivated to help in anyway that they can. A small group of about a dozen people had a simple mission that demonstrated their support of Border Security and their willingness to help the border agents.

Past experience made it clear that there was a problem dispatching border agents to areas where citizens were observing illegal entries because there was no markers along the wall separating Naco, Mexico with Naco, Arizona. The solution was simple. Large yellow and black reflective signs placed about 100 yards apart that started at a marker numbered "11" the next was "20", "30", "40" etc. along the steel fence/wall. This would allow for accurate information about where the breach was taking place. The signs were of high quality,made of metal and cost over $60 a piece.

The fence in that area is made of the steel plating used for landing pads and runways during Viet Nam and was military "junk" recycled to create the fence in that area and ran for at least 2 -3 miles. This 12 foot steel fence had the signs screwed on with 8 self tapping screws after the adhesive "liquid nails" was applied to the back of each sign. The size of the signs were determined after the volunteers had talked to border agents and they said that they needed to be read with their optics at 2 miles. Simple. No asking permission or years of study, just volunteers wanting to help. After the first sign is placed some Border Agents came by to say hello. Seemed like a good idea to them. By the time the second sign is placed the word from above came down that they were vandalizing government property and would be arrested if they didn't stop and must remove the signs that they did place. They left, but refused to remove the two signs.

After the placement of the first sign a good libertarian friend of mine that knew the others as well and shared the drive down to the border with me, drove with me along the border fence/wall to where it ended less than a mile away. There at the end of the fence we could easily step across the border. Another half mile or so we came to a ridge that crossed the border and the 3 strand barbed wire fence stopped. At the top of the ridge was a monument marking the border and referencing a US/Mexico treaty on a plague. Looking down on the other side of the ridge we could see the Minutemen fence being constructed. I'm certain that it will deter crossings into the private ranch it protects but is nothing more than a symbol in any other respect (which was its main objective I assume).

A call to us on my friend's cell phone relayed the story of the group of volunteers placing the signs being threatened with arrest. We stopped once on the way back for some more video and then we all headed to the properties of the American Border Patrol. Glenn Spencer is the key figure to the operation and was open to any question. I was surprised by his candor in making it clear that their operation was demonstrating exactly how the border can be protected with the use of technology and manpower while exposing the US Government's ineffectiveness. The border agents are treated with kindness and can be expected to be respectful and even appreciative of the volunteers. But they keep their jobs by taking orders from supervisors through their politically appointed directors. Mr. Spencer and his supporters have done their job well. Like the Minutemen, ABP has helped bring attention to an issue that is filled with more politics than truth.

I took the time to watch two DVDs given me by Glenn, "The Truth about the Border ?" And the Secure Fence Act of 2006" & "US Border Patrol ?" How it Works, Why it Doesn't". Both are recent productions and are very good reference material and does an excellent job of getting the uninformed up to speed on the issue as it has meandered through the Congress and the public mind.

What was very good to witness was the calm understanding that the volunteers had that they were being lied to. I didn't get any indication that there was any anger directed at the illegal immigrants. Their frustration and activism is clearly focused on their own government and the media in general. It was welcome news to hear that they have come to understand that it is the Internet that will make the truth available to anyone interested in what they have to show. The live infrared video feed on the Internet from the ABP cameras at night that shows the regular traffic of the smuggling of people and cargo is hard to refute. Just the night before they tipped of the border patrol that they could tell that bails of what appeared to be drugs were being carried by three men and later 150 pounds of Marijuana was seized.

It was no secret to anyone that I am a libertarian and have a differing opinion of where the real problems lay. My views of the welfare/warfare state and their influence on this issue will be shared in part 2 of this story.

To understand the motivations of those in political power you only have to answer the questions about how is their power and influence best expanded. I can't recommend highly enough the reading of The Arizona Project. This book detailed the reasons behind the murder of an investigative reporter for the Arizona Republic in the late 70's. The newspaper industry sent dozens of reporters to do what no government agency would,… find the truth before every investigative reporter had their own personal bomb placed under their car driver's seat. The smuggling of people and drugs go way back in Arizona history and the money involved and who is making it will answer every one of your questions to some degree. For more political corruption here in Arizona and a very good unofficial sequel to The Arizona Project, "What's In It For Me? by Dary Matera is an additional light on the continuation of Arizona's political motivations on such issues.

I'm happy to share my own personal opinions on the issue of Closed vs. Open Borders and the War on some Drugs. But I don't want to distract from the facts in this report. So I'll share my opinion in Part 2.

I was also given a guided tour of the very same Naco POE area you mention in your article and drove eastwards on the dirt road separating the U.S. from Mexico in 2007, by David Standard a 27 year USBP retired agent who lives nearby. From what I read in your article, nothing much has changed over the past 30 months, the range fencing, cut in various places, the well worn paths heading into the low hills of Arizona to the north. Until the U.S. government becomes serious about the open borders, the status quo will continue unabated. There has always been a lingering nagging question in my mind as to the real reason the borders remain open. Notwithstanding the inexpensive labor, there is a massive unknown amount of money being generated by the drug trade. It is not  unreasonable nor improbable to think that some of this money is being channeled to the politicians who for years staunchly defend open borders and a general amnesty. Considering with each amnesty that has passed the U.S. Congress since 1986 has utterly failed to stop or prevent more illegal's from entering the country, therefore there has to be another reason this problem continues to this day.   Norman ****
Lowell, Mass.