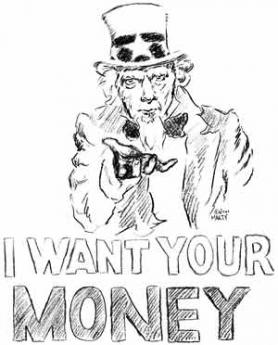 Many Americans sense that something is rotten in the United States and that the nation has reached its peak and is on the verge of decline. Are they correct?

Yes, but not for the reasons that they think. Decline will not come about because of foreign competition, the trade deficit, illegal immigration, terrorism, CEO pay, energy costs, an overextended military, military misadventures, or any of the other popular hobgoblins.

Like successful businesses that decline, the nation’s decline will be caused by its success. Paradoxically, at their peak, businesses and nations throw away the very attributes that made them successful and got them to the top. A form of collective suicide, it is akin to mountain climbers throwing away their oxygen bottles, ropes and ice crampons when they reach the top of Mt. Everest.

We are quickly discarding our oxygen bottles, ropes and ice crampons. Equally disturbing, we don’t have leaders who are smart, strategic and courageous enough to warn us of the danger. To the contrary, as we shall see in this article, the leaders of both political parties are encouraging us to discard the things that got us to the top.

What are the things that got us to the top? They are self-reliance, frugality, entrepreneurialism, risk-taking, individualism, personal responsibility, family responsibility, federalism, limited government, and free markets. These are being thrown away and supplanted with dependency, entitlements, debt, bureaucracy, collectivism, nannyism, statism, and mercantilism.

Let’s take a closer look at the startling changes in our culture, starting with our national mindset.

When the nation was young, Americans didn’t snivel about income inequality, didn’t sue if they spilled hot coffee on themselves, didn’t vote to take their neighbor’s money, didn’t whine about foreign trade, and didn’t expect the government to wipe their noses and raise their children.

Early Americans focused on creating wealth, not redistributing it. Instead of feeling entitled to free stuff, they felt thankful to be free. Paradoxically, they were dirt-poor compared to modern Americans, but, unlike modern Americans, they didn’t think that anyone owed them a living.

Today, over 60 percent of the federal budget is redistributed in the form of entitlements, subsidies and handouts. That’s twelve times as much redistribution as the five percent in 1900. But that is not enough free stuff. Americans want more...and more... and more... and more. Like someone addicted to heroin, their addiction to other people’s money is insatiable.

To meet the demand, large organizations have sprung up to obtain more free stuff for them, including the biggest of them all, AARP. After all, why should paunchy, well-off seniors give up their I-Hop breakfasts, trips to the casino and gas-guzzling Buicks to buy medicine when they can send their bills to future generations? And why should families support their elderly members when they can socialize the cost?

How prevalent is this entitlement mindset? Well, judging by the thousands of emails I’ve received over the years from readers of my columns, articles and essays, I say that 90 percent of Americans believe that the primary role of the government is to give them stuff. The ideals of self-sufficiency, personal responsibility and frugality are as quaint as the powdered wigs worn by men during colonial times.

The basic building-block of society, the two-parent family, is becoming just as quaint. The crumbling of the building block is the greatest threat to our economic well-being, but, due to political correctness, it is the most underreported public policy issue in the mainstream media.

A voting bloc is growing that will soon rival AARP. It is the bloc of single parents who have married the state and want free stuff from their new spouse, including free kindergarten, free pre-K, free pre-pre-K, free tutors, free lunches, free breakfasts, and other free government services without paying any income taxes in return.

Equally troubling is the nation’s mindset about global competition. The nation that was not afraid in the eighteenth and nineteenth centuries to compete with the greatest empire in the world, the British Empire, is now afraid to compete with China and India. Competition might mean sacrificing a little in the short term to gain in the long term. It might mean saving money instead of buying a big-screen TV and chrome wheels for the SUV. And it might mean telling kids to give up football for calculus, to give up TV watching for studying, and to give up summer vacations for year-round schooling. What a horrible thought. How unfair life would be.

As we shall see below, the nation no longer has national leaders with the courage and conviction to stop us from throwing away our oxygen bottles, ropes and ice crampons.

Imagine being in a foxhole with Harry Reid, Nancy Pelosi and Dennis Hastert, and hearing them say, “Follow me!” Now imagine being on the Pennsylvania side of the Delaware River on Dec. 25, 1776 and hearing George Washington give the command to get in the boats to attack Trenton. I’d run the other way in the first scenario and climb into a boat in the second.

Was there ever anyone in high office more uninspiring than former House Speaker Dennis Hastert? And is there a group of people more programmed, poll-driven and phony than the current herd of presidential candidates?

The nation has gone from Patrick Henry to Patrick Leahy, from Thomas Jefferson to Tom DeLay, and from John Adams to John Edwards. The former led with courage and conviction; the latter with committee hearings, polling data, populist drivel, and hair spray.

Similarly, to take a business example, there was a stark difference between Henry Ford and the men in the gray flannel suits who ran the Ford Motor Company at its peak. One of the suits, Robert McNamara, left Ford Motor to become Secretary of Defense, where he applied his bean counting to the Vietnam War. As an organization man, McNamara was ill-equipped to beat an inspirational leader like Ho Chi Minh. Today’s question is whether organization men (and women) can beat terrorist leaders.

Of course, there are exceptions to the general rule. For example, many people found Ronald Reagan to be an inspirational leader. But even he couldn’t change the mindset of the people and streamline the federal bureaucracy. Bureaucracy? Why am I mentioning something as innocuous as bureaucracy? Because, as we shall see below, it is far from innocuous.

As I wrote in my first book, the older and more successful an organization, the less real work is done in the organization. (Real work is work that is directly connected to producing and improving the output, profitability and competitiveness of the organization.) Over time, paper pushers, regulatory specialists, second-guessers and other parasites crowd out real work and eventually outnumber producers.

The same with a nation: the older and more successful a nation, the less real work is done in the nation.

Parasites are quickly replacing producers in the U.S. The fastest-growing jobs are public-sector jobs and private-sector jobs that exist because of the regulatory state, such as tax accountants, tax lawyers, lobbyists, and other regulatory experts. Public-sector jobs alone now outnumber manufacturing jobs by two to one.

Because money and opportunity can be found in parasitical jobs, that’s where the nation’s best and brightest have been seeking careers. Why study math and science if more money can be made as a regulatory expert?

Of course, the parasites are motivated to increase the number of their hosts, not reduce them. That’s why a law like ERISA was a half-inch thick when enacted but is now a foot thick. That’s also why the tax code was a handful of pages in the immediate years following the ratification of the Sixteenth Amendment but is now 40,000 pages. The same natural phenomenon has occurred with thousands of other laws.

Take the fairly new Sarbanes-Oxley law. Ostensibly enacted to stop Enron-like fraud, the law has morphed into time-consuming and expensive silliness. For example, an executive in a large national company told me that the company’s auditing firm has interpreted the law to mean that performance appraisals for lower-level employees have to meet certain standards. As a result, managers throughout the organization are going through a meaningless paper exercise instead of doing real work and beating overseas competitors. Unfortunately, the company can’t export its audited performance appraisals to China.

Is the nation on the verge of decline? Yes, but not for the reasons that most people think. To see the real reasons, Americans should examine their own mindsets, look at the leaders they elect, and question what they do for a living. In other words, instead of blaming China, India, corporate greed, oil companies, and other hobgoblins, they should look in the mirror.

An author, columnist, activist and strategic planning consultant, Mr. Cantoni can be reached at ccan2@aol.com.

What is a libertarian?