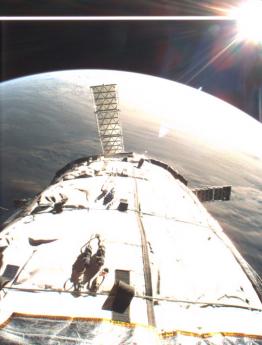 Unfortunately, we have recently received notification from our launch provider, ISC Kosmotras, that the launch of Genesis II will be delayed by at least 60 days. I know, we are disappointed too.

During a launch that occurred directly after the successful deployment of Genesis I, Kosmotras experienced its first failure in late July of last year. Since that time, Kosmotras engineers, as well as their Ukrainian partners at SDO Yuzhnoye, have conducted a thorough analysis of the Dnepr launch vehicle. The Kosmotras/Yuzhnoye team have successfully identified, evaluated and resolved the problem that caused the failure. Kosmotras has assured Bigelow Aerospace that the Dnepr will soon be prepared to safely and successfully return to flight.

Naturally, we are all disappointed because the spacecraft was and is ready to ship out to meet the original Jan. 30 launch date. Currently, our spacecraft is awaiting shipment to Russia with all your photos and personal items, etc. onboard. We now expect to ship the spacecraft for flight sometime in the early part of March for a launch on or about April 1. [Yes, I know April Fool's day, but these space stations are no hoax. - Powell]

Meanwhile, in Las Vegas, Genesis II stands ready for its mission and we are putting this additional time to good use by testing and retesting its systems. If Kosmotras can deliver on its current schedule, we expect to ship Genesis II to Russia as we said above at some point in early March for a launch on or about April 1st.

If this situation changes or we receive new or different information from Kosmotras, we will post additional announcements here on the Bigelow Aerospace Website.

We’re looking forward to doubling our footprint in space with the launch of Genesis II later this year, and, with all of you, taking another step forward in this bold adventure.

Blue Origin will launch William Shatner into space today! Here's how to watch it live.

Blue Origin Was Doomed from the Start

William Shatner will fly to space aboard Blue Origin rocket