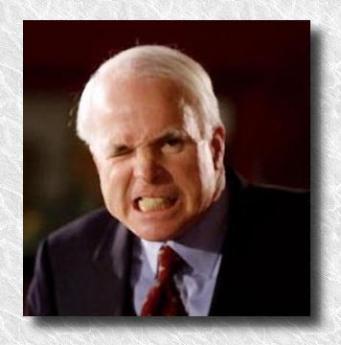 McCain will be forced to ‘Embrace The Suck’ in Arizona.

I’ve learned a new phrase being used in Iraq by the troops there. With no other rationale left to them for being in Iraq and to have a chance at maintaining any of their sanity, the troops council each other to “Embrace The Suck”.

The Suck: - (US) The field, bad conditions, rotten duty, used to describe the military as a whole. One might say "embrace the suck" to tell someone to stop complaining and accept the situation.

Those with any experienced insight into Arizona politics can safely claim that Arizona Senator John McCain is going to have a lot more in common with the US troops in Iraq than his present record might indicate. There are insurgents in McCain’s home state, and in his own political party, that are waiting for the “Troop Surge” following a political occupation that has gone very wrong for them.

What most Americans don’t know is that September 11th 2001 saved John McCain from a recall effort that was very popular among Republican here www.recallmccain.org…. I just took a look and the site is still there with all of the reasons he was targeted by the rank and file Republicans of Arizona. The links to media coverage of the effort are still listed as is the statement about ‘rallying around our leaders after the attacks of 9/11’ that brought the popular recall to a stop. And I don’t exaggerate when I use the word ‘popular’. An office was opened, hundreds would demonstrate at any opportunity to show their feelings about John McCain. The Internet was used for the first time for such a large effort here in Arizona so that petition forms could be downloaded and immediately signed and/or circulated.

Those of us on the sidelines providing encouragement ranging from the “Golf Clapping” for a nice shot at the Phoenix Open to more active support were amazed at the spontaneous efforts of Republicans that did not want their political party to represent what was being cheer leaded by the John McCain machine.

Whenever I think down the road to Arizona’s early Presidential Preference Primary in February of 2008, I know two things,… that the computer voting will never be manually validated in a McCain win, and that leading up to the ‘Taxpayer funded non-binding straw poll’, McCain will have to “Embrace The Suck” of campaigning in Arizona with a quality candidate like Texas Congressman (R) Ron Paul in the race. In fact it has already started.

Symington loses vote in precinct hostile to McCain Arizona Republic - November 30th 2006: "It was a small-time election, but it exposed a widening rift inside the Arizona Republican Party that has bitterly divided moderates and social conservatives and threatens to embarrass U.S. Sen. John McCain in his expected run for president.

In his first-ever political defeat, former Gov. Fife Symington lost his bid Tuesday to become Republican chairman of McCain's home legislative district in north-central Phoenix. Symington was not considered conservative enough to defeat District 11 incumbent Rob Haney, a retired IBM manager who took over the organization two years ago and has been outspoken in his criticism of McCain.”

This story describes how far U.S. Senator’s John McCain and Jon Kyl have ventured from the rank and file of the Arizona Republican party and that they need their out of state millions to have political success here at home.

"He (McCain) came at us with every big gun he had to take us out of his district," Haney said. "Their plan was to get rid of us because we would object to his presidency.""

Grassroots Arizona PAC 40% funded by Democrat Donors. Sonoran Alliance December 5th 2006: - "Greg Wendt and Lisa Wendt of San Francisco, CA (generous benefactors of the Democrat Party and its candidates) gave over 40% of the funds for Grassroots Arizona; a PAC set up to target the Republican chairman of legislative district 11. The details are chronicled below.

On August 10, 2006 a Candidate Support or Opposition Committee called Grassroots Arizona PAC was registered with the Arizona Secretary of States office (Search for “Grassroots Arizona”). Anne Lynch is listed as the chairman and Jane Lynch as the treasurer.

The first two donations were made by Jane Lynch and Paul Hickman. Since Jane is the treasurer her name is not a big surprise. It is our understanding that Paul Hickman is Chief of Staff for U.S. Senator John McCain. That is interesting.

The purpose of the PAC seems to have been to get PC’s elected in LD 11 that would support someone besides Rob Haney as chairman. The PAC also mailed out a letter to LD 11 PC’s in support of Fife Symington for chairman. The letter was signed by Jon Kyl, John Shadegg, Jeff Flake, Rick Renzi, and several other Republicans from Arizona.

I Googled Symington+Haney+11 for the information above (it’s all about knowing what questions to ask :)

Pullen edged by James in a vote held in Phoenix by GOP party delegates and leaders. He will succeed outgoing GOP Chair Matt Salmon, a former East Valley congressman and lobbyist with the Greenberg Traurig law firm. Business leaders and political party leaders tended to support James, a top executive along with her husband, Gordon, at Gordon C. James Public Relations. She managed the Bush/Cheney 2004 re-election campaign in Arizona.

This article was written to demonstrate that if you go high enough, the same people control all politics (or trying to really hard). It is only through the efforts of individuals that the bad guys are exposed and defeated. The immediate fate of the Republican Party of Arizona was decided by 3 voters of 812 at their convention this immediate past Saturday. And make no mistake, this was a full court press from the top floors of the tower and they do not forgive and they do not forget. How many individuals or group of individuals were responsible for at least 3 votes?

Glance over the links provided and look at the names involved in the effort to assure John McCain’s success in Arizona and then examine the results of two very important elections to further that goal. Money, contacts, pedigree, power, fame, promises, position, control and many other attributes still could not prevent the ass whupp’n by hundreds of people that are simply better informed than the bad guys had anticipated.

I keep making the point over and over how Arizona is the ‘Center of the Universe’ for the 2008 Presidential Election (and many other political efforts) and this is where a lot of fun is to be had. While FreedomsPhoenix will enjoy making sure that there are “No More Secrets & No More Lies” for those interested, it will be the Republican activists that will either save their own party or not. The elimination of scoundrels and hypocrites from their ranks serves us all and I wish them well. But I have no illusion that the attainment of power by a better sort of people would serve us as well as the elimination of the power of coercion over your neighbor. When you dance with the Devil, you don’t change him.