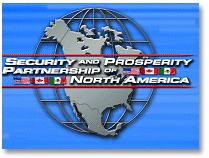 (Washington, DC) Judicial Watch, the public interest group that investigates and prosecutes government corruption, today released documents obtained under the provisions of the Freedom of Information Act from the U.S. Department of Agriculture (USDA) concerning the Foreign Agricultural Service’s involvement with the Security and Prosperity Partnership of North America (SPP).

The deliverables and timetables for the SPP trilateral task force include specific processes, reports and the establishment of laboratory working groups, dating from June 2005 through March 2007.

“These documents show the complexity and intricate nature of the Security and Prosperity Partnership,” said Judicial Watch President Tom Fitton. “Judicial Watch seeks transparency and openness in the Partnership so that Americans can come to informed conclusions about the activities of their government and its bureaucracies.”

Previously, Judicial Watch released documents obtained under FOIA from the International Trade Administration of the U.S. Department of Commerce concerning the “Security and Prosperity Partnership of North America.” The Commerce Department also provided substantial documentation concerning the North American Competitiveness Council, which consists of 30 members, 10 each from the United States, Mexico and Canada.

On March 23, 2005, heads of government Vincente Fox, George W. Bush, and Paul Martin launched the North American partnership at a meeting in Waco, Texas, with the expressed goal of “a safer, more prosperous North America.” Critics, however, maintain the partnership may ultimately undermine U.S. sovereignty by establishing a “North American Union,” with open borders and a common currency.