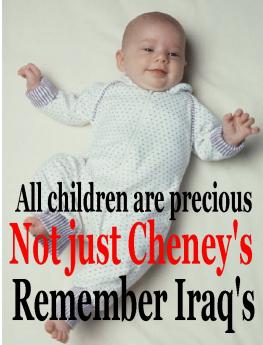 Babies are a good thing; they are the hope of the world, the perpetuation of the human adventure; the soul healing delight that transforms girls into mothers.

And while we cannot fault Dick and Lynn Cheney for their expressed delighted that their daughter is about to give birth to a child their own movement would characterize as an abomination the recent exchange between Wolf Blitzer and Dick Cheney does point to the contradictory practices and standards of those we know as NeoCons. Their actions send a message about their real agenda; that is what has been operating under the cover of rhetoric since Dick Cheney was a high school cheerleader, courting his far more political girl friend, Lyn.

Why should Blitzer have allowed Dick Cheney to determine what questions Cheney, a public employee, should have to answer? Cheney and Bush are not our employers, nor does their behavior give them a right to deference.

The assertion that Cheney or Bush or any of those who we know as NeoCons should be accorded respect continues a mistake Americans have been making for a long time. It is time to change that. According respect to individuals who occupy positions of power through deceit empowers deceitful behavior. Instead of respect they should be shunned. The mistake of according such deference itself is a continuation of the mistake we made in extending the trappings of 'aristocracy' to such as Bush.

Bush is no Aristocrat; he is the offspring of generations that made their living from sucking the tit of government.

America is a nation established to refute the idea of elitism; the Revolution was in large part capitalized by people who rejected the idea of a 'natural aristocracy' or one established through the acquisition of wealth when that wealth was not viewed through a lens that judged how it was accumulated. We are not British. America's mission statement affirms the absolute ideal of equality.

Americans do not bow or curtsy to kings. Each of us is in our own right sovereign, holding that standing not by government but as enunciated by Thomas Jefferson in America's Mission Statement, "We hold these truths to be self-evident, that all men are created equal, that they are endowed by their Creator with certain unalienable Rights, that among these are Life, Liberty and the pursuit of Happiness. — That to secure these rights, Governments are instituted among Men, deriving their just powers from the consent of the governed, —"

Americans should accord respect only to those whose actions affirm accomplishment by means that extend the cultural capital of cooperation through doing the right thing. No Robber Baron deserves our respect; no PR agents for Robber Barons do either.

The slow, steady displacement of respect accorded to those who accomplished financial well being and social justice through going right, replaced with just how high the dollar signs are piled, has taken its toll of American culture. Today, behavior that would make barnyard animals blush is excused in celebrities of all kinds. Today, wealthy Mafiosi are accorded respect; money in large amounts is all that matters. Bill Gates is courted to donate to charities although most of us know that his wealth came from the worst kind of predatory behavior, carried out by skirting the law and ignoring simple decency.

The same pattern played out in the aftermath of those earlier generations of Robber Barons. Taking money and favors from the Federal government, these opportunists risked not their own wealth but the wealth entrusted to government by the people. The tendency to see wealth entrusted to government as up for grabs has been going on for a long time. The Big Four, and their Eastern cronies, including Rockefeller, were despised by people whose own values reflected a belief that wealth earned by deceit, corruption, and violence carried with it no social credit. When met with social ostracism they bought their way in. That was not their mistake, it was the mistake of those who let it happen. That the names of Stanford, Doheney, Mulholland, Carnegie, and others carry a patina of aristocracy is a mistake that has proven to be more expensive than we could have imagined.

Today both Left and Right in America cozy up to those holding ill-gotten gains, in obvious hopes that the ooze of stolen money will rub off on them. It is a sad sight and continues the deterioration of real American values.

Cheney's wealth is the accumulation of money 'earned' through carrying out the agenda of large corporations, whose income stream depends of limiting the market choices of Americans, keeping them on the grid of dependency. The correct way to treat him is to turn your back and ignore his presence. Treating him with deference is itself despicable and offensive. Cheney is an employee of the American people. He deserves no more respect than an auto mechanic who does phony repairs on your car. In justice, the auto mechanic is less toxic and does not usually expect us to bow or curtsy.

This Cheney grandchild is being born within a lesbian relationship and outside of marriage. Personally, I would not judge mother or child. It is Mary Cheney's life and choice. But Lynn Cheney raised her children in a home environment where she wrote about lesbian sexual behavior while emoting the rhetoric of living a very different life. This positioning profited Cheney and his fellow NeoCons to the tune of billions, if not trillions of unearned dollars. Those dollars were not created, they were stolen from real people, many of who will die as a result.

Mary Cheney's baby will live a life of comfort and privilege while Iraqi children die horribly, their deaths an adjunct to the lies told by this baby's grandfather.

, 29 Jan 2007 (IRIN) - The Iraqi government, the United Nations and NGOs have condemned an attack against a girls' school in Baghdad that left five students dead and more than 20 injured on Sunday. Parents, students and teachers were left horror-struck after the incident.

An eleven year old boy in Baghdad would doubtless have something to say to Dick Cheney about his life.

"BAGHDAD, 29 Jan 2007 (IRIN) - "I'm 11 years old and an only son. I'm a pupil at Mansour Primary School in Baghdad. Lately, I have been feeling very lonely in my class. This week, I was the only student in class because all my classmates didn't come to school for various reasons.

"Since last September, three of my classmates have been kidnapped and two have been killed. One was murdered with his family at home and the other was a victim of a bomb explosion a month ago."

This is one of the things Cheney and Bush have bought with the money stolen from Americans.

The Cheney baby is not the issue; long life and health to the unborn child, no matter what its gender and despite the deceitful and disgraceful behavior of its grandparents.

The only mistake Blitzer made was to accord Dick Cheney a respect he does not deserve. Americans need to examine how wealth is accumulated; that is what matters. It is past time for Americans to reassess and take action.