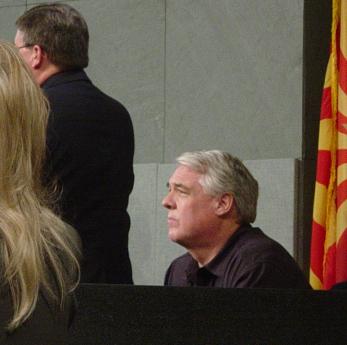 Mesa City Councilman Tom Rawles & the ‘Sit in’ for Peace

A simple enough idea. Tom Rawles is often featured in the mainstream media. Tom Rawles’ media attention of late has been due to his refusal to stand for the Pledge of Allegiance at the beginning of Mesa City Council meetings as a protest of an illegal war in Iraq. TV 10 Fox News here in Arizona aired Tom Rawles' comments to the veterans there at the meeting. “If I don’t have the right to sit for the pledge, then standing for the pledge means absolutely nothing”

Even with this promotion from the Arizona Republic there were a total of about 100 to 120 people (depending on if you count all of the city employees and the police). I knew a dozen of the people there to show support for Tom Rawles and there were at least 6 others there to show their support. About 30 people were from the press. At least 6 camera crews with their reporters and various print media. Many people were there for other issues I imagine but I suppose that there were 35 – 50 people there to show support for… I don’t think it was very clear. You knew something was up when several 10 – 12 year olds in Boy Scout uniforms were there with their scoutmaster. Small flags were common in the hands of many with a few good men wearing shirts demonstrating their past service in the Marines.

FreedomsPhoenix announced about 4-5 hours before the event that Powell Gammill (Senior Editor) and Ernest Hancock (Publisher) would be there. Even though Powell had told me that he intended on being there almost 2 weeks ago we reasoned that it would be best not to turn this into a contest or set up any sort of confrontation by having hundreds of anti-war protestors there to shout down veterans. We decided to do a little activism and report what happened. There could have been a great deal of effort generated on both sides to get as many bodies as possible there without a real focus on what was happening and why. As it turned out it was very peaceful and respectful and a very excellent example of how City Government should handle such potentially volatile conditions. Of course there was the now too common metal detectors manned by two police officers with several city employees with ties and badges wandering around.

Powell had taken the time to create a 2 sided flier that addressed two issues he thought important to share with the people there after the pledge was done and people had their say. PDF of Flier After a local pastor started off the evening with a prayer, we were all asked to remain standing while one of the Boy Scouts went to the podium to lead the Pledge of Allegiance. No one yelled, no one made any rude comments and no one interrupted. But Tom Rawles sat down after the prayer as did many others through the small auditorium. While the majority of the room was standing it was clear that there were more there in support of Tom Rawles than was anticipated. The meeting started off with a woman on the council asking the city staff if it was appropriate to make a comment about the Pledge issue. Given the OK she started to talk about a small child that... It was time for me to leave. I had no intention of staying anyway and whenever “the children” are brought into the debate by a politician I know the real issues are being sidestepped more often than not.

We took Powell’s fliers and distributed small stacks to supporters that I’ve known for many years to be respectful of people and asked that they help me to distribute them when the event was over and I’d make sure that I caught anyone leaving that didn’t get one.

I was followed outside by two print reporters. “Aren’t you the Libertarian Party guy?” I feel a story that is already written coming on. “I consider myself a libertarian. I am Ernest Hancock, the Publisher of FreedomsPhoenix.com”. All the while I would hand a flier to people as they left. The first reporter was a young guy new to the area and was just hoping to get a quick quote. The other reporter was more confrontational. I made it clear that I was there to support Mr. Rawles’ effort to bring attention to an illegal war. This prompted the older reporter to ask me how it is that I get to decide what is and is not illegal. “Congress has the sole authority to Declare War and that responsibility can not be transferred and the…..” I was then cut off by the reporter with his making the statement that I wasn’t making any sense etc. (I hate obtuse, already wrote the story, going to misquote you, butthead reporters – but then this was one of the driving forces behind the creation of FreedomsPhoenix :)

The other reporter didn’t have the depth of knowledge to cover the issue and was looking for a sound bite so he asked if I normally stood for the Pledge of Allegiance. “No, I haven’t stood for the pledge for at least a few years”. He then asked if I stopped after the War in Iraq started. “As a matter of fact it was just about that time. But it wasn’t just that particular issue that caused me to question the pledging of allegiance to an oppressive government (‘or any government’ I thought to myself – no sense in totally frying his brain)”… ‘STOP THE PRESSES! I got a real story here about the whole concept of pledging at all.’ …Not!

The other older reporter represented everything I despise about the press and I’m certain he doesn’t intend on reporting anything I said. The whole time I kept asking that he read the short flier where Powell had addressed both the war and the issue of the pledge. I did get to tell both reporters that I thought it was very important that the people passionate about the pledge understand where it came from and why so that they are certain they are supporting what they think they are.

Earlier in the afternoon I did get a call from a reporter from the Arizona Republic that covers the Mesa City Council. It was clear that he had more knowledge about the issues involved and got to the heart of the matter and asked if I could give him a few moments at the meeting. A few worthy questions and in 45 seconds we were done. He’ll do ‘whatever’ but at least both of us were cordial to each other. I did my best to stay away from the media and just make sure everyone got a flier. Barry Hess is a well known Libertarian in Arizona that does very well in front of a camera so he took a few interviews. Gary Nelson reporter for the Arizona Republic story - Click Here

After the meeting was over, less than an hour I think, and the people had all been offered a flier by at least one of the volunteers, I went inside to say ‘hello’ to Tom and wish him well. He was still talking to people in front of several TV cameras. I got there just in time for him to spend a few minutes with a girl about 12 years old that was holding a dozen 12 inch high flags that she and her father had brought. I didn’t catch her comments but Tom was doing very well explaining the importance of thinking for yourself and how his goal was to generate some thought and discussion about the war and government abuses etc. Her father seemed very pleased with the exchange and shook Tom’s hand. A few of us libertarians from the old days that knew Tom back when waited until he was done with people and the press to congratulate him on his efforts. I mentioned the one reporter that I thought was looking to write a negative story but Tom admonished me for not focusing on all of the positive education that was going on and how many people had come to understand what he was doing and why. He’s right of course. I only saw the TV 10 cut but it was very flattering. Tom is a very smart guy and has no hesitation making it clear that he is a libertarian in his philosophy. But I know that one of the most libertarian things an individual can do is to be independent. The press more often than not can’t help but associate a person with a group or collective. Many in the media don’t understand how someone can get so much attention for sitting down,… Maybe it’s because everyone else was on their knees.

Here are some past stories leading up to tonight.

The two sides of Tom Rawles

Rawles' attackers just don't get it

Critics of Rawles go too far