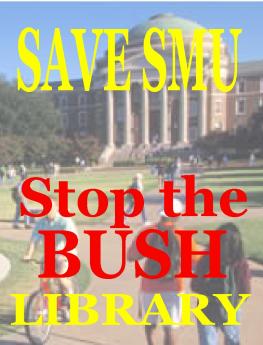 If the debate on whether or not the Bush Library and Policy Center will be housed at Southern Methodist University in Dallas were a sports event the outcome would already have been decided. Last night the number of signatures on the petition opposing the Library stood at 10,101; this morning it is 10,124, most of whom identify their denomination as Methodist and include their church. The on line petition supporting the inclusion of the Library and Policy Center on the SMU campus stood last night at 107. This morning it is 106, the last two entries had been removed and one more added.

Last night the last two entries were from Dr. Susanne Johnson, the faculty member from the Perkins School of Theology on Campus who cosigned the letter that resulted in the demand from the faculty that the project be subject to a referendum by the same faculty. The two letters were written on the issues that have appeared elsewhere in the media of late. They included,among others, the unwillingness of Bush to meet with the Bishops of the Methodist Church for the last six years and the use of torture, a practice that violates the tenets and values of Methodism, according to those same Bishops.

The use of vilifying rhetoric is mostly absent on the Protect SMU petition; vitriol is a standard practice on the other. Since it is well known to political activists that NeoCons routinely employ a cadre of mostly young men to surf the web and plant disinformation the similarity in wording and grammatical errors is understandable. They are fed their scripts through the network of political operatives that includes John Fund, Matt Drudge, and David Horowitz.

The Protect SMU Petition focuses on the same issues; the violation of the tenets of Methodism by the Bush Presidency. The other ignores the issues raised, points to the potential for profit, and chooses to characterize those in opposition as, 'effete snobs," "a few looney lefti-wing creeps ," and "left wing, radical socialists." Phrases are slavishly reused.

No one on the Pro Bush Project Petition addressed the concerns of those opposing the Bush Project or commented on Bush's continued unwillingness to meet with the Bishops of his own church or expressed an opinion on the use of torture by Americans.

The issues raised on the petition supporting the Bush Project go to the potential of the facility to generate income for the area and its utility as a research facility. In the majority of cases the signers ignore the issues, instead demanding unquestioning loyalty either to US policy or to Bush, either personally or as president. Far fewer identity themselves by a church affiliation.

The benefit of the Bush Project for Dallas as a tourist destination is doubtful. Crawford Texas opened shops featuring novelties and collectibles in the belief tourism would bring in bucks but their income from these has fallen off significantly as the Bush Presidency used up the good will it stole from the tragedy of September 11th. According to the Office of the Controller of Texas. There is an upward swing in sales when Cindy Sheehan or other protesters are there, though it is not clear that it is pro-Bush memorabilia that is driving that blip on the local economy.

Since Bush has signed an executive order allowing him and his heirs to block access to documents in virtual perpetuity the usefulness of the Project for research is probably nil. Already funded to the tune of a half a billion dollars, mostly by the Bush core constituency of oil companies and other multinationals who are profiting mightily in Iraq, the Policy Center is expected to justify and promote the policies that Bush has himself followed. Would that mean that techniques in torture would become a subject for research as a useful and approved 'policy tool?' One can imagine the kind of research carried out in the back behind the sound proofed doors. But we are lead to that conclusion and to contemplating the idea that how to lie more effectively and manufacture the needed justifications would also be included. Perhaps that is to be Karl Rove's job as he retires to a prosperous old age?

Presumably, SMU will be offered an endowed Chair dedicated to the work of Leo Strauss.
The problem is, perhaps, trying to view the Bush Library and Policy Center through the lens of what we have always understood as acceptable. By refusing to be governed by SMU and by massive funding, this facility will be different than any presidential library ever built. Bush is planning to take the power of the presidency with him when he leaves office.

When something is so monumentally outrageous we try to find a way to look at it that makes it comprehensible. It is like America has been invaded by blood sucking aliens dressed with the smiling faces of ordinary humanity but it is not polite to mention it.

While most of those signing the Protect SMU Petition are still Methodists as of now, both Doctors Susanne Johnson and Andrew Weaver, the Methodist Minister from Brooklyn, a graduate of SMU, are well aware that the petition may well become a national referendum on the Bush Presidency. When asked, each admitted that possibility. Dr. Johnson said that the possibility that the dialog would extend beyond the boundaries of the University and of Methodism had recently occurred to her as she saw the media interest increase. She said she and Dr. Maclvaney, the other faculty member who signed the original letter, have been interviewed by a steady stream of media from various parts of the country and overseas.

Dr. Weaver commented that while it had not been his intention to elicit a broader dialog he hoped that the petition and the questions it raised could focus Americans on a consideration of morals, values, and a renewal of faith. Faith, and courage are values much needed by Americans today.

A group on the SMU Campus is also collecting signatures in support of the Bush Project. That group, SMU Young Conservatives of Texas, has been active on the Dallas campus of the University since 2002. Members participated in the Affirmative Action Cookie Sale in 2003, where members sold cookies with different prices listed for men and women and for Black, White and Native American individuals, the order of cost being $1.00 per cookie for white men, $.75 for white women, $.50 for Hispanics of both genders, and $.25 for Blacks of both genders. The event was closed down by the administration as disruptive of peace after the sale of $1.50 worth of cookies. Evidently, none of those offended thought of having a friendly Hispanic buy the supply of cookies at that lowest price and setting up a table to resell these for more money. Developing a sense of humor as we act locally would be a good idea.

There was no report on who had baked the cookies, but I would bet it was a white woman who then had to pay to eat them. Since I am a member of the National Federation of Republican Women I know how it all works.

The NeoCons have done an artful job of positioning themselves and creating icons that attracted young people into the Republican Party who came with far different motivations than was once the case. The idealists who read and believed the words of Barry Goldwater are few now. Goldwater wrote in his book, Conscience of a Conservative,

"Throughout history, government has proved to be the chief instrument for thwarting man's liberty. Government represents power in the hands of some men to control and regulate the lives of other men. And power, as Lord Acton said, corrupts men. "Absolute power," he added, "corrupts absolutely."

Those same activists, once committed to seeing the Republican Party deliver on the promises of small government, local control, individual rights for all, and simple kindness were displaced by a new breed; young men and women who idolize Anne Coulter because she has glamorized political deception and become wealthy so doing. The young people who flock to see such as Coulter seek icons that say, "wealth and power are the only justifications you need."

Today, America is confronted with a State far more dangerous to us and confiscatory on every level than any imagined by our founders. Today, we see a State that is the property, not of Americans, but of the same corporations who will build the Bush Library.

Southern Methodist University is about to be consumed because it is convenient for Bush to claim membership as a Methodist and he will be able to have a lavish home near his buddies. To that end he is more than willing to sacrifice all the unearned money he can lay hands on. In this we are witnessing the plans he and his buddies have for America. We will not be able to say we were not warned.

Get off the Grids, Organize Locally, Build Coalition.