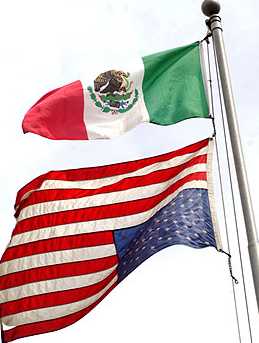 Los Angeles protest, March 2006
If The Government Will Not Act, We The People Have A Duty, And The Legal Power To End It

Some months ago over 500,000 illegal immigrants took to the streets of Los Angeles in bold defiance of the immigration laws of the United States. Similar demonstrations were also held that day and in the days following in other American cities.

For instance, Jose Angel Gutierrez, a Professor at the University of Texas in Arlington has said publicly, "This is our homeland. We belong here. We cannot, we will not, and we must not be made illegal in our homeland. We are not immigrants…We are free to travel the length and breath of the Americas because we belong here. We are millions. We just have to survive. We have an aging white America. They are not making babies. They are dying. It is a matter of time. The explosion is in our population."

Learn how the People, by themselves, can stop the invasion by invoking their Rights under the Constitution: No Borders?, NO Taxes.

Click Here to access this article from the We The People Foundation and to read the Petition For Redress of Grievances regarding the President's failure to enforce the immigration laws of the nation.

The immigration issue is not merely a political question -- it is a gross violation of the Constitution that the People can stop by lawfully forcing the Government to obey the Constitution.

As Haiti's crisis worsens, a rising number flee by sea

Illegal Immigrants Would Get Up To $10.5 Billion From Reconciliation Bill

'I Will Send Them To Delaware': DeSantis Proposes Sending Undocumented Migrants To Biden Hom

Internal Report: More Than Half Of Border Patrol Agents May Be Fired For Being Unvaccinated

Democrats Have Made America a Wonderful Haven for Immigrant-Invaders

The Democrats Are Already Buying the Immigrant-invaders' Votes

Biden obviously doesn't care about border security or human trafficking, since the...