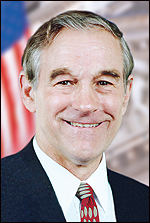 Two weeks ago I discussed how Congress and the administration use our fiat money system to literally create some of the funds needed to prosecute our ongoing wars in Iraq and Afghanistan. We’ve already spent more than $500 billion in Iraq, mostly through supplemental spending bills that are not part of the normal appropriations and budget process. But with costs soaring and no end to the war in sight, yet another supplemental spending bill must be passed soon—and both parties in Congress are only too willing to provide the money under the guise of supporting the troops.

Never mind that the American people showed their dissatisfaction with the war in the fall elections. Congress lacks the political will to stand up to the administration and assert its power over the purse strings, and too many vested interests in the defense sector benefit from the supplemental bills. A cynic might even suggest that many Democrats want the war to drag on, despite their supposed opposition, to damage the president politically and benefit them in 2008. But whatever the reason, the money for war keeps flowing.

Defense Department officials will ask Congress for the next supplemental bill in coming weeks. The amount requested is likely to be at least $140 billion. If we stay in Iraq beyond 2007--and the administration has made it clear that we will-- the bill to American taxpayers easily could top one trillion dollars in another year or two.

I doubt very seriously that most Americans think the war in Iraq is worth one trillion dollars. Even those who do must face the reality that the federal government simply doesn’t have the money. Congress continues to spend more than the Treasury raises in taxes year after year, by borrowing money abroad or simply printing it. Paying for war with credit is reckless and stupid, but paying for war by depreciating our currency is criminal.

Even the most modest suggestions for controlling spending in Iraq have been rejected. Some in Congress argued that reconstruction money should be paid back when Iraq’s huge oil reserves resume operation. Another idea was to find dollar-for-dollar offsets in the rest of the federal budget for every dollar spent in Iraq. But the administration adamantly opposed both ideas. Budget cuts are unpopular, and the profits from Iraqi oil will never compensate American taxpayers.

The mentality in Washington is simple: avoid hard choices at all costs; spend money at will; ignore deficits; inflate the money supply as needed; and trust that the whole mess somehow will be taken care of by unprecedented economic growth in the future.

We have embarked on the most expensive nation-building experiment in history. We seek nothing less than to rebuild Iraq’s judicial system, financial system, legal system, transportation system, and political system from the top down-- all with hundreds of billion of US tax dollars. We will pay to provide job training for Iraqis; we will pay to secure Iraq’s borders; we will pay for housing, health care, social services, utilities, roads, schools, jails, and food in Iraq. In doing so, we will saddle future generations of Americans with billions in government debt. The question of whether Iraq is worth this much to us is one Congress should answer now-- by refusing another nickel for supplemental spending bills.