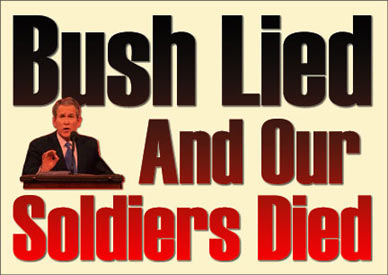 This grand debate is welcomed but it could be that this is nothing more than a distraction from the dangerous military confrontation approaching with Iran and supported by many in leadership on both sides of the aisle.

The biggest red herring in this debate is the constant innuendo that those who don't support expanding the war are somehow opposing the troops. It's nothing more than a canard to claim that those of us who struggled to prevent the bloodshed and now want it stopped are somehow less patriotic and less concerned about the welfare of our military personnel.

Osama bin Laden has expressed sadistic pleasure with our invasion of Iraq and was surprised that we served his interests above and beyond his dreams on how we responded after the 9/11 attacks. His pleasure comes from our policy of folly getting ourselves bogged down in the middle of a religious civil war, 7,000 miles from home that is financially bleeding us to death. Total costs now are reasonably estimated to exceed $2 trillion. His recruitment of Islamic extremists has been greatly enhanced by our occupation of Iraq.

Unfortunately, we continue to concentrate on the obvious mismanagement of a war promoted by false information and ignore debating the real issue which is: Why are we determined to follow a foreign policy of empire building and preemption which is unbecoming of a constitutional republic?

Those on the right should recall that the traditional conservative position of non-intervention was their position for most of the 20th Century – and they benefited politically from the wars carelessly entered into by the political left. Seven years ago the right benefited politically by condemning the illegal intervention in Kosovo and Somalia. At the time conservatives were outraged over the failed policy of nation building.

It's important to recall that the left, in 2003, offered little opposition to the preemptive war in Iraq, and many are now not willing to stop it by defunding it or work to prevent an attack on Iran.

The catch-all phrase, "War on Terrorism," in all honesty, has no more meaning than if one wants to wage a war against criminal gangsterism. It's deliberately vague and nondefinable to justify and permit perpetual war anywhere, and under any circumstances. Don't forget: the Iraqis and Saddam Hussein had absolutely nothing to do with any terrorist attack against us including that on 9/11.

Special interests and the demented philosophy of conquest have driven most wars throughout history. Rarely has the cause of liberty, as it was in our own revolution, been the driving force. In recent decades our policies have been driven by neoconservative empire radicalism, profiteering in the military industrial complex, misplaced do-good internationalism, mercantilistic notions regarding the need to control natural resources, and blind loyalty to various governments in the Middle East.

For all the misinformation given the American people to justify our invasion, such as our need for national security, enforcing UN resolutions, removing a dictator, establishing a democracy, protecting our oil, the argument has been reduced to this: If we leave now Iraq will be left in a mess – implying the implausible that if we stay it won't be a mess.

Resorting to a medical analogy, a wrong diagnosis was made at the beginning of the war and the wrong treatment was prescribed. Refusing to reassess our mistakes and insist on just more and more of a failed remedy is destined to kill the patient-in this case the casualties will be our liberties and prosperity here at home and peace abroad.

There's no logical reason to reject the restraints placed in the Constitution regarding our engaging in foreign conflicts unrelated to our national security. The advice of the founders and our early presidents was sound then and it's sound today.

We shouldn't wait until our financial system is completely ruined and we are forced to change our ways. We should do it as quickly as possible and stop the carnage and financial bleeding that will bring us to our knees and force us to stop that which we should have never started.

We all know, in time, the war will be de-funded one way or another and the troops will come home. So why not now?

Refuse to Comply With Unconstitutional Laws

House vote to deny IRS hiring 87K new agents causes internet uproar: 'Which side are you on?

Turkey Adopts Legislation That Could Jail Journalists For 'Disinformation'