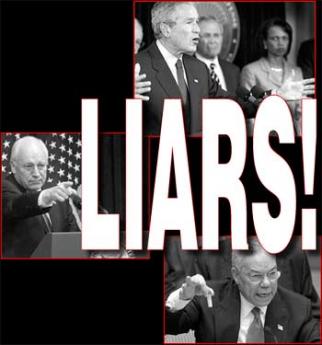 Today I heard again, from Peter Lance on the Charles Goyette Show (KFNX
1100, Phoenix), about his pissing contest with Larry Johnson an
ex-CIA analyst with shaky credentials. Goyette has used both men on his
show and feels, as he stated, that he has gotten good information from
both of them.

This triggered my second investigation into the whole "ABLE DANGER" and
"911" affair around which a lot of scapegoating, fingerpointing, denial,
re-invention, myth, coverup, and....."classification" rebuttal still exists.

About an hour into my re-research on this clogged and
imminently-eruptive field, I was reading a statement made before some
Congressional Committee by
one of the ABLE DANGER guys and, right at the point that an inquiring
mind is thinking, "here, right here--he's going to disclose and admit
to what happened",
the guy says: "The REASONS for that are in documents classified as
secret and I cannot discuss them."

Or words to that effect.

Already tiring of the punch, counter-punch, nuanced rope-a-dope,
dance-around of people with access or no access to "classified
reasoning", I folded my research tent, killed my browser, terminated my
connection to the Internet by turning off my computer and walked away.

Finally, it hit me.

It's like the unfaithful guy using "classification denial" with his wife.

IT'S AN ADMISSION OF GUILT!

I'm a simpleton, but that's what I'm going to go with from here on in.

Whenever anybody in government invokes classification denial, I'm going
to say "He's guilty."

Or he's covering for someone else who's guilty.

The point is: when they invoke "classification" at a crucial point,
they are admitting that something is wrong and they don't
WANT to talk about.

Why do I say this?

Tell me any "reason" for going to war that needs to be classified.

There is NO REASONABLE "REASON" FOR ANY KIND OF COVERUP FOR ANYTHING
CRIMINAL.

We're not dependent children here, wanting to know how and why 9-11
happened.

We're savvy, jaded adults. And if I ask you "why" and you give me
"classified", I know you're guilty.

Of course, I don't specifically know what you're guilty of, just like
the gal didn't know who her man done it with;
but she knew, from his "classification denial" that he done it. And she
didn't know why he did it. She knew that
the why didn't really matter. He done it. And he wasn't admitting it,
nor offering to make it up, nor begging for mercy.
So, she used simple logic and made the logical move.

Relationships are built on trust. Classification denial is just another
breach of trust. Relationship gone.

We need to do what any self-respecting woman would do in such cases:
D-I-V-O-R-C-E. And no mercy.

Goyette might be getting good information from both Peter Lance and
Larry Johnson--both of them self-promoters in
the extreme in the new internet age--as far as it goes. But, when they
run you into the "classification denial" wall, brother,
I--for one--know what lies on the other side of that door.

Guilt. Let's divorce our "occupational government" and start over.
Me--my investigation of the 9-11, Al-Qaeda, "security community"
and our damn "government" in Washington, D.C.--a non-represented entity
owned by us--is over. They are guilty. I'm divorcing them.
Again.

For reasons that are.....classified OBVIOUS. :-)

Absurdities Of Our Times In America

Growing Old In A Country You No Longer Recognize

Green Energy: What It Really Costs You

Greatest Practical Joke In America: Will "Lia" Thomas--A Guy In a Girl's Swimsuit