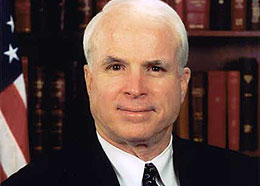 Back at Home, McCain Annoys the G.O.P. Right

By JENNIFER STEINHAUER for the New York Times

SURPRISE, Ariz., Feb. 13 — The chairman of the local Republican Party here in the most populous county in Arizona has in his possession a bright yellow button with a black line slashed through the name McCain.

“I don’t wear it out very often,” said the chairman, Lyle Tuttle of the Maricopa County Republican Committee, in a slightly sheepish coda to a 20-minute vituperation about the state’s senior senator, served up from his living room chair.

“I think those who do not support Senator McCain,” Mr. Tuttle continued, “if they could just get the word out and help people to understand what has happened with him, we could have an impact.”

No doubt about it, Senator John McCain, the Arizona Republican who would like to be president, is a popular man in his state, having won re-election in 2004 with about 76 percent of the vote.

But a vocal slice of the state’s most conservative Republicans, reflecting concerns about Mr. McCain held by some conservatives nationwide, are agitating against him in a way that they hope might throw off his incipient presidential campaign.

In a recent telephone poll by Arizona State University, 54 percent of the state’s Republican voters who were queried favored Mr. McCain in a presidential primary next February, a small enough majority to incite his critics and encourage some Republican rivals.

“Arizona is one place where we are very well organized,” said Kevin Madden, a spokesman for the presidential campaign of Mitt Romney, the Republican and former Massachusetts governor.

“We think we can go out there and make the case on pro-family issues, on fiscal issues and on strong borders,” Mr. Madden added.

Meanwhile, disgusted with Mr. McCain’s position on proposed changes to immigration laws (he advocates legalization that would not require illegal immigrants to leave the country), with what some see as wavering on the issue of gay marriage (he lent his name to a state ballot initiative to ban it but did not support a constitutional amendment), and with the campaign finance act that bears his name, some Arizona Republicans are making trouble for Mr. McCain.

They have elected local party leaders whom he opposes, criticized his policy positions and thrown early support to other potential primary candidates — all in the hope of tripping up Mr. McCain on his own doorstep.

“They can make trouble for him,” said Bruce D. Merrill, an Arizona State University political scientist and polling expert. “It is too early in terms of voting to tell, but it certainly could potentially affect people’s decision to give him money.”

The senator’s supporters are quick to write off the detractors as a fringe of the raucous state party that will be flattened like pita bread once primary day arrives next year. As a practical matter, Mr. McCain’s supporters point out, Arizona’s large swaths of independent voters can vote in the Republican primary, which will be a boon to Mr. McCain even if he loses some votes within his own party.

“When I was a little kid, I was really into western movies,” said Matt Salmon, former chairman of the Arizona Republican Party, who resigned with the intention to work for Mr. McCain’s presidential campaign. “In one of those, the cavalry was outmanned by attacking Indians, so they put a bunch of branches on the backs of horses, who then kicked up a lot of dust to make it look like there were a lot more people than there were. These guys drag around a lot of branches and kick up a lot of dust.”

Outnumbered or not, Mr. McCain’s critics now hold leadership positions in Maricopa County, the state’s most Republican enclave and biggest media market, which includes Phoenix. Their passion about the immigration issue, their flirtations with other candidates and their persistent harping underscore the skepticism about Mr. McCain that already exists among many hard-line conservatives here and around the nation.

They have been angered by Mr. McCain’s opposition to tax cuts backed by the White House; by his immigration position, which places him on a collision course with other Republicans; by his moves to close a loophole on gun purchases; and by his vote for the fetal stem cell research bill.

The Maricopa County Republican Party recently conducted a straw poll that depicted Mr. McCain as losing badly to Representative Duncan Hunter of California, a conservative unknown to the majority of Arizona voters, then touted it with unmasked glee. The poll was derided as a sham by Mr. Merrill, the political scientist, and others who questioned the methodology.

Among some Republicans here, Mr. Romney, a Mormon who may benefit from his faith’s strongholds around the state, is also mentioned as a viable alternative to Mr. McCain. Mr. Romney is supported by Joe Arpaio, the Maricopa County sheriff, among others.

Mr. McCain “can’t just take it as a given that he is going to win here,” said Randy Pullen, the new chairman of the Arizona Republican Party, who got the post by narrowly defeating a more moderate Republican backed by Mr. McCain. “He is going to have to work.”

In some ways, Mr. McCain’s troubles here reflect a fracas within the state party that has pit its more centrist members, long the stronghold of its leadership, against its most hard-line factions who call Mr. McCain “elitist.”

For several years, various critics have complained that he has been aloof, that he has a brittle temper and that he has made missteps on key conservative issues.

Although Mr. McCain was ultimately victorious in the 2000 presidential primary, Gov. Jane Dee Hull of Arizona, a fellow Republican, took the unusual step of endorsing his opponent, George W. Bush, who was then Texas governor.

In 2001, two unsuccessful recall movements arose against the senator. In 2005, some groups around the state that advocate a strict deportation policy for illegal immigrants wrote letters of censure or displeasure attacking Mr. McCain for his stance. “The grass roots are burning mad,” said Gary Watson, former chairman of the Mohave County Republican Central Committee. “We want to defend our borders. We don’t want them to have citizenship.”

So who would be better for Arizona?

“I am real excited about Rudy Giuliani,” said Mr. Watson, even though the former New York mayor has a more liberal record on abortion rights, gun control and gay rights than Mr. McCain. “The social issues are a little bit looser than what I appreciate,” Mr. Watson said. “But he is stronger than McCain on the border issue, and the border issue is so immense to deal with.”

While much of the rumbling against Mr. McCain is among party leaders, they have managed to leave an impression among some voters.

“I could be persuaded to vote for someone else,” Kathleen Hall, 60, a Republican who supported Mr. Bush in 2000, said as she sipped coffee in a Scottsdale outdoor mall this week. “McCain is not my favorite candidate. He would just as easily tomorrow turn into a Democrat.”

Mr. McCain, who was elected to Congress from Arizona in 1982 and who succeeded Barry Goldwater in the Senate in 1986, does not appear to be shivering.

“Folks recognize that he is a principled and committed conservative who has delivered for his constituents,” said Danny Diaz, a spokesman for Mr. McCain’s presidential exploratory committee.

And plenty of people think it is a fool’s errand to try to prove otherwise.

“Anybody who thinks John McCain wouldn’t win a Republican primary in Arizona is not living in the real world,” said Mr. Merrill, the Arizona State University political scientist.

That does not mean they won’t try.

“He would do a lot better in the general here than he would do in the primary,” said Jack Hustead, who chairs the Apache County Republican Committee, “because in a primary, there are other options.”