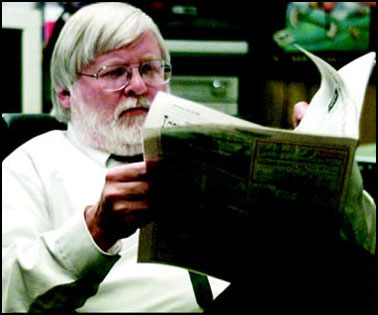 W. Leon Smith was a believer. When he started his newspaper The Lone Star Iconoclast in Crawford in 2000 he believed that George Bush would be an asset to the community and the country.

Time and events have changed that.

When Bush was inaugurated in 2001, America had a budget surplus. But by September of 2004, Americans faced the worst budget deficit in history, were mired in war, seeing its sons and daughters returned home maimed or in coffins, and facing a rapidly deteriorating economy.

With his co-editors, Smith sat down again to go over the issues. The paper always made endorsements. Their editorial policy was not focused on partisan politics but on simply doing the right thing. Ignoring party loyalty, . Smith declared that what really matter was character and keeping faith with those who elected them.
The three editors at The Iconoclast objectively considered the issues; they assessed George Bush and John Kerry as if they were prospective employees, acting for all Americans. They counted up the time George Bush spent on vacation, more time off than any other president in history.

They looked over the toll taken by the War in Iraq . Then they turned their attention to the emerging patterns of corruption that revealed an agenda having nothing to do with serving the American people. Billions were disappearing into the maw of such corporations as Halliburton through contracts that never went out to bid.

George Bush ' s popularity had waned in other parts of the country, but in Texas his approval rating still stood at over 80%. Smith knew the risks. He was cautioned that publishing an endorsement of John Kerry in 2004 could cost him his business
.
On September 29, 2004 , the Iconoclast endorsed John Kerry with a half-page editorial that became the talk of the nation and the world. The passionately worded editorial was downloaded and reprinted millions of times over the next months.

Over and over again the Iconoclast ' s servers crashed because of the volume. The three phones in the Iconoclast ' s offices were not still for weeks. At first, most callers were angry, abusive, obscene with whoever answered the phone. Then, a change started to take place. The number of calls continued to keep the phones busy around the clock but the reason for the calls changed. People from Texas and across the country and then the world began to express their gratitude. The Iconoclast had spoken for them, outlining their concerns and issues succinctly and objectively, they said.

At first it had been difficult for the Iconoclast employees to endure. Employees were harassed and threatened as was Smith. Reporters were prevented from just doing their jobs. A campaign was mounted to boycott the paper, threatening advertisers with boycott of their businesses if they continued to advertise in The Iconoclast.

A group in Clifton, where the Iconoclast headquarters are located, began to call for Smith's removal as Mayor of the small town. A delegation of local people came en mass to the offices of the Iconoclast to tell Smith they intended to "run him out of town."

Smith held his ground truth, and at no time did he choose to rescind the editorial.
Courage comes with the Smith heritage. The Smith family and Texas have a long history.

Erastus "Deaf" Smith, Leon Smith ' s great-great-great-great uncle, first came as to Texas from Mississippi Territory in 1817, having been born in New York and later living in North Carolina . Deaf had lost his hearing from a childhood disease. In 1822 he was married and living near San Antonio.

During the course of the Texas War of Independence Erastus Smith would earn the deep respect and gratitude of Stephen Austin and Sam Houston. His work as a spy for the Texans would provide the information that won Texas ' s independence.
Wounded in battle, he returned to duty in time for the crucial battle for independence, where he played a key role. It would be Deaf Smith who discovered the fate of those at the Alamo and who escorted Susanna W. and Angelina E. Dickinson, now widows, to safety. It was to Smith the phrase, "Remember the Alamo ," would be ascribed.

On April 21, 1836 , Smith, under orders from Sam Houston, destroyed Vince ' s Bridge to prevent the retreat of the Mexican army. Smith always accomplished his mission. He died November 30, 1837.

The Editorial, as it came to be known, set the issues that would be raised during the Presidential debate then pending. That editorial began by pointing out that few Americans would have voted for Bush if they had realized he would:

Give tax cuts to businesses that sent American jobs overseas, and, in fact, by policy encourage their departure.

Give away billions of tax dollars in government contracts without competitive bids.
Involve this country in a deadly and highly questionable war, and

Take a budget surplus and turn it into the worst deficit in the history of the United States , creating a debt in just four years that will take generations to repay.

These were elements of a hidden agenda that surfaced only after he took office."

The Editorial was reasoned, deeply researched and well documented. It had needed to be said; no one else had said it. Despite that or because of it Smith became the focus of media attention himself. Everyone from MSNBC to college newspapers throughout the country wanted an interview and many came to Clifton to get it.

Leon found himself working around the clock, even giving interviews at 4 in the morning. Work on the paper backed up but always, finally, went out. Smith found himself hammered; every statement made in the Editorial scrutinized and questioned in exhausting detail. But he knew that he needed to be available. To do otherwise could be deemed as backing away from the truth.

• On November 3rd, 2004 the Iconoclast ran a story on overcharging by Halliburton.

• On December 1st it reported the Congressional investigation of voting irregularities.

• On December 12 the report of the offer off $100,000 from Jimmy Walters for proof that the World Trade Center had collapsed as reported by the governmental investigation was on the front page.

• February 9, 2005 Unexpected Illness, Medical Bills Cause Half Of All Bankruptcies

• March 2, 2005 Lessons of My Lai :Army Whistleblower Urges Public To Do The Right Thing

In the next months the readership of the Iconoclast would change. Few now subscribed from the local area, but the on-line edition was read across the country and internationally. As corporately owned media within the United States was stifled and issues that were public knowledge in Europe and elsewhere globally, Americans could find the truth reliably on the pages of the Iconoclast.

The Iconoclast became the newspaper for Americans who want the truth and for those in other countries who wanted a real American paper. Print copies began to be mailed out around the world.

The migration of Depleted Uranium came to the attention of Americans through the Iconoclast as did other issues that otherwise would have remained unknown to the general public.

While The Iconoclast had become a major source for the truth, this work carried out by a staff of three incredibly brave and intrepid people, Mr. Smith still felt as if major stories were slipping through his fingers because of the lack of staff, money and time.

Smith had also begun to receive e-mails and phone calls from people deep within the Bush Administration and in multinational corporations who had information they knew should be available to the public. They knew he could be trusted because of his unwavering bravery. Stretching his resources to the limit, Smith worked around the clock to make as many of these stories available as possible while still ensuring that the documenting research would be available to protect the paper ' s continued existence.

Over and over again it would be an article in the Iconoclast that would awaken Americans to issues that did not appear in the mainstream media. But Smith faced the frustration of limited resources. Not all of these invaluable leads could be followed up. Whistleblowers were equally stalwart, and unwilling to go elsewhere; they knew Smith was to be trusted and many were putting their lives and livelihoods on the line.

America was experiencing another division; this one not on the ideological divide but based on Internet access and whether the Internet was used as the most reliable source of news. Americans were confused by the best way to get their news. In the blogosphere the state of affairs was clarifying. For the rest of the country it remained opaque. Attempts to limit Internet access were stepped up by the administration. At the same time, activist organizations, such as Velvet Revolution, Code Pink, and After Downing Street and a host of others began to step up organizing against the war and in opposition to the Bush Administration but no one could penetrate into the mainstream.

Then, in August of 2005 Cindy Sheehan went to Crawford , Texas to confront George Bush. Camp Casey sprang into being; the media arrived ready to shoot at their usual Bush clearing his boring brush story, but events would prove them wrong.

The Iconoclast had covered a Sheehan story recently, but now Smith and one of his fellow editors decided to follow the events in detail, through cell phones providing hour-by-hour or even minute-by-minute coverage of the drama playing out at Camp Casey and at the Crawford Peace House.

Then, Hurricane Katrina hit New Orleans and Americans received a closer look at the stunning lack of compassion of the Bush White House. The stories flowed out, directly through readership then through the blogging community.

The activist world had come to depend on the Iconoclast as someplace they could go for the truth and the Iconoclast intensified its mission to meet that demand.
In the following months the use of cell cameras and links to video and audio would flesh out the approach the Iconoclast had pioneered while the choke hold of corporate ownership continued its drive to cut activists off from the mainstream. The case of a student at UCLA, battered by campus police, would gain visibility through observers using their personal devices. In Iraq the use of camera cell phones was banned.

The race for the hearts and minds of Americans had become grim, the outcome depending on factors not yet in evidence. As the number of issues and activists increased so did the crying need to break through to America . Would it happen in time? The jury is still out.