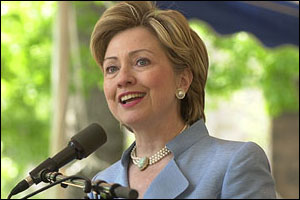 Sen. Hillary Clinton's money quote at Wednesday's Nevada forum of Democratic Presidential contenders: "Clinton said the U.S. can't cut money for its troops but should cut money going to the Iraqi army `because they are not standing up and fighting.'" (Click Here to see the page, among other sources) I hope Sen. Clinton will apply the same logic to the rest of America's budget, for example:

· Is she willing to de-fund HHS, which spends hundreds of billions of dollars every year while more Americans get fatter and fail to secure insurance?

· Or the US Department of Education, spending billions to trap American children in a failing public school system that has the virtue of turning kids stuck in it dumber every year, relative to their international peers, and which bores almost a third of its high school students into dropping out?

· Is she willing to do away with the gas and airport taxes, which generate billions of dollars every year that hide the size of the budget deficit but do nothing to relieve congestion or maintain America's roads and bridges?

· Is she wiling to eliminate the IRS, with a budget exceeding the Federal government's budget deficit, which fails to capture hundreds of billions of dollars a year in revenue?

The list is endless, but the point remains: what's sauce for the Iraqi military is certainly sauce for domestic sacred cows.