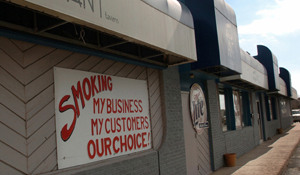 This past November 51% of Arizona voters determined that business owners were incapable of determining whether they should allow their customers to smoke in their establishments. Already determined is that Arizonans are apparently unable to determine whether the benefits of frequenting establishments that allow smoking is worth the possible risk to them. All that is left now is for the burocrats to determine all the details such as whether 15 feet or 20 feet is right distance to keep smokers from entrances.

Arizonan’s seem to be complying thus far in preparation for the May 1st implementation of the new law. If Colorado Springs is any gage however some may not go quietly into the night.

As the Colorado Springs Gazette Reports:

Several Colorado Springs bar owners are rebelling against the statewide smoking ban, inviting their customers to openly defy what they call an “illegal law." Bruce Hicks, owner of Murray Street Darts, met with nearly two dozen other bar owners and managers Wednesday, encouraging them to join a “civil disobedience” protest that calls for businesses to collect $1 from each smoker for a “get out of jail fund." The businesses will go to court to fight tickets they are issued for violating the smoking ban and use the fund to pay fines, Hicks said. The fines are $200 for a first offense, $300 for a second and $500 for any others written within a year.

The eight-month-old smoking ban has cost him 25 percent of his business since it went into effect, Hicks said. He began allowing smoking in the bar three weeks ago, he said, which has “brought back my 25 percent.” Hicks said eight businesses had agreed to join the rebellion last week. Owners of three — the Adam’s Apple Lounge on Austin Bluffs Parkway, DJ’s Bar and Grill on East Fillmore Street, and Hicks’ bar on Murray Boulevard — confirmed their involvement to The Gazette.

Hicks said if business owners vigorously fight the tickets in court, prosecuting the cases will be more of a burden than the fines. “It’s going to take the state of Colorado $6,000 to collect $200,” Hicks said. “How long do you think the public will allow that?”

Since Colorado is 10 months ahead in terms of their smoking ban implementation it may be worth watching how the standoff plays out.

1 Comments in Response to Bars Rebel Against Smoking Ban

The easy way to beat the stupid law.
If you want to allow your customers to smoke
simply hold church services in your bar.
Let the cops suck on that lemon.

Holocaust survivor landlord blasts squatter who has 'destroyed' her furniture, ....

What Would a World Without Personal Property Look Like?

Private Property: The Bedrock of Civilization

At Least 5 Justices Seem To Think the CDC's Eviction Moratorium Is Illegal.