“Don’t you listen to Free Talk Live” she asked. "Um, I don’t think so" I answered.

“Isn’t that some pod cast by a couple of kids or something” I offer weakly.

I am engaged in a discussion at last weeks New Hampshire Liberty Forum and quickly becoming aware that I am way out of the loop. I am speaking with a woman in her 40's from Tucson AZ.

The cherished project of it’s co-hosts Ian and Mark, FTL leverages all of the latest internet technologies. Employing a very open business model, FTL eclipses some of the biggest names in talk radio when it comes to deploying new technology. Although Ian and Mark operate on a meager budget. Technology has enabled them to create a relatively large footprint accross multiple media types and in multiple markets.

A trip to the FTL website will reveal an entire community of libertarian listeners. Of course their home page includes archived mp3 files of all their shows as well as rss pod cast feeds, but there is much more. 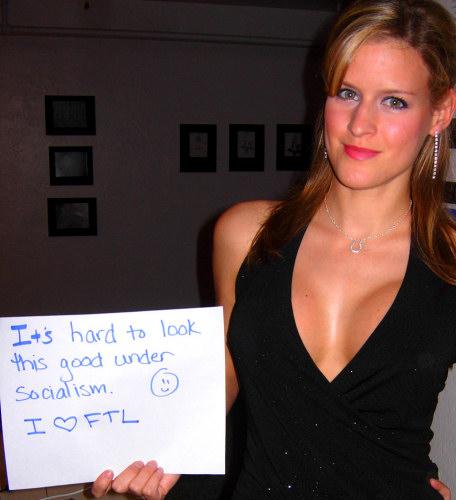 The FTL web forum boasts over 11,000 topics and 200,000 posts by more than 1500 members. And lest you think this is just dry pointless debate over the finer points of libertarian thought, consider the “shrine”. The Shrine is a section of the FTL forum devoted to proudly displaying the “verified” photos of FTL’s female listeners. Yes guys there are female libertarians.

FTL also features their own wiki. Containing over a thousand pages covering personalities ranging from the Anne Coulter to Harry Browne and issues from Net Neutrality to Government Schools.

Although much of the content on the FTL wiki is of similar quality as one would expect on Wikipedia, some topics are covered in a more colorful manner. Consider the FTL wiki entry for Anne Coulter: 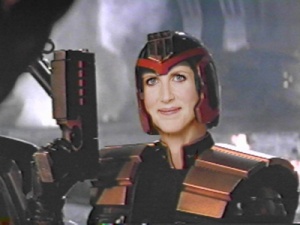 Ann Coulter is a right-wing statist, Bush Administration fellating, disgustingly pencil-thin horse-faced man in a woman costume. Coulter is widely believed to be an experiment in gene splicing between humans, lemurs, and pug dogs; he/it/she is quick to blame Democrats and Canada for everything wrong with the world while simultaneously decreeing anything that a Republican touches instantly turns into gold; according to her anyone who is not a Republican is morally depraved and needs to be led by her political party which is the only one capable in her mind.

FTL's hosts Ian and mark are unapologetically libertarian. Mark, the self described minarchist who believes in shrinking government to it’s smallest possible size is the butt of a running joke where Ian, a "Harry Browne libertarian" and some listeners call for his firing due to his “statist views”. The general consensus of the show's hosts is that anything worth doing should not be left to government incompetence and anything the government is doing either shouldn’t be done or would be done far better by the private sector or some homeless people.

Although they agree on much, the slightly differing views of the co-hosts strikes a balance and is the impetus for some interesting banter.

Topics covered in the past few days on FTL include:

FTL’s popularity seems to be growing. Their pod casts have been top rated at pod cast ally for some time. In some over the air markets they have beaten such giants as Rush Limbaugh in the coveted over 25 male demographic.

All of FTL’s web features are completely free. Ian and Mark have employed a unique twist however in their fund raising efforts to support the growth of FTL. Rather than solicit simple charitable donations from listeners, they have created what they call AMP (Advertise, Market and Promote). In this program, “Amplifiers” make small monthly contributions starting at as little as $3 per month. The funds are dedicated to promoting FTL and enhancing the listener/user experience.

The Amp web page lists current contributions at $2500 per month. One feature of the amp program is that listeners will see new FTL web features as the AMP contributions reach new milestones. For example the following monthly contribution milestones will bring these new features to listeners:
$2,500 - the addition of a webcam to the FTL site.
$5,000 - commercial airtime will be reduced.
$7,500 - streaming 24/7 pod casts to be added.
$10,000 - additional commercial air time will be dumped and some big, unspecified surprise is promised.
Free Talk Live will likely be challanging for those who's critical thinking has been dulled by years of Rush and Hanity. Liberals will no doubt be appaled at such flagrant support of the free market. Few will be bored however.
Check the listings or log on and listen via the internet(s).
Oh ... ladies if you decide to submit your picture to the shrine, please copy us too.

2 Comments in Response to It's Not Just Talk Radio, It's An Adventure

Do you even proofread your articles? Clearly not.

That was rhetorical right?

FWIW I have forwarded your comments to the proof reading department.