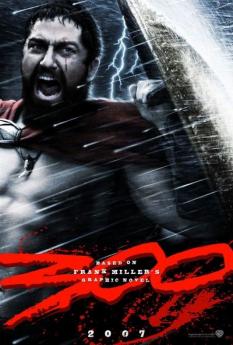 I'm reminded of the scene from "Airplane", where Peter Graves, playing the senior pilot, says to the young lad visiting the cockpit, "So, Timmy,...do you like movies about gladiators?"
Well, Spartans and gladiators aren't exactly the same thing, as your college history professor would point out to you. But if you take your wife or girlfriend or significant other to see this flick, you might wonder why, uncharacteristically, they are paying such close attention to what certainly qualifies as a blood-spurting warrior movie. (Just imagine some of the gorey screaming scenes of Braveheart, but with a touch of John Woo slow-motion style.) Because the actors portraying the spartans are such gorgeous beefcake, of course!
But aside from half naked men all oiled up and running around in leather and capes, what else is there to this story? 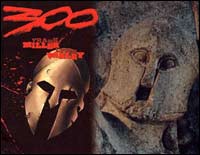 Well, if you know of the Spartans and the battle at Thermopylae, then you know the story. But thanks to the state of public education, most people do not. For those of you who slept through Ancient History 101, Sparta was a small area of ancient Greece that was its own nation and a rival to Athens for control of the region. The rulers of Sparta, like most places in the world, came from elsewhere, and dominated the the original population by force. But the elite spartiate (the ruling class) held it all together by means of the fiercest fighting men the world had yet known (and some say have yet since). Their opponents wrote of them, how can anyone defeat a population whom from childhood have been tought to fight? For these men, not all that different from Samurai, their greatest glory they could ever achieve in their life was to die well for the glory and defense of Sparta. 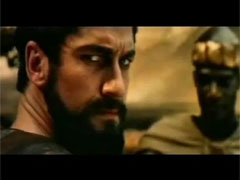 And so it was, as the movie shows, that King Leonidas (portrayed by Gerard Butler) and 300 of the best of the best of his soldiers got their chance to do just that. The marauding and conquering Persian hordes, under King Xerces come to Greece. Like any good imperial effort at conquest, agents are sent ahead to tell the targeted people that they may avoid war if they will submit to Xerces and accept domination. In the birthplace of philosphy and critical thinking, were the idea of democracy was born, such offers tend to offend Greek sensibility, especially that of a Spartan king. There will be no submission.
And again, as in any well organized conquest, payolla is offerred by the Persians to those who may wish to improve their status and assist in their coming to power. This money ends up the darndest of places. Leonidas prefers to march out to fight the Persians on his terms at a place of his choosing. But, uniquely Greek, Leonidas also has to abide by a counsil (a sort of congress) as well as religious culture and heritage, all whom resist aggressive and pro-active response to the Persian pressence, who are still some distance away. Every fiber of Leonidas' training and experience tell him he must take the fight to the enemy, but his hands are tied,...sort of.
In a sly move President Bush would appreciate (but would never be brave enough to do himself), Leonidas decides he shall go for a stroll,...to the northern coast. And rather than take the Spartan army, as he is forbidden, he instead takes a 300-man "bodyguard", composed of the best of the best. His special forces, if you will. The counsil cannot command the king in where he shall travel, and they cannot deny him the protection a king is due. So off they go to look in on these persian chaps.
Leonidas knows his force is small. He also has great confidence that they are capable of feats that would otherwise demand many times their number.

He is mindfull of his duty to protect the nation, and knowing he can't really do it with only 300 men, he is rather optimistic that were he to be martyred at the hands of the Persians, the army of Sparta would HAVE to rise up, and the king would be glorified for all time having died well, yet also having succeeded in getting his nation off its butt and to engage in the fight.
Hmmmmm. Are we seeing parallels to modern times here? The king wishes to attack the persian threat, but congress won't let him, so he goes outside the lines to make it happen anyway. Everything new is old.
But what isn't old is the style in which the events are portrayed. Though this is one of the most repeated tales of the ancient world and is famous for many reasons, the same cinematic team that brought us the back-lit gritty noir imagery of Sin City paint the digital canvas of anciant Sparta with similarly magical brush strokes of light and shadow. Though the lighting is forboding and obviously enhanced for dramitic mood, one forgets in their submersion of the tale that this entire movie was shot on a single sound stage in England. The computer-generated effects guys have gotten so good at their game, you can practically feel the arterial spray on your face.
But it isn't just the men of Sparta who are tough as nails and spit in the face of adversity. Often neglected in the recording of history, women have always had a role in it along with the heroes. And the queen of Sparta is no exception. No wilting flower, when her man marches off without appropriate reinforcement or support to face the Persians, does she wring her hands and fret? Does she beg the gods for favor? Does she hold a bake sale? Hell no! She sets about, with her astute wit, to confront the counsil and others with their error. She shows that women of Sparta, anything but shy, have the bearing to do whatever must be done,...even if means geting your hands dirty. I won't spoil it for you by telling you how. And I must say, Lena Headley, who portrays the queen, plays this powerfull woman with such strangely seductive alluring assertiveness and sexy grace, I...well,...um,...the female movie viewers aren't the only ones deeply stirred in their loins. 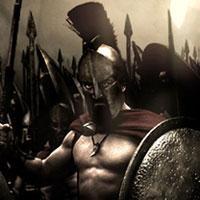 So, safe to say, it is visually stunning in many ways. A good time spent in escapism, which is what Hollywood best provides. But is it accurate? This is a historical tale, after all. Hollywood is known for having a maleable sense of history. Well, the big picture is mostly there. There are people who devote their entire lives to the study of Greek history and literature, so no one will likely ever make an all-encompassing depiction of Sparta or Persia or the Battle of Thermopylae that "gets it right". For instance, though King Leonidas pontificates to his men on the defense of freedom, viewed through archeological eyes, he was only referring to freedom for the spartiate, the ruling class. The average resident of Sparta was a serf, due to their lineage descending from the original culture the Spartans had invaded and conquered generations before. Little ugly facts like that don't usually make it into the scripts of tales like these. But if you enjoy this flick, and it makes you curious to know a little more about Sparta, Persia, Xerces or Leonidas,...then perhaps you'll crack open a book or do a google search. And then, in so doing, you will be exceeding the amount of knowledge the education establishment thinks you should be bothered with.
What would the ancient philosophers think of that?

Whoever Plays James Bond Next, Please Don't Make Him a Woke Bloke | Commentary

Chinese movie about military victory over America – commissioned by Beijing...