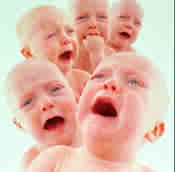 Boo-hoo!  American crybabies and health care
By Craig J. Cantoni
March 7, 2007
Americans are crying that health care is expensive.  It’s irrelevant to the snivelers that the gross inefficiencies of the health care system are due to the government killing a consumer market in health insurance and care 65 years ago and then burying the corpse 42 years ago with Medicare.  Like a baby having a temper tantrum, they just want the government to do something.
Meanwhile, roads are full of cars costing three times the cost of stripped-down models, restaurants are full of overweight people paying four times the cost of a home meal, bars are full of people paying five dollars for a margarita, shopping malls are full of people buying frivolous stuff on credit, convenience stores are full of people buying lottery tickets and four-dollar packs of cigarettes, casinos are full of people on fixed incomes, subsidized sports stadiums are full of people dropping a hundred bucks on tickets and five-dollar beers, a zillion Starbucks outlets are full of people paying five times what a cup of coffee full of fat would cost at home, ears are full of cell phones with high monthly charges, and houses that are twice as large as the houses of their grandparents are full of big-screen TVs, extra bathrooms and fancy stoves that are seldom used.
If you think that only rich people are spending money in these ways, you’ve been in a coma for the last 25 years.
Yet Americans snivel about rising health care costs and whine about a $25 co-pay for medicine or a visit to the doctor.  Worse, in the worst case of convoluted thinking since Marx wrote Das Kapital, most Americans want the government to give them free medical care, which is the most expensive kind of medical care, even though the government caused the inefficiencies in the first place.
DON’T AMERICANS UNDERTAND THE CONCEPT OF TRADEOFFS?
Sorry, I let my Italian emotions get the best of me.
Of course they don’t.  Babies can’t think beyond their immediate gratification.
The numbers are squishy and depend on the political agendas of the sources, but the average household spends per annum about $2,500 at restaurants, $9,000 in credit card debt, $8,000 in car expenses, and $13,000 in housing expenses.
Oh, let’s not forget the cost of government.   City, county, school district, state and federal taxes vary by locale and family, but where I live they consume almost half of the average household income.  The typical husband and wife will pay close to $200,000 in public education taxes over their lifetimes, and the cost of the federal government alone averages about $22,000 per household, not counting the $600,000 in unfunded liabilities per household for Social Security and Medicare.  Curiously, Americans aren’t demanding that the government do something about the skyrocketing cost of government.  Could the reason be that much of the cost of government is hidden?
If Americans downsized their homes and car engines by one-fifth, reduced discretionary spending by one-fifth, and cut taxes by one-fifth, they could easily pay their health care costs out of their own pockets and still have a higher standard of living than 98 percent of the world.
For god’s sake, please spare me claptrap about the poor not being able to afford health care.  An altruistic concern about the poor is not why most Americans are crying about health care costs while drinking double lattes and running up cell-phone bills in their status wagons.  Their crying because they’re spoiled brats who are just as immature as when mommy pulled them in a little red wagon.
Besides, it’s not necessary to nationalize the health care industry to help the poor.  Because some people can’t afford food, housing, clothing and transportation, everyone isn’t forced to buy food in government commissaries, to live in government housing, to wear government uniforms, and to take government transportation.
Don’t expect politicians to piss off voters by telling them to grow up, don’t expect newspapers to piss off readers by telling them to grow up, and don’t expect businesses to piss off employees and customers by telling them to grow up.
Well, I’m not afraid to tell them:  Grow up and piss off!
_____________
An author and columnist, Mr. Cantoni can’t be found at Starbucks, but he can be reached at ccan2@aol.com.

Dozens of Governments Commit to Signing WHO Pandemic Treaty

Investigation Launched After 'Mystery' Surge in Deaths of Newborn Babies

They're Banning Abortion!? Everything You Need to Know

Your Healthcare - and Your Life - To Be Handed Over to WHO