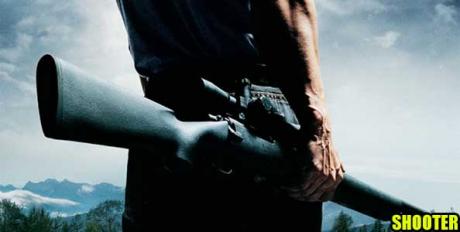 So, Haliburton HQ picked up and moved to Dubai, eh? Hmmmm. Maybe someone in the executive hierarchy saw the sneak preview of "Shooter" and finally got a clue how much the public 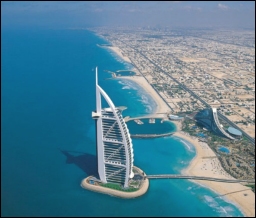 would like to see them receive a few well-placed bullets and decided it was time get out of Dodge.
What? Big powerfull barons of the machinery of gov't and the economy scared of a movie? Well, movies are often reflections of the public mood, and moods sometimes morph into ideas, which can evolve into action,...and when the action depicted in a major Hollywood picture climaxes with characters obviously based on Dick Cheney and his Halliburton pals getting plugged full of lead by a rightiously indignant patriot;...well yeah, that might cause some of those guys to snort a little brandy down the wrong pipe and hack and cough to catch their breath. (I rather like that mental image, actually.)
Mark Wahlberg plays a Marine Scout Sniper (some of the most highly trained killers the U.S. military produces) who on an officially non-existant mission in Ethiopa loses his partner and best friend. 3 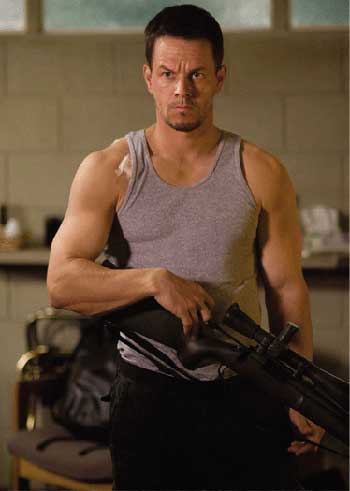 years later, Wahlberg is out of the Marines and just trying to live a quiet life up on a mountain in the wilderness in a cabin, with just him, his trusty dog and the internet. (I'm guessing he has satellite service.) He has learned that the world is filled with lies,...most of them government lies,...and this is part of the reason he is no longer a Marine and wants to be alone. He seems to be content.
But unannounced, Danny Glover visits him on the mountaintop. Glover is one of those formerly military guys who has laterally 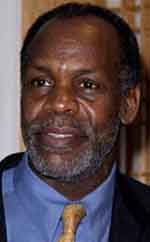 transferred into the executive branch, working for one of the alphabet soup agencies that drive the dark suburbans with deep tinted windows and who wear reflective aviator sunglasses. Somehow, a threat against the President of the United States has been uncovered,...partially. Glover knows some sort of master sniper is planning to make an attempt on the President soon. He also knows that the assasin was inside information on the President's movements and other sensative info. The inside source is unknown. For this reason, regular means of taking preventative measures can't be done without possibly alerting the inside guy. Glover has come to see if Wahlberg will act as a consultant (outside regular channels and off the record, of course) to try and determine how he might do the deed if Wahlberg were the shooter. With such analysis in hand, it would be that much easier to thwart and/or capture the real shooter.
At first, Wahlberg tells Glover to stick it in his congressional backside. "But I don't like the President.", he tells Glover. "Didn't like the last one much either." Yet, Wahlberg still has a spark of patriotism at his core. If something did happen to the President, and he did nothing to prevent it, how would he live with himself? Against his instincts, he takes the job.
But of course, the fact that he's a disillusioned, bitter combat vet loner who reads alternative press and believes the government lies regularly makes him absolutely perfect for Glover's REAL reason he has hired him. Because, if you haven't figured it out by now, Wahlberg is supposed to be a patsy. A mix of Oswald and McViegh. On the day when it is believed the mythical sniper is most likely to make an attempt on the President, the black bag boys shoot Wahlberg,...twice,...but with poor marksmanship, and Wahlberg escapes. Now on the run and framed for the shooting, there aren't many places he can go. But he was trained to escape and evade, to survive,...to turn in toward the enemy and engage and fight. (There is a very real lesson here;...if you shoot a Marine, make sure he's dead, or you will be S-O-R-R-Y!!)
Along the way, Wahlberg forms an unlikely alliance with an FBI agent he had to violently disarm and take his weapon and car from.

The agent knows something is just not right with the case against Wahlberg which just comes together far too easily and not very logically. About to lose his job with the bureau, the agent decides he might as well throw his lot in with nation's most wanted man and make a

desperate gambit to see if they can find out who really is behind all this.

And so it is that they discover the 6-term Senator from Wyoming, who is obviously meant to resemble Dick Cheney (he even goes bird-hunting and drinking, like Dick) and played by Ned Beaty, is at the center of this cabal. What kind of cabal, you ask? Oh, nothing out of the ordinary. Just your average bunch of corrupted elected and unelected types who pervert the tools of government and power to make money and try to run the world sort of thing. Nothing unusual, really.
So Wahlberg gets the goods on these bad dudes (but has to shoot a bunch of guys and blow up much of the Tennessee countryside to do it), saves the girl (its Hollywood, there HAS to be a girl) and dutifully hands everything over to the FBI. Geez,...some guys just have to keep learning the hard way. Obviously, the Justice Dept. is manipulated behind the scenes just enough that the truly guilty people go free, but so does Wahlberg after he demonstrates rather dramatically that his rifle could not have fired the fatal shot.
And this is where is gets scary for the Halliburton types out there, reading their secret advance copy of the script. (WARNING: Plot ending about to be revealed!!!!!)
As Beaty and Glover sip cognac around a cozy fireplace, laughing at how they have once again pulled the strings of government to see their own asses pulled out of the fire and their billion-dollar ill-gotten ventures secured, a black-clad ninja-like figure assaults the house, killing nearly everyone before anyone realizes what's happening. Finally, cowering in fear of his life, yet indignant that he has been reduced to this, Dick Cheney's Hollywood representation spits back at Wahlberg, "I am a United States Senator!!!!"
"Exactly."     BLAM!!!!!
And would you believe the audience cheered? Scout's honor. Maybe there is hope for the electorate after all?
Had the movie not had that nifty ending, I might rate this film at 3.5 or 4 stars. But whenever a movie shows the 2nd Amendment being used rightiously for its intened purpose, that's just an automatic 5 stars. The special effects could have been so crappy that you see the wires holding the plane in the air, and it would still get a 5. I'm a sucker that way.
Now if the guys who made this flick can just be talked into doing a plot revolving around jury nullification....

If total government control equals safety, why are prisons so dangerous?

"A good friend will come bail you out of jail.... But a true friend will be sitting next to you saying "Dang... WE screwed up!"

A sociopath can never do anything wrong, no matter how hard they try,...sorta like a government.

"In the beginning of change, the patriot is a scarce man; brave hated and scorned. When his cause succeeds, however, the timid join him, for then it costs nothing to be a patriot." Mark Twain

"Among the many misdeeds of the British rule in India, history will look upon the act of depriving a whole nation of arms as the blackest." Gandhi

"(conservatives) don't have the cojones for freedom any more. The mere existence of libertarians wounds their poor, shriveled souls, because, by supporting the right wing socialist policies of George W. Bush, they have cravenly surrendered to the left wing socialism of Hillary Clinton." L. Neil Smith

Why The Laptop Got Left // from Tore Says [Music Video, My Son Hunter Film]