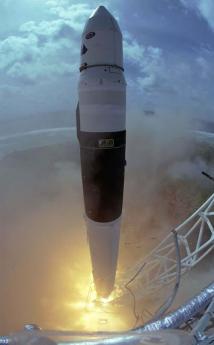 Falcon 1 first launch, exploded some 35 seconds into the flight
From Elon:
At present, it appears that we are on track for a launch next week, possibly as soon as Monday. We had a very successful static fire yesterday that proceeded smoothly with no aborts.
Our initial review of the data showed that the rocket functioned almost perfectly. The only remaining concern is that the GPS portion of the guidance system showed an anomaly about 15 minutes *after* the static fire.
Falcon 1 is designed to achieve its target orbit purely on inertial navigation, so the GPS, while helpful for improving orbit inseration accuracy, is not flight critical.
We are carefully analyzing the GPS and, more importantly, are making sure that the GPS problem does not hint at some larger issue. I will send out an update on Sunday confirming what day we will have our first countdown attempt. In the meantime, here are two videos of the static fire, one from a medium distance camera and one from a high speed close up camera. There will be a total of 12 cameras looking at the rocket on launch day, including two thermal imaging and two vehicle cams, so no shortage visual data.
I know it has been a year since our last launch and some people are wondering if launch 3 will also be a year away if something goes wrong this time. The answer is definitely no. The reason it took us a year is that the vehicle on the pad and the ground support equipment have hundreds of robustness upgrades -- this is really Falcon 1 version 2.
There is nothing significant that we can think of to improve the vehicles under construction for the Dept of Defense and Malaysian satellite launches later this year. Therefore, no matter what happens, I do not expect there to be a significant delay in their approximate end of summer and mid fall launch dates.
On a separate note, we have made tremendous progress with the Falcon 9 development and I'm way overdue in posting a big update on progress. Should have that out sometime next month. Between ramping up for NASA COTS and the F1 launch, time has been a little tight around here :)
The videos of the static fire can be seen at:
MEDIUM: http://www.spacex.com/00Graphics/Videos/StaticFire%20HD%202007-03-16.wmv
CLOSE: http://www.spacex.com/00Graphics/Videos/StaticFire%20HScam1%202007-03-16.wmv