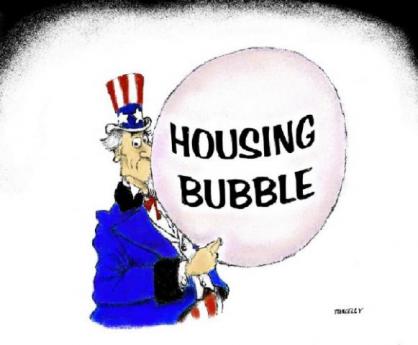 The place to place the blame
by U.S. Congressman Ron Paul, M.D. (R-TX)

March  19,  2007
The U.S. housing market, long considered vulnerable by many economists, is now on the verge of suffering a serious collapse in many regions.  Commodities guru and hedge fund manager Jim Rogers warns that real estate in expensive bubble areas will drop 40 or 50%.  Mainstream media outlets like the New York Times are reporting breathlessly about the possibility of widespread defaults on subprime mortgages.
When the bubble finally bursts completely, millions of Americans will be looking for someone to blame.  Look for Congress to hold hearings into subprime lending practices and "predatory" mortgages.  We'll hear a lot of grandstanding about how unscrupulous lenders took advantage of poor people, and how rampant speculation caused real estate markets around the country to overheat.  It will be reminiscent of the Enron hearings, and the message will be explicitly or implicitly the same: free-market capitalism, left unchecked, leads to greed, fraud, and unethical if not illegal business practices.
But capitalism is not to blame for the housing bubble, the Federal Reserve is.  Specifically, Fed intervention in the economy-- through the manipulation of interest rates and the creation of money-- caused the artificial boom in mortgage lending.
The Fed has roughly tripled the amount of dollars and credit in circulation just since 1990.  Housing prices have risen dramatically not because of simple supply and demand, but because the Fed literally created demand by making the cost of borrowing money artificially cheap.  When credit is cheap, individuals tend to borrow too much and spend recklessly.
This is not to say that all banks, lenders, and Wall Street firms are blameless.  Many of them are politically connected, and benefited directly from the Fed's easy money policies.  And some lenders did make fraudulent or unethical loans.  But every cent they loaned was first created by the Fed.
The actions of lenders are directly attributable to the policies of the Fed: when credit is cheap, why not loan money more recklessly to individuals who normally would not qualify?  Even with higher default rates, lenders could make huge profits simply through volume.  Subprime lending is a symptom of the housing bubble, not the cause of it.
Fed credit also distorts mortgage lending through Fannie Mae and Freddie Mac, two government schemes created by Congress supposedly to help poor people.  Fannie and Freddie enjoy an implicit guarantee of a bailout by the federal government if their loans default, and thus are insulated from market forces.  This insulation spurred investors to make funds available to Fannie and Freddie that otherwise would have been invested in other securities or more productive endeavors, thereby fueling the housing boom.
The Federal Reserve provides the mother's milk for the booms and busts wrongly associated with a mythical "business cycle."  Imagine a Brinks truck driving down a busy street with the doors wide open, and money flying out everywhere, and you'll have a pretty good analogy for Fed policies over the last two decades.  Unless and until we get the Federal Reserve out of the business of creating money at will and setting interest rates, we will remain vulnerable to market bubbles and painful corrections.  If housing prices plummet and millions of Americans find themselves owing more than their homes are worth, the blame lies squarely with Alan Greenspan and Ben Bernanke.
source: http://www.house.gov/paul/tst/tst2007/tst031907.htm

52% Of Millennials Live With THEIR PARENTS! - This CANNOT End Well!

The Fed Now Owns Nearly One Third of All US Mortgages