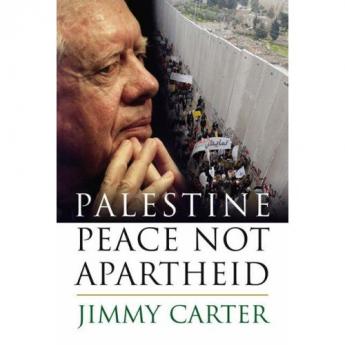 As we reported in our previous article, the upcoming Give Me Liberty 2007 conference will examine U.S. Middle East Policy through the prism of the U.S. Constitution. During the conference we will examine the work of professors Mearsheimer (University of Chicago) and Walt (Harvard University) titled, “The Israel Lobby and U.S. Foreign Policy,” and the book by Jimmy Carter titled, Palestine Peace Not Apartheid.

Substantial documentary evidence presented by Mearsheimer, Walt and Carter supports the argument that the United States has abandoned its own national interest and security to advance the interests of Israel, that neither strategic nor moral arguments can justify  America’s unconditional support for Israel, that the United States has become the de facto enabler of Israel’s unlawful expansion and military occupation of the Palestinian Territories, and that U.S. policy in the Middle East (including giving Israel well over $140 billion in U.S. income tax revenues) has been driven by the activities of the “Israel Lobby.”

Their work documents how the Israeli Lobby unashamedly boasts of its control over U.S. domestic and foreign policy and public opinion, and attacks any person or organization that criticizes or is perceived to be a threat to Israel’s interests.

According to Mearsheimer and Walt, “We use ‘the Lobby’ as a convenient term for the loose coalition of individuals and organizations who actively work to shape U.S. policy in a pro-Israel direction…The core of the Lobby is comprised of American Jews who make a significant effort in their daily lives to bend U.S. foreign policy so that it advances Israel’s interests.”

Referring to them as “extremists”, the Lobby has attacked columnist Devvy Kidd, constitutional attorney Larry Becraft, former IRS Special Agent Joe Banister, WTP Chairman Bob Schulz and others affiliated with the Tax Honesty Movement who have developed a substantial body of documentary evidence that conclusively proves the present federal income tax is an unlawful (Constitutionally prohibited) direct, un-apportioned tax on the labor of American citizens.

I am confident that the Israeli lobbists would also have tagged Diogenes with the label of, "extremist".

After all, expecting honesty in Government or any position which would suggest placing the interests of the American people first over the interests of Israel would indeed be regarded as "radical" and "extremist" by the Jewish controlled media and lobbists.

I am confident that the Israeli lobbists would also have tagged Diogenes with the label of, "extremist".

After all, expecting honesty in Government or any position which would suggest placing the interests of the American people first over the interests of Israel would indeed be regarded as "radical" and "extremist" by the Jewish controlled media and lobbists.

They admit they are NOT the people of the Bible. When will the so-called Christians bear witness to this Biblical
fact. Until that time nothing will change with US policy towards Israeli..

Unprecedented: US Air Force To Join Israelis In Mock Attack On Iran

Israeli troops sent to Ukraine and the Russians are irate.

When blood spills on Passover and Easter, it's time to build the Temple

How the Israeli government shake-up will affect US-relations