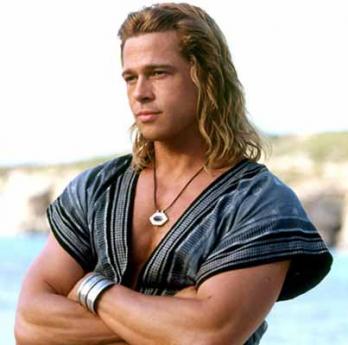 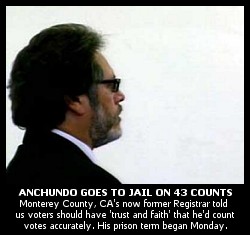 Why Nobody Should Ever Have to Trust an Elections Official: Tony Anchundo Reports to Jail
Former Monterey County Registrar of Voters Heads to Jail on 43 Criminal Counts, Stole More Than $80,000 in Tax Dollars from County
Once Told Us We Must Have 'Trust and Faith in Elections Officials, Or In This Case, Me'...
While he was still the 13-year Monterey County, CA, Registrar of Voters, Tony Anchundo once told us live on air that "There is obviously going to have to be some trust and faith in the elections official, or in this case, it's me."
On Monday, the disgraced Anchundo reported to jail after pleading "no contest" last December to 43 criminal counts of forgery, misapplication of funds, embezzlement, falsification of accounts, and grand theft...
COMPLETE REPORT:
http://www.bradblog.com/?p=4362 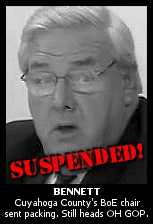 Bob Bennett, Ohio GOP Head and Last Holdout on Cuyahoga County Election Board, Suspended by Brunner
New Charges Announced Against Chair of BoE Who Refused to Resign: He Allegedly Ordered $15k PR Contract Awarded to 'GOP Spokesperson'
Ohio's Secretary of State Jennifer Brunner cleaned out the last dead-ender from the Cuyahoga County (Cleveland) Board of Elections today. That would be the chairperson of the BoE and the head of Ohio's Republican Party, Bob Bennett (see previous coverage here.)
Bennett was the last of the four directors of the Board of Elections (supposedly two Democrats and two Republicans) to leave the board of the state's most Democratic-leaning county. The other three resigned after requested by Brunner in the wake of the convictions of two Cuyahoga Elections Officials for rigging the 2004 Presidential Election recount, a raft of disastrously run elections and a new criminal investigation into malfeasance at the county election board. The new investigation includes the early printing of absentee ballot results and an unexplained network cable left attached to the central tabulator overnight.
According to a statement posted to the SoS website, Brunner notified Bennett today about his suspension in writing, and has also announced yet another new charge against him...
FULL REPORT: http://www.bradblog.com/?p=4363
France Fears American-Style 'Kafkaesque Balloting' on New Electronic Voting Machines
First Presidential Race to Use Paperless Voting Draws, Fear, Protests, Florida Comparisons, ES&S Spokesliars...
Dear People of France: Welcome to our nightmare...
“I don’t want to lecture America. But we don’t want France to fall into the same Kafkaesque balloting as happened in the United States,” the spokesperson for the French Presidential candidate said.
“We have an extreme amount of confidence in our machines in France...Our machines have proven themselves in thousands of elections in the United States and elsewhere," the ES&S spokesperson lied...
FULL REPORT: http://www.bradblog.com/?p=4364
Toon of the Moment... 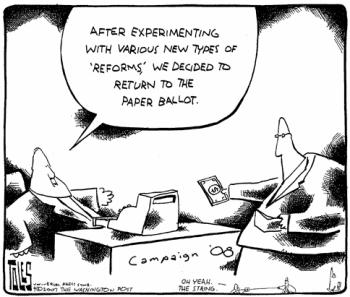 '2000 Mules' Is Selling Out at Theaters Across the Nation! -- Dinesh D'Souza Offers a So

Oh, so…. You're Saying We Were Right?