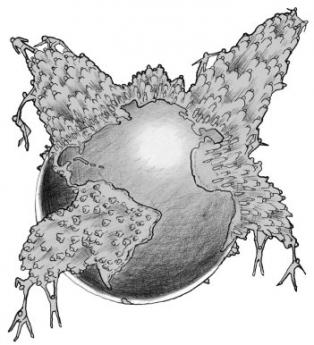 In 1950, grew toward 100 million people.  Today, it overflows with 144 million people. That might not be so bad, except for one thing: endures that many people in a landmass not much bigger than !

Dr. Alan Kuper, a man I admire and respect, illustrates our accelerating dilemma with metaphors that make sense.  He reports from his web site a book by Mike Lafferty “Too Many People, Not Enough Planet”:  Lafferty said, “In the days of sailing ships, sailors used to leave goats on islands as they passed to ensure fresh meat on return trips. It worked too well. The animals bred faster than the sailors could eat them, and from the Channel Islands off to the

in the , goats ate all the vegetation and starved. The goats also screwed up the environment so that native species couldn’t survive, either," said John Wenzel, director the Ohio State University Museum of Biological Diversity.  “For example, the goats stripped away the plants’ low-growing leaves so that tortoises couldn’t find enough to eat.”

Biologists explain the “lesson of the goats” as it applies to humans and point out how our "island earth" suffers.

“Two weeks ago, the Inter-governmental Panel on Climate Change released

its report blaming humans for increased temperatures, melting glaciers and rising seas,” Lafferty reported. “Too many people burn too many fossil fuels at 82 million barrels daily.”

That doesn’t account for millions of tons of coal, natural gas and wood being burned every day by 6.6 billion humans.

"With global warming, we’ve been able to create this problem in the first place because we’ve had virtually free energy in the form of fossil fuels," said ecologist Tom Waite.

Lafferty reported, “Climate change, Waite and others say, is a sign that we are exceeding the number of people Earth can sustain.  Every year, at least 77 million humans are born in excess of those who die. That’s 1 billion people every 11 years.  Some, however, argue that we are adept at adapting, and point to

increased agricultural production and medical advances that fend off disease.”

Right now, Earth’s carrying capacity is thought to be somewhere in the range of four billion to five billion people.  We sport 6.6 billion today and grow by 240,000 every 24 hours.  See www.populationmedia.org to see the population ticker.

“In biology, the carrying capacity usually refers to the number of animals a given area can support with adequate food, shelter and territory or the space to reproduce,” Lafferty reported. “ ecologist Stuart Pimm said half of the world’s population has little access to medicine, electricity, safe water and reliable food supplies.”

“The United States possesses resources to sustain less than half of its current population of 300 million, according to ecologist Paul Ehrlich, who first called attention to potential population problems in 1968 with his book, “The Population Bomb,” Lafferty reported. “Waite and other ecologists increasingly think of the idea of carrying capacity in terms of an ecological "footprint," the amount of land on Earth that it takes to support a group of people.”

Americans, who make up five percent of the world’s population, use 25 percent of its resources and cast a large footprint.

" ’s footprint is like 11 times the state of ," Waite said. “The average American’s footprint is about 22 acres.  By far, the largest component is energy.  In contrast, the average citizen of has a footprint one-sixteenth that size.”

Lafferty reported, “If all 6 billion people were to share the world’s resources equally, Americans would have to reduce consumption by 80 percent for each of

“Waite rides a bicycle most days.  However, Waite’s footprint grows when he arrives on campus or has to rent a car to attend a meeting out of town,” Lafferty reported.

"The moment I show up at work, I suddenly violate the fair Earth share and I become unsustainable. Carrying capacity and footprint are tied to the global economy, which has quadrupled since the world’s population doubled,” said Waite.

“That leads to a fear that slowing population growth might not ultimately curb greenhouse gas production if more people achieve Western lifestyles,” said Barry Rabe, a political scientist who studies environmental issues. “ and are developing rapidly and have already affected

climate change.  is opening an average of one coal-fired power plant a week to meet electricity demand. The power plants emit carbon dioxide, a

"Everyone in wants two things: their own apartment and their own car," Pimm said. "That change is going to have a massive effect on the planet."

Lester Brown, president of the Earth Policy Institute, said the sustainability question is a loaded one, “"People ask me how many people the Earth can sustain. I usually respond that it depends on whether you want to live like an Indian or an American."

“For example, farmers worldwide grow about two billion tons of grain every year. Each American consumes an average of 1,760 pounds annually, mainly because of the grains used to feed farm animals. If everyone on the planet consumed that much grain,” Brown said.  “Earth would support about 2.5 billion people.

But in , people consume about 440 pounds each. If everyone else in the world did likewise, the world’s grain would support about 10 billion people.”

Population, water and food lock horns. Growing one ton of grain requires 1,000 tons of water.  Water shortages already occur in Africa, Asia and the . As water flows from agriculture to support growing urban populations, more grain must be imported.

“Alternative energy, touted as a possible solution to burning fossil fuels that generate greenhouse gases, also adds a factor to the food equation,”Lafferty reported. “Soybeans are increasingly in demand for biodiesel. And ethanol production now vies with food for corn.  Brown estimates that by 2008, half of the corn crop will go to ethanol.”

"Seventy percent of all corn imports in the world come from the , so what happens to corn crops affects a lot of countries," Brown said.

Waite said this competition for energy and food will change the landscape, “If we were to replace our reliance on fossil fuels and instead grow fuel plants that would require setting aside lots of land to produce ethanol.  We don’t have enough land worldwide to meet those demands.  Demand for food, fuel and materials already consumes more trees and crops than are being grown worldwide.”

Waite compares the issue to a bank account.  “Humans are already drawing on capital rather than interest, and once that is exhausted, they will find Mother Nature reluctant to make a loan.”

For more information concerning our future, contact Dr. Alan Kuper at alankuper@earthlink.net.  As you surmise through this series on the next added 100 million Americans, we’re crafting a mighty deep chasm for our children.  Check out www.uscongress-enviroscore.org for a greater understanding of what we face.

As you can see from the first part of this series, I showed you what I’ve seen in the via my travels as well as my observations throughout my journeys around the world. In latter portions of this series, you’re hearing from the experts to verify what I have seen.  We must connect the dots, take action and prevent a horrible overpopulation future for our children by taking action today.  “We can bring about population stabilization gracefully or nature will do it brutally.”  Henry Kendell

CLIMATE LOCKDOWNS ARE NEXT! - MARTIAL LAW & THE END OF HUMAN SOVEREIGNTY