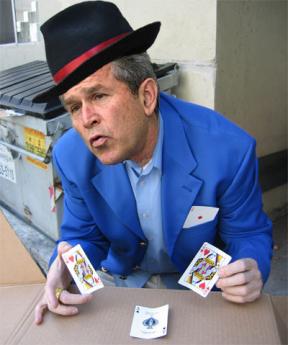 Georgie
By Craig J. Cantoni
April 11, 2007
The vowel on the end of my name has attracted racist idiots and ignorant dealers in stereotypes all of my life.
So what?
One time, I was the keynote speaker at a conference of public school teachers.  When the master of ceremonies introduced me, some blacks in the front row cracked jokes about the Mafia.  Ironically, the theme of the meeting was diversity.
So what?
A former boss of German ancestry regularly called me an “Eyetalian,” but didn’t refer to himself as a Kraut.
So what?
Much of the impetus behind the public school movement in the mid-nineteenth century came from the WASP establishment wanting to put “Papist” schools out of business and teach the King James Bible to Italian immigrants in public schools.
So what?
In the late 1930s, the mainstream media, including Look magazine, printed ethnic slurs about Italians.  For example, it was written that baseball great Joe DiMaggio was not a typical Italian, because “he didn’t reek of garlic and put bear grease in his hair.”
So what?
When former New York Governor Mario Cuomo ran for the presidency, concerns were raised about his ethnicity.
So what?
I say “So what” because discrimination by nincompoops doesn’t matter and has absolutely no effect on how I think of myself.  Why should I care what a nincompoop says, especially one as pasty-faced, bigmouthed and ignorant as Don Imus?
The only discrimination that matters is discrimination by the government, because the government has the power to enforce discrimination at the point of a gun.
If the southern states had protected the rights of blacks at the point of a gun instead of enforcing slavery and Jim Crow at the point of a gun, the racism of southern white crackers wouldn’t have mattered in matters of importance.  Blacks would have started their own businesses, banks, schools, and communities.  And whites would have quickly broke ranks and hired blacks and sold goods and services to them.
Jews have proved this point throughout history.  As long as governments didn’t take their lives and property, they thrived without being part of the establishment.  The same with Italian Americans, who, in spite of the discrimination they faced, have thrived so much that they now rank as high as Jewish Americans in income.
Whatever he was called by nincompoops, DiMaggio could still whack a baseball.  Whatever Italians were called in the local press, my grandfather could still buy a two-flat on Dago Hill in St. Louis and live in a community that continues to thrive today, unlike other parts of town that turned into slums long ago.  And whatever I was called by my former boss, I had the satisfaction of quitting and then watching the business go bankrupt.
Race mongers like Jesse Jackson and Al Sharpton have it backwards.  They fake hysteria over insensitive racial remarks by the likes of Don Imus while endorsing government discrimination in the form of affirmative action, set-asides, quotas, and college admission shenanigans.  In that sense, they are no different from the southern white crackers of yesteryear who used government power to favor their race.
It’s enough to turn my head of Brillo-like hair gray.
____________
An author and columnist, Mr. Cantoni can be reached at ccan2@aol.com.

California Governor Newsom Faces a Recall and a Libertarian Might Win

This Weekend on LewRockwell.com