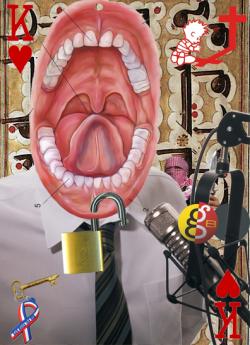 The controversy surrounding remarks by talk show host Don Imus shows that the nation remains incredibly sensitive about matters of race, despite the outward progress of the last 40 years. A nation that once prided itself on a sense of rugged individualism has become uncomfortably obsessed with racial group identities.
The young women on the basketball team Mr. Imus insulted are over 18 and can speak for themselves.  It’s disconcerting to see third parties become involved and presume to speak collectively for minority groups.  It is precisely this collectivist mindset that is at the heart of racism.
It’s also disconcerting to hear the subtle or not-so-subtle threats against free speech.  Since the FCC regulates airwaves and grants broadcast licenses, we’re told it’s proper for government to forbid certain kinds of insulting or offensive speech in the name of racial and social tolerance.  Never mind the 1st Amendment, which states unequivocally that, “Congress shall make NO law.”

Let’s be perfectly clear: the federal government has no business regulating speech in any way.  Furthermore, government as an institution is particularly ill suited to combating bigotry in our society.  Bigotry at its essence is a sin of the heart, and we can’t change people’s hearts by passing more laws and regulations.
In fact it is the federal government more than anything else that divides us along race, class, religion, and gender lines.  Government, through its taxes, restrictive regulations, corporate subsidies, racial set-asides, and welfare programs, plays far too large a role in determining who succeeds and who fails in our society. This government "benevolence" crowds out genuine goodwill between men by institutionalizing group thinking, thus making each group suspicious that others are receiving more of the government loot.  This leads to resentment and hostility between us.

The political left argues that stringent federal laws are needed to combat racism, even as they advocate incredibly divisive collectivist policies.
Racism is simply an ugly form of collectivism, the mindset that views humans strictly as members of groups rather than individuals. Racists believe that all individuals who share superficial physical characteristics are alike: as collectivists, racists think only in terms of groups. By encouraging Americans to adopt a group mentality, the advocates of so-called "diversity" actually perpetuate racism. Their obsession with racial group identity is inherently racist.
The true antidote to racism is liberty. Liberty means having a limited, constitutional government devoted to the protection of individual rights rather than group claims. Liberty means free-market capitalism, which rewards individual achievement and competence, not skin color, gender, or ethnicity.
More importantly, in a free society every citizen gains a sense of himself as an individual, rather than developing a group or victim mentality. This leads to a sense of individual responsibility and personal pride, making skin color irrelevant. Rather than looking to government to correct our sins, we should understand that racism will endure until we stop thinking in terms of groups and begin thinking in terms of individual liberty.

Would You Be Considered A Domestic Terrorist Under This New Bill?