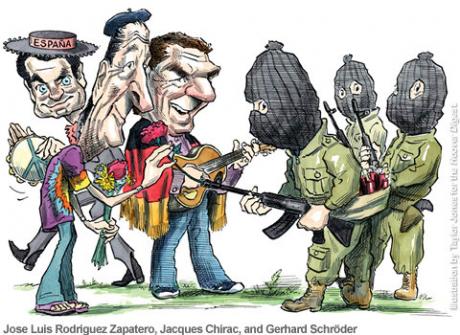 The greaterst appeaser was . . .
By Craig J. Cantoni
April 19, 2007
Who was the greatest appeaser of Muslim extremists in history?  Was it the French, the Germans, Barbara Streisand, Nancy Pelosi, or Jimmy Carter?
The answer is Thomas Jefferson.
Which Americans were the greatest proponents of imposing Christian and Western values on Arabs and Muslims?  Was it southern Bible-thumpers, born-again evangelicals, the Religious Right, or Texas neo-cons?
The answer is East Coast Protestants in the early nineteenth century.
Except for the Bush administration and the hundreds of members of Congress who voted for the invasion of Iraq, most Americans have some familiarity with the history of the Middle East in the twentieth century and thus know how the West had failed time and time again to bring peace, prosperity and Western values to a region steeped in the opposite values.  But few probably know the history of American involvement in the Middle East right after the birth of the United States and throughout the nineteenth century.
Oh, sure, they may know that the Marine hymn glorifies the landing of Marines at Tripoli in 1804 to stop the Barbary States from taking American ships and imprisoning and torturing American sailors.  But they probably don’t know about the years of tributes (extortion and ransom money) paid to Muslim regimes before and even after the landing.  (At one point in the Jefferson administration, the tributes totaled ten percent of the federal government’s budget.)
Although I’m a history buff, I didn’t know much about any of this until I recently read the excellent book, Power, Faith, and Fantasy:  America in the Middle East 1776 to the Present, by Michael B. Oren.
Other tidbits from the book:
- East Coast Christians were so enamored with the Old Testament and Jewish traditions that they gave biblical names to American towns and began a movement to restore a Jewish homeland in Palestine.  Known as “restorationists,” one of them was a professor of Hebrew at New York University, George Bush, a forebear of the two presidents of the same name.
- Simultaneously, a large movement sprang up to send missionaries to the Middle East to convert Muslims and Eastern Orthodox Arabs to Christianity.  The movement had widespread support and funding from the public, the tacit approval of the U.S. government, and encouragement from newspapers of the day.
- The missionaries were shocked by what they saw in the Middle East.  They characterized Muslims and Bedouins as ruthless, barbaric, and untrustworthy.  And they characterized Islam as a phony religion.  They also were quite hypocritical, in that they criticized slavery and oppression in the Middle East while slavery was thriving in the antebellum United States and while Native Americans were being oppressed.
- Famous author and Puritan Herman Melville was one of the few who saw the folly in the missionary movement.  Journeying to the Middle East, he concluded that the missionaries couldn’t convert Eastern Orthodox Arabs and Muslims into American-style Protestants.  “Might as well attempt to convert bricks into bride-cake as the Orientals into Christians,” he wrote.
- Back then, the situation in Beirut was no different from the situation there today.  Muslims, Druze and Christians were at each other’s throats.
- There also is nothing new about the U.S. government supporting regime changes in the Middle East and giving financial and military aid to despots.  It did plenty of that in the nineteenth century.  For example the U.S. participated in an Egyptian expeditionary force into Sudan, massacring native tribes along the way.
- Nor is there anything new about the U.S. and France being at loggerheads over their respective interests in the Middle East.  One of the biggest bones of contention was France’s use of Egyptian troops in its conquest of Mexico.
George Santayana wrote the famous dictum about being doomed to repeat history.  As Power, Faith, and Fantasy shows, we’ve certainly done that in the rat-hole of the Middle East.
________________
An author and columnist, Mr. Cantoni can be reached at ccan2@aol.com.

A Defense of 1950s Housewives

Did the Franks speak French or German?

The American Third World: We'll Soon Be Living in It