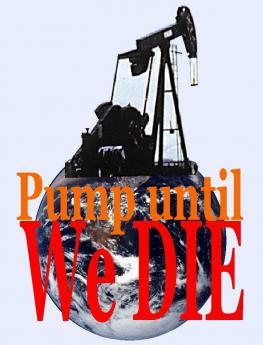 The National Geographic, Vol. 138 No. 6 December 1970 - “We are astronauts, all of us. We ride a spaceship called Earth in its endless journey around the Sun. This ship of ours is blessed with life-support systems so ingenious that they are self-renewing, so massive that they can supply the needs of billions.”

But for centuries we have taken them for granted, considered their capacities limitless. At last we have begun to monitor the systems and the findings are deeply disturbing.”

Scientists and government officials of the United States and other countries agree that we are in trouble. Unless we stop abusing our vital life-support systems they will fail. We must maintain them or pay the penalty. The penalty is death.”

A successful take over of the then nascent environmental movement by big oil began during the months from late 1966 until the end of 1967. At that point in time the issues of clean water and accountability for those who pollute were non-partisan, the present partisan divisions did not exist. Clean air and water were things that everyone agreed were necessary; liability for polluting must be exacted. “If you pollute, you pay,” was the first point on the agenda intended for consideration at the 1972 Stockholm Conference for the Environment according to Helen Garland, an early activist. That agenda changed in the back halls of the United Nations before the conference was gaveled into order.

It was a change that alarmed and bewildered people like Garland, representative to the Environmental Movement at the UN in 1971. John McConnell, originator of the real Earth Day said, “the agenda of Peace, Justice and the care of Earth, were sidelined for something very different.” Howard Baker, Jr., a Republican Senator from Tennessee, headed the first Environmental Protection Agency. Clean air and water seemed as imminent as social justice.

The forces that changed our direction are one in the same, Big Oil.

The bottom line for oil companies was to ensure that their profits from the only thing they had to sell continued. In the last 30 years, that has come to trillions from those continued sales by Big Oil, today amounting to one quarter of the entire GNP for the entire globe. Additionally, oil companies have received from “US federal government energy subsidies and incentives over the past 50 years – $644 billion. It shows that the federal government has subsidized the energy industries – nuclear, coal, oil, natural gas, renewables – using different budget and off-budget funding techniques.” This is according to The International Journal of Global Energy Issues.

Money talks and motivates. The losses to Big Oil if the original agenda for the environment had been enacted would be literally incalculable. Ensuring that did not happen was not a conspiracy, it was simple corporate policy.

According to Helen Garland, one of the original surviving founders of both the Earth Society and its present CEO, the wording for the first reference to the conference on the subject in the records from the United National Library on the environment changes over the three year period from 1967 – 1969. In 1967 the subject is clearly, “Pollution.” The point is obviously the impact of human action on the earth in specific locations. The next year the wording has changed to, “Environment.” This term redirects the focus from both the liability and accountability for specific human action to a broad category with no specific focus. A year later it has changed again, the text becoming "Human Environment." This term bifurcates what is actually a closed system, dividing humanity from the Earth. To win you must divide your enemy. “The enemy” the oil companies confronted was very direction of humanity for a clean environment and social justice.

By 1972 the Environmental Movement, now firmly under the control of Big Oil, first by the careful reworking of the agenda and resulting laws and the hijacking of what had been intended to be the yearly focus of that movement, Earth Day, was complete.

The hijacking of Earth Day had been accomplished through an overt show of public relations muscle, powered with 4 million dollars fed into the hands of Dennis Hayes, a sallow undergraduate who got the name, “Earth Day” from John McConnell and the older generation of environmentalists that included Helen Garland and Margaret Mead.

The conception of one day to highlight the agenda of, “Peace, Justice, and care of the Earth,” had been carefully thought out to encapsulate the whole agenda for that movement. The moment chosen, the second of the Spring Equinox, marked the moment of time when the Earth shifted between summer and winter in its Southern and Northern Hemispheres. The term was first used when the idea was presented by McConnell to a few members of the San Francisco Board of Supervisors and other community leaders early October 1969 at a UN meeting.

Today, if you visit the site for the April 22nd Earth Day you will find much rhetoric but nothing that enables you to easily or inexpensively accomplish what those aware of the issues in the early 70s expected; the ability to get off the grid of energy dependence. The original idea of accountability is nowhere in sight.

Big Oil had found a useful tool with Richard Nixon. Nixon's tenure in office, January 1969 to August 9, 1974 overlays many of the events that so impacted the cited changes in the Environmental Movement. According to Garland Nixon assured environmentalists that clean air and water were priorities. Jimmy Carter, with a strong background in engineering and economics, was elected in 1976, and represented a problem for Big Oil. Big Oil removed him from office through the simple expedient of sharply increasing oil prices during the critical period of the election.

The original wording for the Clean Water Act, passed in 1967, is today unavailable as is the poll of Americans done by Senator Baker that was published but never distributed around 1968. According again to Helen Garland these laid down standards and expectations that were then rewritten by Maurice Strong, an ambitious oilman from Canada who moved into the United Nations through a series of introductions, first serving, from November 1970 until December 1972 as Secretary-General of the United Nations Conference on the Human Environment. After a long and lucrative career at the United Nations Strong went on to involvement in the Food for Oil debacle and from there to Peace University in Puerto Rico, where he used that institution to train paramilitary. He is now reported to be working in China.

After the initial take over the work of vilifying the United Nations and environmentalism guaranteed that the chasms of distrust would reinforce the divides first forged among Americans in the early 70s. Those who did the work profited mightily, many finding careers in politics and nonprofits funded by Big Oil.

Today a new generation of environmentalists and innovators are taking stock and coming together to provide the means for Americans to get off the grids of dependence. John Sturbine, a businessman and investor, and others from that earlier movement, including Helen Garland, are founding what they call The Earth Project, intended to make off grid alternatives cheaply available. Included among those involved are a non-oil engine for automobiles, a technology for reducing the cost of energy in homes by one half and a boat design that also eliminates the use of petroleum.

Sturbine said for this article, “there is no limitation to human innovation; Americans could be off the grids entirely in three years.”