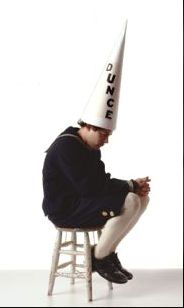 Who**Q**s a dunce?
by Craig J. Cantoni
April 27, 2007
Arizonans are barraged with news stories about the state ranking near the bottom in graduation rates, test scores, the number of people without medical insurance, and other social ills.  Sounding like a platform of the Democratic Party, the stories typically say that the social ills can only be solved with higher taxes and more redistribution.
Strangely, Arizonans hear very little about a leading cause of the low rankings--namely, that the state ranks near the top in out-of-wedlock births.  It also ranks near the top in the racial/ethnic groups that have a high illegitimacy rate:  Hispanics and Native Americans.
A cynic might say that political correctness and a fear of hurting people’s feelings explain the dearth of information about the connection between out-of-wedlock births and social ills.  He might even imagine that if there were an outbreak of malaria, the media would say nothing about the root cause of the disease, for fear of hurting the feelings of mosquitoes.
Well, a new study by the Center for Immigration Studies will hurt a lot of feelings.  Its findings match the findings of earlier studies and analyses, including those authored by me.  The study can be found at:
http://www.cis.org/articles/2007/back507.html
Highlights:
- Maricopa County (metro Phoenix) ranks third out of 50 counties across the nation in the percent of out-of-wedlock births in the immigrant population.  Nearly one out of every two births to immigrants is out of wedlock in Maricopa County.  State-wide statistics are just as sobering, with Arizona ranking near the top in the illegitimacy rate of immigrants.
-  Nationally, Hispanic immigrants lead all other races in illegitimacy, with 42% of children of Hispanic immigrants being born out of wedlock, versus, 32% for the children of black immigrants and 11% for the children of Asian immigrants.
- Surprisingly, illegitimacy increases over the generations.  The rate for native Hispanics is 50%, or eight percentage points higher than the rate for Hispanic immigrants.
- Arizona is hit particularly hard by the foregoing statistics, because Hispanics make up about 29% of the state’s population, or twice the percent for the nation as a whole.  (Native Americans, who also have an above-average illegitimacy rate, make up about 5% of the state’s population, or five times the percent for the nation as a whole.)
- Between 1980 and 2003, the national illegitimacy rate of all races, immigrant or native, has more than doubled.
Similar trends have been seen in the number of single-parent families, which, like the related problem of out-of-wedlock births, are a leading cause of school dropouts, poverty, and other social ills.
Reducing out-of-wedlock births is a daunting task, of course, because unmarried women have children for a variety of complex reasons, including cultural forces, psychological needs, parental example, and enablers in the media, academia, business, and government.  But the first step in solving any problem is to admit that it exists and not be afraid to talk about it.
The cruel fact is that the problem of out-of-wedlock-births (and the related problem of single-parent families) is not talked about in polite company and the local and national media as much as other problems.  For example, there has been much more coverage about the dangers of smoking, of not wearing a seatbelt, and of eating fatty food than there has been about the “dangers” of out-of-wedlock births and single-parent families.
At the risk of sounding simplistic, all of these dangers have one thing in common:  They are all the result of behaviors that the individual can change.  If that were not true, then the government, media, academia, businesses, nonprofit groups, and other members of the establishment wouldn’t be funding public service messages to encourage people to change their behavior and make the right choices about tobacco, seatbelts, and food.
Maybe if similar coverage were given to out-of-wedlock births, Arizona would stop ranking near the bottom in social ills, because it would no longer rank near the top in births to unmarried women.
______________
An author and columnist, Mr. Cantoni can be reached at ccan2@aol.com.