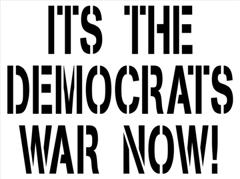 This week, Congress finalized the controversial $124 billion Iraq emergency supplemental spending bill, with the House and Senate both voting in favor of final passage. The majority of my Republican colleagues and I voted against this measure, and the president has vowed to veto the legislation.

In this final version, the House leadership retained billions of dollars in pork meant to attract skeptical votes, retained a watered-down version of the problematic “benchmarks” that seek to micromanage the war effort, and continued to play politics with the funding of critical veterans medical and other assistance. In other words, this final version was even worse than the original in almost all respects.

As I wrote when this measure first came before the House, we have to make a clear distinction between the Constitutional authority of Congress to make foreign policy, and the Constitutional authority of the president, as commander in chief, to direct the management of any military operation. We do no favor to the troops by micromanaging the war from Capitol Hill while continuing to fund it beyond the president’s request.

If one is unhappy with our progress in Iraq after four years of war, voting to de-fund the war makes sense. If one is unhappy with the manner in which we went to war, without a constitutional declaration, voting against funding for that war makes equally good sense. What occurred, however, was the worst of both. Democrats, dissatisfied with the way the war is being fought, gave the president all the money he asked for and more to keep fighting it, while demanding that he fight it in the manner they see fit. That is definitely not a recipe for success in Iraq and foreign policy in general.

What is the best way forward in Iraq? Where do we go from here? First, Congress should admit its mistake in unconstitutionally transferring war power to the president and in citing United Nations resolutions as justification for war against Iraq. We should never go to war because another nation has violated a United Nations resolution. Then we should repeal the authority given to the president in 2002 and disavow presidential discretion in starting wars. Then we should start bringing our troops home in the safest manner possible.

Though many will criticize the president for mis-steps in Iraq and at home, it is with the willing participation of Congress, through measures like this war funding bill, that our policy continues to veer off course.
Additionally, it is with the complicity of Congress that we have become a nation of pre-emptive war, secret military tribunals, torture, rejection of habeas corpus, warrantless searches, undue government secrecy, extraordinary renditions, and uncontrolled spying on the American people. Fighting over there has nothing to do with preserving freedoms here at home. More likely the opposite is true.