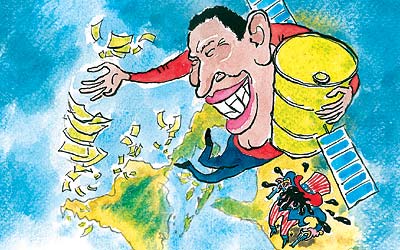 The Wall Street Journal's main Hugo Chavez antagonist is its self-styled Latin American "expert" Mary Anastasia O'Grady who makes up for in imagination and vitriol what she lacks in knowledge and journalistic integrity. She, however, wasn't assigned to write the May 1 Journal attack piece reporters David Luhnow in Mexico City and Peter Millard in Caracas got to do titled "How Chavez Aims to Weaken US." Of course, when it comes to Venezuela, the issue is oil and Chavez's having the "audacity" to want his people to benefit most from their own resources, not predatory foreign oil companies the way it used to be when the country's leadership only served the interests of capital ignoring essential social needs. No longer.

Chavez, of course, announced months ago his government would complete renationalizating his country's oil reserves when state oil company PDVSA became the majority shareholder May 1 in four Orinoco River basin oil projects with a minimum 60% ownership in joint ventures with foreign partners. The plan was broadly denounced in the US major media with Journal columnist O'Grady writing April 16 "Chavez (was) brimming with bravado as he shredded (the) oil contracts (telling) foreigners to step aside because he's in charge now (but the move will likely) end up hitting the 'commandante of the revolution' in the pocketbook (because of) corruption, incompetence and mismanagement" meaning Venezuela will now run all its own oil operations and forge its own future, not Big Oil O'Grady wants sole right to do it. No longer indeed, and O'Grady's not pleased. She's also dead wrong in her outlook for Venezuela's oil future run by PDVSA with foreign partners, but don't ever expect her to admit it.

So is the New York Times agreeing April 10 with O'Grady and other corporate media Big Oil cheerleaders. The Times used charged language condemning Chavez's "revolutionary flourish (and his) ambitious (plan to) wrest control of several major oil projects from American and European companies (with a) showdown (ahead for these) coveted energy resources...." The Times went on to claim this action would undermine Venezuela's growth hinting Big Oil's threat to leave might get Chavez to back down enough to get them to stay. It never happened as this writer suggested April 12 in an article titled "Wall Street Journal and New York Times Attack journalism." The article made it clear oil exploration and production in Venezuela is so profitable that even with a smaller share of the profits US, European and other Big Oil investors wouldn't dream of leaving. Whine plenty, leave, not likely, and now we know they won't.

AP's Natalie Obiko Pearson reported April 26 that "Four major oil companies (stopped whining April 25 and) agreed to cede control of Venezuela's last remaining (majority-owned) privately run oil projects to President Hugo Chavez's government" with ConocoPhillips coming around May 1 showing it, too, was all bark and no bite. Those agreeing through signed memorandums of understanding were Chevron, BP(Amoco) PLC, France's Total SA, Norway's Statoil ASA, ConocoPhillips, and with most antagonistic of all to the idea ExxonMobil finally doing it privately as was almost certain to happen and then did.

AP reported ConocoPhillips has the most Orinoco basin exposure in two of four projects, Ameriven and Petrozuata with a (former) 50.1% stake in the latter. It was inconceivable the company would abandon them, and on May 1 it announced it would stay on. The one remaining issue to be resolved is compensation with foreign investors having until June 26 to negotiate terms for their reduced stakes. Expect more Big Oil whining followed by capitulation again to Venezuelan Energy Ministry's expected offer of fair and equitable takeover terms.

On April 26, PDVSA's web site reported a total of 10 foreign oil companies agreed to transfer majority control of their "Oil Belt" operations to the state-run oil company. Further, the company expects to achieve a daily capacity of 5.85 million barrels in 2012 and said its January 1 taking control of 32 oil fields will advance the country "toward full national sovereignty over (its) natural energy reserves."

In response to these actions, and on the day it took effect, the Journal went on the attack again with more ahead certain to be as false and misleading. Its writers called Chavez a "self-proclaimed Maoist (wanting to) reshape the global oil business by sidelining the US and making China his country's chief strategic energy partner" for investment and export. The Journal also accused Chavez of using "oil as a political weapon" since taking office in 1999 offering discounted oil "to dozens of Latin American countries" as his weapon of choice plus forging alliances with US "economic rivals like China and political rivals like Iran."

Hugo Chavez, in fact, is a self-proclaimed social democrat charting his own independent course toward progressive "21st century socialism" along the lines Latin American expert James Petras calls the "pragmatic left" in contrast to the more "radical left" of Colombia's FARC guerrillas; elements of "teachers and peasant-indigenous movements in Oaxaca, Guerrero and Chiapas in Mexico;" many "small Marxist groups in Argentina, Bolivia, Chile and elsewhere;" and Venezuela's "peasant and barrio movements," among others. Other Latin American leaders Petras calls "pragmatic" leftists include Bolivia's Evo Morales, Cuba's Castro and many "large electoral parties and major peasant and trade unions in Central and South America" including Mexico's PRD party, El Salvador's FMLN, Chile's Communist Party, "the majority in Peruvian (Ollanta) Humala's parliamentary party;" and others including "the great majority of left Latin American intellectuals."

Unlike what the Wall Street Journal and rest of the US corporate media report or imply, Chavez and others on the "pragmatic left" aren't aiming to destroy capitalism, just tame it. They also plan no wholesale renunciation of accumulated IMF, World Bank and other international lending agency debt, only calling for it to be on more equitable terms; restructuring it to make their nations' debt burden fair; and aiming to become free from its repressive yoke as Venezuela did paying it off completely with Chavez announcing May 1 his country is pulling out of the IMF and World Bank, formally breaking free from the kind of debt slavery these institutions impose on countries they lend to guaranteeing their people continued impoverishment.

It's an important move that may encourage other countries to follow as Ecuador's President Raphael Correa already did ousting the country's World Bank representative saying "we will not stand for extortion by this international bureaucracy." Look for more IMF-World Bank resentment to surface ahead as Chavez's and Correa's courage may embolden other leaders to move in the same direction or at least begin by openly voicing public discontent as a first step to possible policy change to follow.

Hugo Chavez offers them a new choice having announced in March he intends creating a Bank of the South social democratic alternative to the repressive neoliberal Washington Consensus IMF-World Bank model. So far Bolivia and Argentina have agreed to be part of it with Chavez hoping other Latin countries will join as well by contributing 10% of their capital reserves for this enterprise he hopes will be operating by summer.

Additional parts of Chavez's plan involve forging stronger ties to other oil importing nations like China to reduce Venezuela's dependency on a hostile US. He also announced April 29 the nation hopes to gradually sell its seven US-based Citgo refineries replacing them with a new Latin American-based network in Bolivia, Ecuador, Nicaragua, Haiti and Dominica. It's part of his plan to provide the region a stable oil supply and 100% of the energy needs for Alternative for the Americas (ALBA) members and Haiti.

He further offers discounted oil to Latin American and other nations, not to buy support as the Journal claims, but to build progressive ALBA trade and other good neighbor alliances with regional nations the opposite of WTO-style Global North exploitive one-way deals. The Fifth ALBA Summit held in Barquisimeto, Venezuela just ended April 29 at which heads of state from Venezuela, Bolivia, Cuba, Nicaragua and Haiti signed strategic ALBA agreements with delegations from Ecuador, Uruguay, Dominique and St. Vincent and the Grenadines also attending along with social movements from other states.

Chavez aims for more than just fair and equitable trade and other commercial, industrial and energy deals, and Summit leaders made progress toward them. They agreed to alliances in ALBA Education, Health, Culture, Food, and Telecommunications that may ahead extend Venezuela's and Cuba's social agenda to other ALBA countries and Haiti.

The May 1 Wall Street Journal article says "Chavez wants to replace the US as Venezuela's main partner and client in the oil business (and) The big winner could be (big, bad US rival) China" that spells bad news for Washington and Big Oil. It continued saying the country has the largest proved reserves outside the Middle East, and if Chavez succeeds he'll force the US to be even more dependent on that volatile region than it already is. Further, Journal writers take aim at PDVSA demeaning it as a state-run company claiming it has "little focus" because Chavez turned it into a "poverty-alleviation ministry." As a result, the Journal says it became inefficient and its production fell from 3.1 million barrels a day when Chavez first took office in 1999 to 2.4 million barrels a day now according to US government Energy Information Administration (EIA) figures that look to have been cooked to bring them down.

They're disputable with differing ones coming from alternate sources including the 2006 CIA World Factbook listing Venezuela's daily production at slightly under 3.1 million daily barrels, around the same figure PDVSA reported then including extra-heavy crude from Orinoco belt production. In May, 2006, Venezuelan Minister of Petroleum and Energy, Raphael Ramirez indicated the International Energy Agency (IEA) recognized the nation's daily oil production at over 3 million daily barrels while the government reports it now at 3.3 million compared to 2.6 million or less claimed by international oil analysts and EIA deliberately understating oil output the way Washington and the West distort everything positive about Venezuela under Hugo Chavez.

The Bush administration and US corporate media, flacking for Big Oil, is all over Hugo Chavez with the Journal's May Day article staying true to form. It ends saying Venezuela "was historically one of the US's most reliable energy allies" pumping all out to guarantee America a steady supply when it was most needed as it did in WW II, the 1973 Arab oil embargo and the 1991 Gulf war. It then blamed Chavez for changing that instead of reporting Washington was at fault for soured relations that hit rock bottom during the aborted two-day April, 2002 coup against him the Journal can't admit the US instigated and supported.

All it can say, with a heavy-handed dose of sour grapes, is that "Mixing oil and politics may not help Mr. Chavez in the long run" as he'll need "private companies' expertise to develop the heavy crude in the Orinoco region" without ever conceding he already has it and a long line of takers ready to step in if any now there foolishly leave. They won't, but don't expect to see that opinion reported anywhere in the Wall Street Journal as they'd then have to admit everything they wrote earlier was false and misleading. They don't have to. You just read it here.

Also visit his blog site at sjlendman.blogspot.com and listen each Saturday to the Steve Lendman News and Information Hour on The Micro Effect.com at noon US central time.