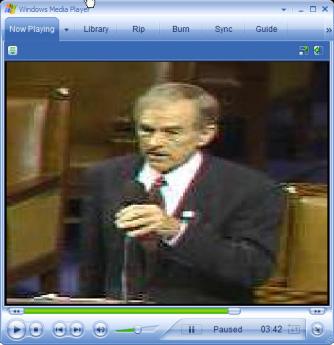 (The) conspiracy to ignore and marginalize presidential candidate Ron Paul is not a theory.  In this case, a jury would have to conclude a conspiracy against Dr. Paul by the corporation-controlled media exists.

First, MSNBC reported that Ron Paul scored the highest positive votes in both Republican debates he attended.  That means he beat out Romney, McCain and Giuliani.  There was no mention of these poll results in the major media.
Dick Morris, political pundit and former Clinton buddy, wrote an
opinion piece that appeared in many media publications 5/7/07, in which he claimed John McCain had won the debate, and I could find nowhere in his piece that Ron Paul had even attended.

CNN's Glenn Beck, an alleged conservative (my fanny) ran a tiny clip on his show that tried to make Ron Paul look like a blithering idiot.  He then went on to ask, "How did this guy get in the debate at all"?

Even WorldNetDaily, a prominent, conservative Internet news provider, has largely ignored Ron Paul's candidacy. When a candidate wins two debate polls in a row that are reported by
the likes of MSNBC on its own web page, that is news, especially since the winner of both polls allegedly had no chance to win the nomination. The media normally jumps on that kind of news, because people in America love underdogs, but not this time.

No, this is a concerted effort.

Please review below what Representative Ron Paul stands for, and far more importantly, what he has done.  Among other things, Ron Paul is the only congressmen who got up and demanded Congress declare war before attacking Iraq.
Carl F. Worden
About Ron Paul

He does not participate in the lucrative congressional pension program.

He returns a portion of his annual congressional office budget to the U.S. treasury every year.

Congressman Ron Paul (R-Texas) is the leading advocate for freedom in our nation's capital.   As a member of the U.S. House of Representatives, Dr. Paul tirelessly works for limited constitutional government, low taxes, free markets, and a return to sound monetary policies.  He is known among his congressional colleagues and his constituents for his consistent voting
record.  Dr. Paul never votes for legislation unless the proposed
measure is expressly authorized by the Constitution.  In the words of former Treasury Secretary William Simon, Dr. Paul is the "one exception to the Gang of 535" on Capitol Hill.

Ron Paul was born and raised in Pittsburgh, Pennsylvania.  He graduated from Gettysburg College and the Duke University School of Medicine, before proudly serving as a flight surgeon in the U.S. Air Force during the 1960s. He and his wife Carol moved to Texas in 1968, where he began his medical practice in Brazoria County.  As a specialist in obstetrics/gynecology, Dr. Paul has delivered more than 4,000 babies.  He and Carol, who reside in Lake Jackson, are the proud parents of five children and have 17
grandchildren.

While serving in Congress during the late 1970s and early 1980s, Dr. Paul's limited-government ideals were not popular in Washington.  In 1976, he was one of only four Republican congressmen to endorse Ronald Reagan for president.

During that time, Congressman Paul served House Banking Committee on the where he was a strong advocate for sound monetary policy and an outspoken critic of the Federal Reserve's inflationary measures.  He was an unwavering advocate of pro-life and pro-family values.  Dr. Paul consistently voted to lower or abolish federal taxes, spending and regulation, and used his
House seat to actively promote the return of government to its proper constitutional levels.  In 1984, he voluntarily relinquished his House seat and returned to his medical practice.

Dr. Paul returned to Congress in 1997 to represent the 14th
congressional district of Texas.  He presently serves on the House Committee on Financial Services and the House Committee on Foreign Affairs.  He continues to advocate a dramatic reduction in the size of the federal government and a return to constitutional principles.

Congressman Paul's consistent voting record prompted one of his
congressional colleagues to say, "Ron Paul personifies the Founding Fathers' ideal of the citizen-statesman.  He makes it clear that his principles will never be compromised, and they never are."  Another colleague observed, "There are few people in public life who, through thick and thin, rain or shine, stick to their principles.  Ron Paul is one of those few."

...but he also had the lowest negative rating:

"Ron Paul is the only true conservative in the GOP race.  Americans saw that last night," continued Snyder.  "The campaign looks forward to further debates and opportunities so even more Americans will discover Dr. Paul's message of freedom, peace and prosperity."