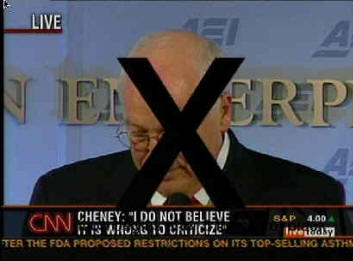 May 8, 2007 -- Cheney on DC Madam's list. Yesterday, WMR reported on the DC Madam Deborah Jeane Palfrey's list: "WMR has been informed that the CEO of a major corporation is a former CEO but, nonetheless, the aforementioned extremely high-level official of the Bush administration. The individual, who is definitely "newsworthy," reportedly engaged the services of Palfrey's escort firm while he was the CEO and maintained a residence off Chain Bridge Road in the Ballantrae neighborhood in McLean, Virginia, a few blocks from the headquarters of the CIA."

Cheney "X'd" off the DC Madam's list by ABC/Disney.
WMR has confirmed with extremely knowledgeable CIA and Pentagon sources that the former CEO who is on Deborah Jeane Palfrey's list is Vice President Dick Cheney. Cheney was CEO of Halliburton during the time of his liaisons with the Pamela Martin & Associates escort firm. Palfrey's phone invoices extend back to 1996 and include calls to and from Cheney. Ironically, in 2000 Cheney was appointed by Bush to head his Vice President selection committee, a task that enabled Cheney to gather detailed personal files on a number of potential candidates, including Bill Frist, George Pataki, John Danforth, Fred Thompson, Chuck Hagel, John Kasich, Chris Cox, Frank Keating, Tom Ridge, Colin Powell, and Jim Gilmore, before he selected himself as the vice presidential candidate.
The White House saw to it that ABC/Disney killed the DC Madam's story before yet another scandal swamped the Bush administration. Cheney is departing Washington today for a trip to the Middle East, where he will visit the United Arab Emirates, Saudi Arabia, Egypt, Jordan, and the USS John C. Stennis in the Gulf.

Finnally... cause for articles of impeachment ;)