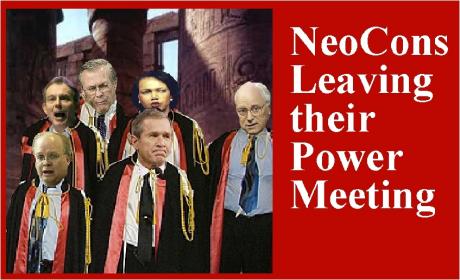 We all know that the NeoCons are strange and there have been many reports that they fancy themselves the inheritors of the powers of the Illuminati. One wonders if they perform rituals in the Oval Office – or if those little interludes take place in the basement of the White House. If that is the case does Karl Rove look as dumpy in his ritual garb with whatever symbology stretches across his belly as he does the rest of the time? It it fact that many of the shocking events of the last years, for instance September 11th, have taken place on the 11th Day of the month. When that happens it usually coincides with U. S. exercises of some kind. Right now a massive Homeland Security Exercise is taking place. Tomorrow is May 11th.

While none of us believe in the esoteric significance of numerology if that is a factor in the bizarre world inhabited by the NeoCons then noting the dates becomes a way of understanding them, tracking their MO. The odd coincidences in dates have been noted and followed for sometime by a small group of savvy journalists, for instance Leon Smith of the Iconoclast. Smith queried Captain Eric May on what he thought of a story on the possibility that May 11th might be the stage for a much needed 9/11 type event yesterday. The e-mail and response from May is below.

Captain May will be the guest on my show, the Spiritual Politician tomorrow, May 11th, to talk about the inner workings of minds that use numerology in their continuing attempts to make themselves into kings and queens. Also on the plate will be their TheoCon friends and playmates, who use their own rewritten version of the Bible to do the same. They use different scripts but both spell disaster for all of us.

Don't miss the show; it should be fascinating. You can listen in from anyplace on Earth. The Spiritual Politician, airing on BBSRadio.com at 4pm Pacific Time. Hosted by Melinda Pillsbury-Foster

In light of this week's events, do you have any comments regarding this story?

I believe that the Sunday (5/6) U.S. media release of a new "Al Qaeda / Al Zawahari" message is meant to revive the American people's fear of "Islamic terrorism."  You noted, no doubt, that Al Zawahari's remarks labeled the Democrats as defeatists emphasized the importance of Iraq and generally insulted the USA.  These are all points that might have come from the mouth of Karl Rove, since they mirror Bush Administration rhetoric.  In fact, I think the statements -- and the entire message -- did originate with Karl Rove and the White House, which has constructed and controlled the Al Qaeda myth since 9/11.

On Tuesday, (5/8) the U.S. medial promulgated an FBI story about a "home grown" terror cell's intention to attack soldiers at Fort Dix, New Jersey.  This story was an echo of summer, 2006, "Global War" propaganda asserting that "Canadian Al Qaeda" intended to capture Parliament and behead the prime minister, and that Florida-based Al Qaeda "wannabes" intended to blow up the Sears Tower.

Today U.S. media is spinning the Fort Dix plan as reminiscent of 9/11 and Al Qaeda, thereby causing the most anxiety to the American people.  The Bush Administration/U.S. media propaganda cycle, in short, supports our concern that the Homeland Security/Defense Department mass terror exercises now under way across much of the nation may be a pretext for a pre-planned false flag terror attack against the American people.

Please accept this as an official Ghost Troop alert to the prospect of more government treason like 9/11.  Please do not read my remarks as a prediction. The nature of the information contained in your article and my observations is not specific enough for this command to issue a prediction.

As you know, I have published with your newspaper on the date-coding of false flag terror attacks.  Informed people know that "Al Qaeda" has been credited with attacks that, amazingly, frequently carry the odd-numbered month with the 11th day of that month.  For instance, New York (2001) was on 9/11, Madrid (2004) was on 3/11, and Mumbai/Bombay (2006) was on 7/11.  There are date-code variations such as Amman, Jordan (2005) which carried the 11/9 date code (9/11 reversed), and London (2005), which carried the date-code 7/7 (or 7 x 11).  However you look at it, whether as a true believer of the official Al Qaeda story or (like you and me) as a skeptic who believes that Al Qaeda is in reality " Al CIA duh," these terror events show that terror attack  planners are obsessed with the number "11."

PS:  For those who want to know more about Ghost Troop, our work, or me.  I refer them to my "May Day interview" with the Iconoclast, published last week:  http://www.lonestaricon.com/absolutenm/anmviewer.asp?a=1386&z=132.  At the end of the interview you kindly posted key references to our prior work in analyzing and anticipating false flag terror.