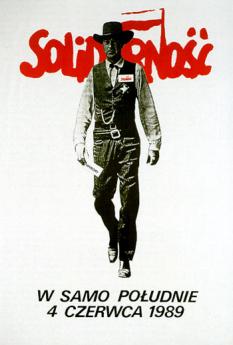 Yesterday, Ed Gantro, from Poland of all places, posted a comment on the radio interview I did earlier this week. That comment was the begining of the blog entry below.

Today Ed has written a comment here that is quite remarkable and inspiring on many levels.

Best wishes to Ed and his people.

Nice work! Is there anything people abroad who aren't American citizens (like myself) can do to help the cause?

I put the Ron Paul Revolution thing on my Polish libertarian blog - you can go there and see if you like it. But I'm aware that is not going to win Ron Paul a lot of votes ;D

Anyway, I wish him all the best.

I hope he wins and saves the planet!

He IS the man.


I'd like to give you some advice because in my country there is one political party that has been treated by the mainstream media in the same way as they treat Ron Paul in the US.

It's called: "Unia Polityki Realnej" (The Real Politics Union) and the media simply hate them! They've been ignoring their leader, Janusz Korwin-Mikke since we regained so-called independence (what a lie! Polish Round Table didn't bring Liberty to the people - the communists and a few Solidarity leaders just shared the country between themselves - Poland STILL is a socialist country! Over 80% of the money earned is taken by the state - if you take the hidden taxes into account!).

We (I'm not IN the party but I'm one of many independent supporters) decided to use the internet and it works! UPR has now OFFICIALLY 3-4% (if they have 5% in 2009 - they'll get into parliament which would be a DISASTER for the liars who've been ruling our country!) - we work pretty hard (you may think 5% is nothing - don't forget that Poland used to be occupied by Soviets so it's still not easy to explain the people that the government shouldn't control their lives...): we spread the word as much as we can, we have our blogs (by the way - Janusz Korwin-Mikke's blog in now THE MOST popular blog in Poland!), we write about the Liberty and why it is important - we attack (if they deserve it) the "right-wing" (very funny! The Kaczyński Twins are socialists - the only difference between them and the postcommunists is that they believe in God - but STILL they are socialists! and the left-wing (the most important thing is: we do our best not to lie to the public - even if the truth wouldn't win us many votes!).

We send lots of e-mails, we're beginning to plan some actions (we've got our own UPR flag and we're thinking of having them hung from our windows before the elections come), we put on our websites interesting banners or logos that would make the viewer stop and think about them.

The "big media" ruled by corrupt "journalists" are trying to ignore Ron Paul at the moment. Then (after they realize it's not possible anymore) they will try to ridicule him.

And that's going to be the most difficult task for all of you - you must be prepared BEFORE this will be happening. You should talk to your friends, your family, your neighbours and try to explain what is really going on in your country. And don't get me wrong - I'm not trying to tell you what to do - I only want you to know that lots of people count on you!

We know it's not going to be easy for us to win in 2009, but some positive changes in the world would certainly help us.

That's why some of us really support Ron Paul - he's with no doubt the best candidate for the President of the most important country in the world.

If he gets elected - it can be the real sign of changes that could "invade" the entire world!

I'll try to spread the word in my country about the great man, Mr. Ron Paul!

Leftists Have It Wrong on Rights