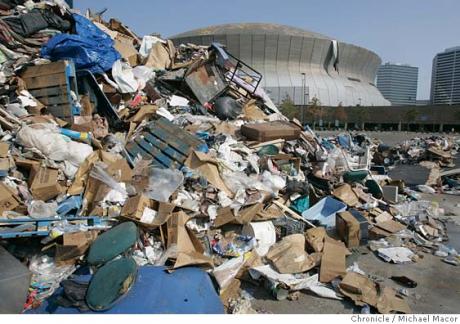 THE NEXT ADDED 100 MILLION AMERICANS

Each Sunday, in order to publish the New York Times, 62,860 trees must die—sacrificed to make pulp into newsprint-paper.

In 52 weeks, that equals 3,268,720 trees— killed just so New Yorkers can read their news— and discard it after less than 15 minutes reading, on average per reader.

Not only do the trees die— the chemicals, transport and processing of paper creates horrific pollution.   As reported in the May issue of Vanity Fair,

"The paper industry is the world's third-greatest industrial polluter, behind manufacturers of chemicals and steel."

Paper mills exhaust uncountable tons of lethal chemicals including mercury, lead and dioxins.  Dioxins are carcinogens that can combine with other toxins to make them mutagenic— meaning they alter your DNA.

"Not only dioxins but 100,000 other synthetic compounds have made their way into eco-systems far and near, infecting food chains and accumulating in their top carnivores— eagles, polar bears and humans."

From 2005 to 2006, global consumption of paper increased from 300 million tons to 366 million tons— a 22 percent increase.  However, out of 62 million newspapers printed daily, 44 million are thrown away within one day— and precious few reach recycling bins.

This week, as you read this report, 500,000 trees will be dumped into landfills, or burned.

Recycling in proves a joke at all levels— including plastic, glass and aluminum containers and paper.  Americans recycle only four percent of plastics.  Apathetically pathetic!

As you tear off three feet of toilet paper once or twice a day, please appreciate the 500,000 acres of boreal forest in and clear cut to support your habit.   Those forests support native caribou, bears, moose, wolves and billions of songbirds.

As Allen Hershkowitz, an expert on paper consumption said, "We're wiping our asses with endangered habitat."

Do you eat food?  Of course you do!  Do you know what it costs to grow human-food crops, and the impact upon our environment?

Today, because of depleted agricultural land— corn, cotton and other plants demand 110 pounds of nitrogen fertilizer per acre.  Farmers apply pesticides, herbicides— all based on oil.

Those chemicals impregnate the soil— causing death for nitrogen-fixing bacteria.  Those chemicals drain into ground water, rivers and finally the oceans.  Dead zones create horrific consequences for all living creatures.

No wonder honey bees die by the billions.

What about your personal transport motor-vehicle

How about commercial aircraft; passenger & freight

Airplanes inject 600 million tons of carbon dioxide a year into the atmosphere. The list of wasteful processes and products grows long.

Americans use and waste 380 billion plastic bags annually.  Yes, that number stands out in the Vanity Fair article!  Used an average of 25 minutes, they're not biodegradable.   They sink into lakes, streams and oceans to strangle marine life that eat them— or "wear" them, snagged on their bodies.  The remainder hit landfills where they never break down.

If these figures don't sicken you, they sicken me because I’ve seen unbelievable waste around the world in my bicycle travels.

A whopping 70 percent of our consumer recyclables never see a recycle bin.

Vanity Fair tells us, "In 2003, Americans went through 73 billion plastic or polystyrene cups and plates and 64 billion paper ones, generating 1.7 billion tons of waste.  Styrene molecules migrate into your food from containers, and, once in your system, become estrogen mimics- enabling molecular bonds in your body.  These have bizarre effects on reproductive anatomy, fertility and increase your chances of breast or testicular cancer."

You don't suppose the young couples who want to raise their own baby connect the chemical process to their infertility, do you?

Americans consume 6.7 billion hamburgers a year.  A whopping 80 percent of U.S raised grains feed livestock.  One beef cow eats 2,700 pounds of grain for a result of 1,000 pounds of beef.  That doesn't include the thousands of gallons of water consumed per pound of beef.

Marine-life consumed or destroyed by humans

On our ocean fishing beds, factory trawlers 'vacuum' up marine life with 20 mile long drift nets.  This process is anything but cautious and discerning.   Millions of "inadvertent" innocents die. If you recall, 100 million sharks suffer death at the hands of humans annually.

Once snagged, captains cut the nets away— which commence killing dolphins, turtles, sharks and other sea life— with impacts lasting for decades.  Scientists predict a complete failure of marine fisheries by mid century.

One person out of every three on the planet today lacks reliable access to freshwater.  Please, take a deep breath and think about that statement!  That's two billion people who can't find a clean drink of water today as you read this report.

Can you imagine adding 100 million people to the in 33 years?

Every negative aspect of this environmental and social nightmare increases by the needs of 100 million more people.

What are we thinking?

What are we doing?

Where are we headed?

Do we behave as lemmings?

Our civilization heads like a brakeless train— over a cliff.