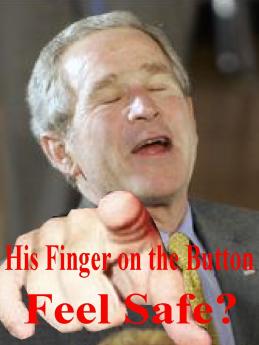 We used to dismiss them as 'those nutty evangelicals.' We learned to avoid them when they came to the door. My middle daughter, Dawn, once invited them in to participate in her Wiccan Rites. They scampered off like cockroaches when the light comes on. Dawn has always been different. But that was a number of years ago; before one of their number was sort of elected President. With Bush in the White House the whole thing has gotten more serious. Someone who thinks Armageddon is a GOOD IDEA has his finger pressed on the button.

Wait, there is more.

They took over America's Military. New cadets to the academies, their minds open for new ideas and ready to be reprogrammed, are met with a phalanx of evangelical chaplains standing shoulder to shoulder in numbers that would make you think Jesus was sighted on the horizon.

Cadets are subjected to the same kind of group-think techniques that parents paid to have undone in the 60s and 70s. But those kids were not being trained to control the mightiest military force in the history of the world. These are.

And there is more coming.

In Junior ROTC, in many text books, material is now popping up justifying every stupid, ignorant thing these people ever said about American History. That is what many of our children are learning as fact, the arguments, mostly constructed that allows the change over from America as we know it to an America that uses the Bible instead of the rule of law is underway.

Hear Chris Dodda on The Spiritual Politician Friday, May 18th at 4pm Pacific time. The audacity of the TheoCons will shock you; Chris will delight you.

You need to know. More of the officers and men who think Armageddon would be a delight are coming on line every day; one day soon they could decide they have waited long enough.