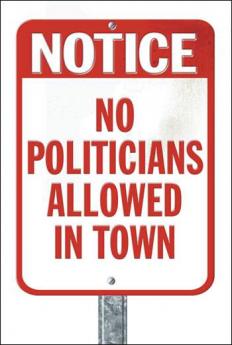 Politicians are Not Welcome in Iowa
Above is the link to the Front Page Story in the Des Moines Register Newspaper
(Actual Graphic on the front page of the Newspaper here today)
I share the following as just one example of what many have become use to as "normal".
Just a few notes about my trip to Iowa.
- 7am arrived at Sky Harbor International Airport for an 8:53am flight on US Airways. - 20 minutes in line for curb check-in. $80 for 1 extra bag  $6 charge for checking 3 bags. - 20 minutes in "corral" weaving back and forth, picking up and setting down two carry-on bags every 30 seconds on the way to the front line while having TSA women announcing loudly every 2-3 minutes that all liquids 3.5 oz. and over must be discarded and all liquids 3.4 oz. and under are to be placed into small see through plastic bags they will provide.
- Unsolicited comment to my frown by TSA man checking IDs and Tickets before security screening, "The price we pay for freedom".
- Young family, parents in their late 20's, teaching their small son about 4 and a small girl about 3 to remove shoes for inspection, have their bags scanned and their sippy cups poured out into trash as part of the process of traveling in America.
- Bottle of water and a salad to eat on plane $13.
- I discover that the plane is a smaller "express" plane that has smaller overhead storage where my carry-on won't fit and I have to "Gate Check" my bag.
- After boarding we discover that the on ground generator has malfunctioned and the Life-Support System isn't working (what air-conditioning is called during summer months in Phoenix). After 10 to 15 minutes of sweating and increased passenger grumbling an exterior power supply is hooked up to plane and life-support is restored.
- We are then informed that the aircraft doesn't have a co-pilot and they are waiting to find him. They know that the scheduled pilot arrived on another flight but is nowhere to be found.
- After 30 more minutes we are told to exit the plane.
- I stay on the plane to eat my salad and talk to the pilot. He said that the entire airline industry is tittering on the edge of bankruptcy and that we can expect more delays such as this as airlines trim. He says that there is a shortage of available pilots since compensations have dropped. He also stated that the maximum of 100 hours of available from each flight crew member per month cause such shortages often near the end of the month. He suggests that booking flight in the first week of the month instead of the last week of a month increases your chance of not having such crew shortage delays.
- After another 15 minutes we are told that another pilot is being sent from home and that we should be leaving within an hour.
- I hate flying!!!!!
- I just heard the announcement that the co-pilot has arrived at the airport. 11:33am
- I had a direct flight to Iowa,... but with a 3 hour lay over where I started.
- Well I arrived in Des Moine but several of us didn't have our bags available so we had to travel 100 yards away to the US Airways desk to wait for them to locate our bags but only a sign was there telling us that they would be back 5 minutes ago. After finding our bags and getting to my hotel I noticed a TSA inspection slip in each of my three bags (well, I hope they took some Ron Paul Revolution stickers :)

I share these highlights so you can understand my frame of mind upon arriving. Another dose of just how much government interference in our lives causes more problems than not. Now that I am 46 years of age I realize just how many people younger than I have no idea what air travel use to be. I remember in the early '80s a good friend of mine was an airline stewardess with Eastern Airlines (back when it was OK to call them a stewardess) and would take credit cards from passengers that just walked onto the shuttles from Boston to Washington D.C. and take payment for their flight while in the air. But now we are training small children to stand still while a uniformed government agent wands them.
Flying into Des Moines you notice just how many farms there are. Everywhere outside each small town and city are nothing but farms. My mother was born near here and I hope to take a couple of hours to visit some relatives near by on a dairy farm that I remember visiting as a teenager. The people here know what is happening to America more than most. And they know how they are being used by the political machine.
I waited to get my haircut until I arrived just so I could get the news from those that know,... the barbers (I'll get to the bartenders later :)
Just as I suspected the opinion of the several people I talked to today was that the political machine here is used to launch selected candidates that are predetermined by representatives of a political machine that never touched a pair of denim coveralls.
I don't know why I didn't realize it before, but it seems clear that Iowa has been used to launch presidential political careers because it is much cheaper to control a small state's caucus than a large state's open primary. And the media is all too willing to make a show of it.
But in this year of rebellion by the vast majority of Americans, especially rural Americans that are far less dependent on the government for their sustenance, there is clearly fertile ground for the liberty message of Ron Paul.
The front page headline of the main newspaper here made it clear that the people are sick of all of the Pandering and Bullshit they have to endure every 4 years. One small town is celebrating 150 years as a community and they don't want presidential politics anywhere near it this Fourth of July and are not shy about voicing their opinion.
We should have taken far greater notice of what was happening when Giuliani and McCain decided to skip the unskipable state of Iowa with their campaigns. But the crystal clear use of states like Iowa to cement a candidate in the mind of the people with the masonry work of the media became obvious after the demonstration put on by the Iowans for Tax Relief and the Iowan Christian Alliance. Their fear of the message of 10 term congressman Ron Paul is to obvious to be ignored by any American with even the slightest interest.
The Revolution has come to Iowa and the bad guys have no idea how to address this clear threat from the people. No longer are the people insulated from the truth. The media, formerly known as mainstream, has been replaced with mind to mind communication on the Internet that is now moving into the streets. Those that relied on old methods of control through propaganda can no longer see into the future because they don't understand the power of access to the truth. The Status Quo is very afraid,... and that makes them very dangerous.
Well, at 3am Iowan time we stare down the beast some more :) So stay tuned in. FreedomsPhoenix will keep you informed. Look for some fun photos tomorrow afternoon and for the Iowa videos by Sunday morning, here on FreedomsPhoenix.
Ernest Hancock
Publisher - FreedomsPhoenix

1 Comments in Response to Politicians are Not Welcome in Iowa

Get down with your bad self, Ernie! You are clearly in our thoughts and prayers and I hope you give 'em hell!