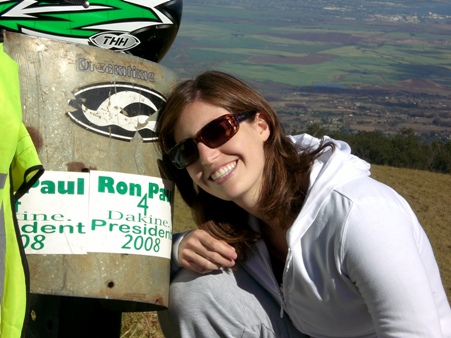 DD**Q**s Daughter
Ron Paul goes Hawaiian
Maui Wowie!  Who would have thought that going on vacation to Hawaii would turn out to be a political adventure?  Of course there was golf, beach time, a helicopter ride over a lava spewing volcano, a luau with Mai Tai’s and other adventures.    I read FreedomsPhoenix.com every day and get my fix of Ron Paul regularly.  I should state that I don’t vote, but I do support Ron Paul both financially and via information giving to others.  I really wasn’t expecting to find any reference to Ron Paul in this detached State thousands of miles from home, nor was I looking for it.
It started with a 38 mile bike ride down the Haleakala Volcano (fortunately this one was not spewing lava).  I first did the ride two years ago, and I would highly recommend this for anybody visiting Maui.  They pick you up at your hotel or condo before dawn, cart you up the road to the top in time to see the sunrise, and then you go down at pretty incredible speeds for 38 miles.  You stop at various places along the way, to not only take pictures but also to shed the layers of clothing that you need at the top, since it’s cold up there.  About halfway down there were Ron Paul signs on the road!  Quite a pleasant surprise and pictures were taken. 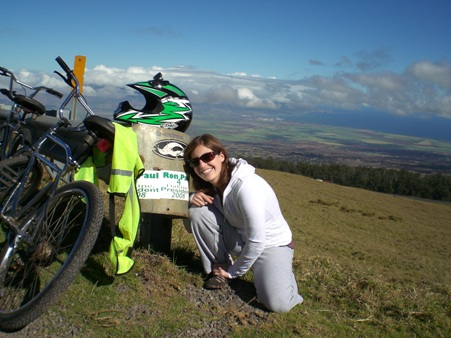 That evening we were out to dinner and right next door to the restaurant was a little gift shop called Cool Maui Stuff.  In the window was prominently displayed a poster with Ron Paul’s picture on it.  We had to go in!  In the back of the store they had a TV going with a constant loop of Ron Paul videos.  We ended up chatting with the owner, who recently started a meetup group in Maui, bought some cool Maui stuff, and suggested he check out FreedomsPhoenix.com   While we were shopping, we heard people asking, who is Ron Paul, and saw a couple of kids watching the videos.  The owner told us there is a lot of interest in Ron Paul by Hawaiians.
A few days later we went to the Big Island of Hawaii and were sitting on the beach when we were approached by a young man selling drinks to the resort guests.  Fortunately it was Pina Colada time.  I was reading a novel at the time and the drinks guy asked me what I was reading, I guess just making conversation.  I told him I was reading a political thriller and unlike reality, it had a fictional vice-president and a senator that were crooked and evil.  I know, it’s hard to believe, but sometimes politicians are bad.  He said to me, “Speaking of politics, what do you think about this candidate for President….I can’t think of his name…?”
I had my Ron Paul Revolution t-shirt crumpled up on my chair, which I then displayed, and sure enough he said to me, “That’s who I was going to ask you about, Ron Paul.”  In the next ten minutes I educated him about Ron and his ideas and gave him a few libertarian websites to check out.  The next day my kids heard him chatting up other guests about Ron Paul.  I saw him later and he wants to put up Ron Paul Revolution signs all over the Big Island.
As they say in Hawaii, “Aloha”, “Mahalo”, and now, let’s add “Let the Ron Paul Revolution begin”.

4 Comments in Response to Ron Paul goes Hawaiian - By DD

I am a Ron Paul Meetup organizer.
By not voting,dd could be the one that Paul needed,but did not get.
I have talked to,given cards to,sold Tee shirts,yard signs,bumper stickers,to,made revolution signs,spread the word all over my part of this nation.
I drove 120 miles just to deliver a Tee shirt and a yard sign.
Paul will need every vote he can get,so,every Ron Paul supporter that does not vote,is useless.
Every vote counts...every vote.

DD and DD's Daughter have done far more for the cause of freedom than the vast majority of voters. Many of us that are very passionately in support of Ron Paul's message and effort are not voters because we know better. If you think voting is the solution to our problems, then you have not been paying attention.

As we get further into the actual political process it'll become a lot clearer to the general public just how much the process is removed from the people. Systems are in place to make certain that the acceptable candidates to those in power that are finally voted for will not challenge that power. I am the most encouraged by the exposing of these systems.

The willingness to "plug in" to the Matrix and do your part in support of the very system used to control the population and justify the existence of the beast that "rules" over us is seen by many, that have been paying close attention to the process, as naive at best.

Voting can be seen as entertainment (like buying a lottery ticket). In the case of showing up for a hand count that is immediately counted in front of witnesses (like New Hampshire's Presidential Primaries) or at individual state's straw polls that don't use computers, you can expect to have a real impact. But to believe that decades of molding a system to support the efforts of those that have benefited from the largest theft of wealth in all of human history is not mature enough to bypass any important "vote" just demonstrates a lack of knowledge. And any righteous advocacy in support of giving credibility to a regime via the process they use to justify the plundering is viewed by many that have been involved for years on the front lines as.... well, mostly we just ignore it and continue in our efforts to expose the lie.

Ron Paul represents a message of liberty that doesn't require vote totals to be legitimized. And you don't have to be a voter to help spread the message. I know many don't understand why it is that so much activity in support of Ron Paul's efforts are done by those that choose not to support the very system he is fighting.

BUT - There is a reason to follow the process very closely and to take advantage of every opportunity to demonstrate support for Ron Paul's message,... So you can learn how the process has been hijacked by the Bad Guys.

The RonPaulRevolution's success has very little to do with vote totals. If I were to take the time making any kind of count, I would be counting how many minds were freed from the idea that their freedom is based on a vote total.

Easy there, jcalex, this young lady is doing more than two voters to spread the word and encourage others to vote and vote wisely. She may have good and valid reasons for not wanting her name on a list of registered voters. If you don't know what I'm talking about, you need to do a little research.

As one who has voted in only two presidential elections in the last 43 years - Goldwater, 1964, Ron Paul, 1988 - it is a personal choice not to hold one's nose in order to vote. Most of the time there are no real choices except the lesser of two evils, which is still evil.

I will vote in 2008 for the best man for the job, Ron Paul, a statesman and a born leader. The choice is clear; there is only one choice. I have 3 grown children, the youngest heads a very large meet-up group in our area. My vote is for their future. With Ron Paul as President for 8 years I could finally have reason to hope for a brighter future for all three of them.

Before Ron Paul entered the picture, "the light at the end of the tunnel" was most likely a NWO train.

Look DD`S daughter..if you don`t vote,your useless to Ron Paul.
You are helping the other candidates by not voting.
I`m glad you had such a wonderful vacation,.....how nice.
If you not part of the solution,your part of the problem.
VOTE!! DUMB ASS...IT`S A POLITICAL ADVENTURE