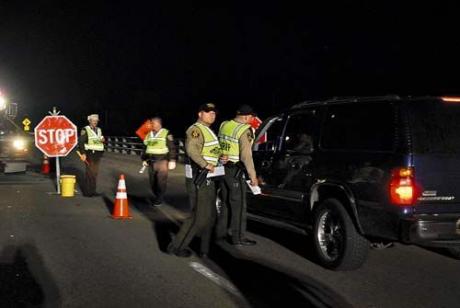 The article below was originally published by the Arizona Daily Star on August 26, 2007. Of special note are the numbers indicating sheriff deputies have been paid over $140,000 in overtime pay from federal grants to conduct these roadblocks and that less than half of those  arrested over the past two years have actually been convicted. Since the arrest rate is only 0.6%, to start with, the conviction rate is less than 0.3%.
Given the obvious ineffectiveness of these checkpoint regimes, it's important to point out that our right to travel and our freedom from unreasonable search and seizure are being violated so that cops can earn overtime pay from their federal handlers. A question to consider is how many accidents or deaths have resulted from drunk drivers who weren't identified and taken off the roads based upon probable cause because cops were too busy harassing 46,000+ sober drivers at suspicionless checkpoints over the past two years....
It's well past time to put an end to these needless incursions into individual rights in Arizona. For more information about the Pima County Sobriety Checkpoint regime, go tot:
http://checkpointusa.org/Checkpoints/Sobriety/sobrietyCheckpoints.htm
On to the article: