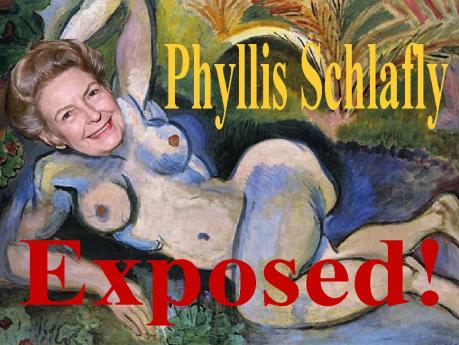 Now, our subject for today: Phyllis Schlafly and her well paid work over the last 40 years. Her career was founded on, “A Choice, Not an Echo.” The book, well written and researched, itself turned out to be the persuader that focused attention on Schlafly's potential to feed a disinformation campaign that has gone on for decades.

BigOil found Phyllis hanging around the John Birch Society in the mid 60s. Schlafly was ambitious, looking at a cultural reality that denied to women the opportunities available to men in professions. The Glass Ceiling was still intact. Someone, doubtless made her a lucrative offer, perhaps even William F. Buckley, Jr. They needed a mouth to inject disinformation, persuading women they wanted to stay second class citizens.” Phyllis grabbed the job with both hands.

Her alternatives were bleak. Ads for jobs in the paper were still listed in two categories, “MEN,” and “WOMEN.” Intelligent women who had worked to earn graduate degrees were routinely offered jobs as typists.

It was understandable; her background was not strong on any familial work in social justice; her family had never contributed to any of the movements that created the wealth of America in social consciousness.

Intelligent, driven, and entirely focused on doing the job for which she had been hired, Phyllis blossomed.

The biography written by Donald T. Critchlow, titled, “Phyllis Schlafly and Grassroots Conservatism,” was reviewed favorably by the Horowitz organ, Front Lines Magazine, October 12, 2005. That interview by Critchlow holds some interesting insights into Schlafly and events along with crediting Schlafly with phenomenal success in subverting the agenda for women's rights.

“Critchlow: It is certain that ERA would have been ratified. It defeating ERA, Schlafly tapped into a new constituency that GOP conservative strategists realized could revive the party: Christian evangelicals. This was a constituency waiting to be mobilized. Traditional minded Christians, as well as Jews, felt that they were under attack by the secular left. Since the banning of prayer in public schools in 1962, evangelical Christians had been simmering. Then in the late 1960s came further assaults on tradition and custom through the liberalization of abortion on the state level, feminism, sex education, and the spread of pornography. Schlafly mobilized evangelical Christian women into the STOP ERA campaign, and in doing so, helped revive the conservative movement and the GOP, shifting it to the Right. She showed that social issues was the key to unleash a conservative revolution that began in the midterm elections of 1978 and continued through the election of Ronald Reagan in 1980.”

BigOil had gone after the Conservative Movement using William F. Buckley, Jr., Ronald Reagan, and employing the wiles of Bush Senior and his paid political operative, Karl Rove. They had subsidized the work of Ralph Reed and Pat Robertson in remaking the demographics of the GOP. Hiring Phyllis a natural continuation of the same strategy. The first goal was extinguishing the real agenda of Conservatism as enunciated by Robert Taft and Barry Goldwater while continuing to shake the boogie man of Communism.

It worked. But looking back we can see that it was always a ruse.

The analysis of United Republicans of California, the group who had gotten Reagan the governorship of California in 1968, Ronald Reagan was never a Conservative. His administration had laid the groundwork for a shift to centralized control that was unprecedented in California history. Changes included state control of education, promotion of regional government, institution of sex eduction in schools, guidelines for redress of racial imbalance in schools, a sharp decrease in personal property rights, Income Tax Withholding, a move towards gun control, and other acts that caused the group to “oppose Ronald Reagan' as candidate for President or Vice President, and urge Americans Nationwide to carefully scrutinize his record.”

An educated woman who had known Barry Goldwater and was well informed, Phyllis Schlafly would have had to be well aware of the disconnect between two philosophies that were diametrically opposed. Schlafly consistently ignored the ideas of Conservatism, selling the repackaged ideas of the newly rising wave of Evangelicals from Southern denominations then being urged to become political and active in the Republican Party. This wave of membership was very different than the activists who had supported Goldwater.

The Republican Party shifted not to the Right, the traditional direction of individual rights, small government, and low taxes, but to burgeoning Federalism that used government as the accepted means for coercing personal behavior. Phyllis helped create that shift; she profited and gloried in her success.

When an intelligent, articulate woman undertakes a clear agenda that in no way conforms to her stated goals it is well to take the irrefutable actions as leading straight to the truth of the matter.

Schlafly herself came from a home where her mother, Odile Dodge, the daughter of the moderately successful attorney, worked as a librarian and a school teacher to support her own family and that of her parents. Schlafly herself was forced, due to the family's financial straits, to begin working early to put herself through college.

Why would Schlafly work to deny to other women the opportunities she took for herself?

The obvious is that this strategy made possible a prominence and prosperity that otherwise would have been impossible. Schlafly was motived by a fierce desire for money and social prominence that also propelled her into the Daughter's of the American Revolution.

Opposing the Equal Rights Amendment was a job, nothing more. The arguments she carefully honed each shared that they were posed in heavily charged emotional terms, threatening dire changes in the culture. In each case she made sure that the objective facts were not available to legislators actually making the decision to vote for or against the ERA. That has remained her strategy ever since.

It is true that Phyllis Schlafly was personally responsible for the derailing of the ERA; what was missed was the fact that the ERA was needed to make the torturous process of trying to simulate equality through the intrusion of government at all levels unnecessary.

In vilifying the women she dismissed as 'feminists' Schlafly ignored for her own benefit the generations of women who had endured a reality that refused them the rights that preexist all government, as promised in America's Mission Statement, the Declaration of Independence.

Schlafly understood what she was doing and for whom she worked. That work made her wealthy and fed the hunger for prestige in her. We all paid. The time has come to see her for what she is and deliver justice. Women, right and left, want to leave a better world for all of our children. Let's come together and make it happen despite the Schlaflys.