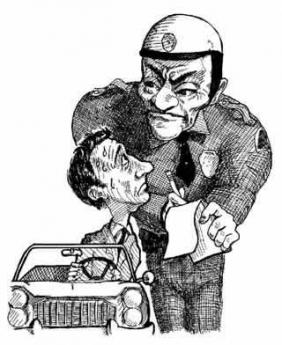 A Missouri motorist who recorded a St. George cop's threats to falsify charges against him in order to throw him in jail & teach him a lesson, is now being hounded & harassed by other area cops after his videotape resulted in the first officer's firing.

I first heard about Brett Darrow in 2006 while conducting online research regarding sobriety checkpoints. At the time, Brett was a 19 year old teenager who had already had a troubling run-in with an off duty cop. The cop, who turned out to be drunk at the time, assaulted him, lied about the incident and falsified charges. The charges were later dropped by a grand jury and when Darrow threatened to sue for violation of his rights, the City of St. Louis settled to keep the lawsuit from going forward.

This incident, along with a separate dispute over a traffic ticket, prompted Darrow to outfit his car with a video camera. Darrow realized it's always an uphill battle when it's just your word against authority, so he hoped a video camera would help even the odds just a little.

Boy was he ever right.

Brett's first trial by fire came in late November of 2006. While minding his own business and obeying all traffic laws, Darrow was stopped at a suspicionless sobriety checkpoint in St. Louis County, Missouri. After being stopped, a deputy demanded to know where he was going. Darrow responded by telling the man with a gun and a badge, he didn't want to discuss his personal business with him. The deputy became angry and demanded that he get out of the car.

Darrow's video of the incident and a transcript of the encounter is available at:

What's troubling about this encounter, above and beyond the presence of suspicionless police roadblocks on America's streets, is how willing police officers seem to be to escalate a situation beyond reasonable boundaries when an individual, who hasn't done anything illegal to begin with, doesn't immediately bow down to the misuse of official authority. Darrow had no legal obligation to talk to the officer who stopped him. Nonetheless, the deputy used Darrow's desire for personal privacy as an excuse to detain him, conduct a wants and warrants background check, and temporarily seize his vehicle - all violations of the fourth amendment.

Without the video camera, it would have been assumed by many that the police officer had reasonable suspicion to detain Darrow and conduct a background check. Indeed, when Darrow told his story to a police supervisor, the supervisor stated there must have been some other reason why the deputy took the actions he did. The video makes it clear however the deputy had no such reasonable suspicion and was merely pissed that Darrow refused to play his game. The deputy then abused his authority by detaining him in order to show Darrow who was in control.

While obeying the law and minding his own business once again, Brett Darrow was approached by St. George Police Sergeant James Kuehnlein after entering a commuter parking lot late at night to wait for a friend. Upon approaching, Sgt. Kuehnlein demanded to see Darrow's identification even though Darrow hadn't violated any law. When Darrow asked Kuehnlein why he needed to see ID, Kuehnlein became abusive and demanded that Darrow get out of the car. Darrow did so and Kuehnlein started in on a fifteen minute verbal tirade designed to threaten, intimidate, and harass Darrow for daring to ask him a question. All the time, Darrow's video camera was recording the encounter.

To get an idea of just how abusive Kuehnlein's tirade was, a short excerpt from the transcript appears below:

Eventually Darrow was allowed to leave but not before he was bodily searched and a wants and warrants background check was conducted.

When Darrow posted the video and transcript of the encounter online at:

Folks were rightfully outraged by Sgt. Kuehnlein's abusive behavior and misuse of police power. Darrow correctly pointed out that without the video, few people would have believed his version of events over the word of Officer Kuehnlein.

The video created such an uproar that the St. George Chief of Police was inundated with over 400 phone calls in protest. Sgt. Kuehnlein was suspended during an internal investigation where it was further discovered he violated department policy by either failing to videotape the encounter or destroying the videotape he did make.

What's even more disturbing however is that background checks into Kuehnlein's past discovered that a local judge had sealed several convictions for assault and robbery in the 1990s' because Kuehnlein testified he was having a hard time finding work as a police officer:

After the internal investigation was complete, St. George's Board of Alderman voted unanimously to fire Sgt. Kuehnlein:

While many people might think the story would end here, they would be wrong.


Instead of being grateful that a bad apple who used his position of authority to victimize others had been rooted out of their ranks, several local police officers have become outraged that a mere citizen would dare to hold a police officer accountable for his egregious actions. An online search through several law enforcement forums discovered comments by local police threatening to hunt Darrow down and harass him for standing up for his rights:

"Take the kid to jail... today... tomorrow... the next day... every time you see him out and he commits a traffic violation... tow his car and take him to jail... period. No arguing, no yelling.....nothing but the sound of cash leaving his wallet from impound fees and fines."

And even more disturbing, a death threat from an anonymous police poster:

"I hope this little POS punk bastard tries his little video stunt with me when I pull him over alone - and I WILL pull him over - because I will see "his gun" and place a hunk of hot lead right where it belongs."

Remember - these are the same folks that have been entrusted by the public with extraordinary authority to serve and protect - not dominate and control.

At first, I thought perhaps these were just a few misguided cops letting off a little steam online, but the latest news shows at least some of these cops are following through with their threats to intimidate and harass Mr. Darrow:

Needless to say, the actions of these police officers are unacceptable and represent a clear and present danger to the surrounding community - not to mention Mr. Darrow. Nonetheless, no real action has been taken by local government to address the rampant culture of arrogance and unaccountability that seems to have infested the ranks of local law enforcement.

Brett Darrow has shown us that without vigilance, it's not a question of whether or not power will corrupt. It's merely a question of when. Unless someone thinks this type of police state behavior from law enforcement is a fluke, then perhaps it's time we all started carrying cameras for protection from the excesses of government and to hold government perpetrators responsible for their actions.

My thanks go out to Mr. Darrow for putting himself in harms way to stand up for what he believes.

- Government is not reason, it is not eloquence, it is force; like fire, a troublesome servant and a fearful master. Never for a moment should it be left to irresponsible action - George Washington

Like all others who violate their oath of office,a day is coming for thir trial for treason. This includes the So called Supreme Court who states ,law enforcement is to enforce the law and have no obligation to protect the citizen. It took them a long time to admit what cops and others were really created to do while deceiving the public.
What was once known as peace officers, have become thugs with a gun & badge.
Remember they are human the same as we ,and they feel pain the same as we.
They have been brainwashed by government to regard the population as their personal enemy,because the government gives them grants to be equiped like storm troopers with jack boots, helments,and all,which gives them an excessive feeling of power, especially when the courts and their brainwashed judges aid them because it means a higher instant income for them all.
Hopefuly the Sheriff of each county will uphold his oath of office and arrest every appointed law enforcement individual in his county and confiscate all their ill gotten equipment, and they will cease to exist.

Capitol Police are Now Being Stationed Around the United States...

More Police Officers Have Retired Or Quit In The Past Year Than Ever Before, New Survey Shows