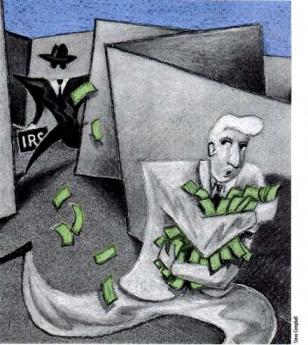 We stop at nothing, not even death.

This past week, Congress had an opportunity to permanently repeal the death tax by amending the Tax Collection Responsibility Act of 2007 to include language that ends the estate tax forever.  This would have been a good provision in an overall bad bill.  212 Democrats were enough to keep this specter looming on the horizon if the Bush tax cuts are not renewed in 2011.  The bill passed without this silver lining and now we face big in increases taxes and penalties in the next five years.

The underlying attitude behind this bill, and the estate tax, is what I find so distressing about tax policy in this country today - that being a growing disregard for property rights, which are so important to the American dream.

The basic tenets of the American dream are that through hard work and ingenuity, you can earn a better life for yourself, and you can give your children a better start than you had.  Surveying American history this vision has played out through steady economic progress and growth from one generation to the next.  Our prosperity now is our reward for hard work and achievement in the past.  Today we are the strongest economy in the world, and have much to be proud of, but Congress doesn’t seem to understand that we did not tax our way here.

Conversely, a nation certainly can tax its way out of prosperity, and that’s one danger I see with this bill, and with policies like the death tax.

The death tax punishes one of the greatest and ultimate satisfactions of achieving the American dream – the knowledge that your life’s work is an investment in your family’s future.  Instead of being able to focus on hard work, however, death tax provisions keep countless estate planners working countless hours helping Americans negotiate through complicated tax laws just to keep the fruits of their life’s work out of the squandering hands of government.

Other anti-property rights provisions in the Tax Collection Responsibility Act make desperate last attempts to extract the most amount of revenue possible from expatriots on their way out the door.  A telling signal that a country is taxing itself to death is capital flight and expatriation. When successful Americans no longer feel their property is secure from government thieves, and they have too much to lose by staying, they vote with their feet and go elsewhere.  This country is poorer for the loss of that citizen’s investment here, but it is their right to keep and enjoy what they have built up. How dare Congress or the IRS try to deny them that? And what message does that send to the next generation of young entrepreneurs?

It is troubling to me that this country is chasing away wealth, while entitlements recklessly grow. The power to tax is the power to destroy, and we are making strides towards destroying prosperity but expanding the welfare state. This is a dangerous and untenable trend.

186 Republicans and 10 Democrats voted with me last week to kill the Death Tax. It is my hope that we will get another chance in the future to end this punitive and un-American tax for good.
source: http://www.house.gov/paul/tst/tst2007/tst101407.htm