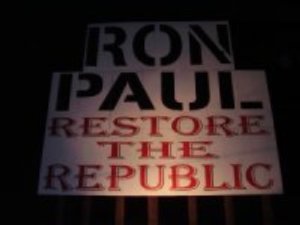 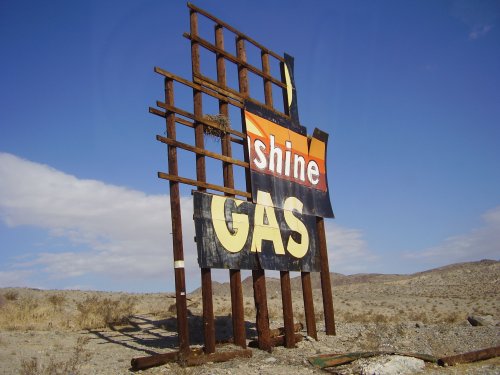 Every so often, you run across complete strangers, aligned with you in a common cause, that leave indelible memories. These are the folks that remind you why you do what you do, and outshine you with their sheer energy and passion. Right now, in the middle of the Ron Paul Revolution, I'm finding that is happening with incredible frequency, both at home and on the road.
Last month, I happened to join a gaggle of eleven such people in the middle of the desert for the Big Ron Paul Revolution Project. If you haven't heard about it, the owners of the Desert Star Ranch, half way between Las Vegas and Los Angeles, have all but given the Revolution carte blanche to adorn their property with Ron Paul signs and paraphernalia. The Desert Star Ranch is no ordinary piece of property; it is arrayed along a mile of I-15, one of the busiest highways in the nation. 7 million vehicles pass this property every month.

On one long weekend last month, those eleven people designed, created, and erected four gigantic announcements to the I-15 corridor that not only is the Ron Paul Revolution on, it's huge. This group worked from sunup to well past midnight (one "night" ended after 2:30 in the morning). If you saw someone standing around, it was because they were waiting to "steal" a paintbrush from someone who looked away from it for more than a few seconds. For all we accomplished, though, there was one disappointment; one sign that was lovingly designed and painted by some very creative members of the group remained on the ground.
While I don't want to ever place a fait accompli label on the Big Ron Paul Revolution Project (the possibilities are truly unlimited), the thought of that sign stacked on the ground has haunted me for the last few weeks as a loose end that needed tying up. Last night, whether from sheer exhaustion or a sense of tying up that loose end, I got a full night's sleep.
Since I was lucky enough to help with the first large billboard that weekend at the Desert Star Ranch, I knew how much work would be involved. While I estimated that four people could really hustle and get the job done, I hoped to get eight or more folks to the ranch, if nothing else to see that there are no boundaries to what a single person or group can do without filling out a single government form.
Deconflicting with a loaded Las Vegas work and Meetup calendar, however, proved beyond my abilities.  Getting a large group to the site was impossible and yet, I've got permanent memories of two more people that know no bounds in getting it done. 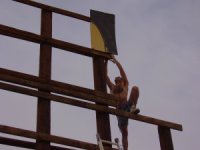 After transporting the sign, lumber, and the equipment we brought out to the billboard, we began, as on the first billboard, with shoring up the existing framing so that we could use it as hand and footholds. We worked our way up the sign to the top where we could remove the last of the old sign boards.
The lessons learned from erecting the first billboard and watching the "how to" video produced by Ernest Hancock assisted us tremendously. In fact, this one went up almost exactly like the first. I'm not sure that the straw hat is a requirement to erecting billboards, but there is no denying that these two pictures are related. 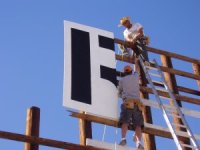 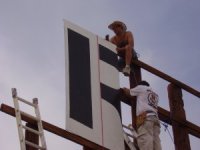 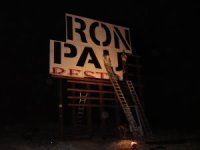 As hard as we worked, we were racing the sun. It beat us. That didn't stop Jim and Travis (who hadn't taken a break since early in the morning) so who was I to argue? We set up the light and pressed on. In the end, you have to ask yourself, what did we accomplish? It's true that nominally we erected a sign - one that will be seen by millions of people, but still, just a sign. However, Travis, Jim, and I completed the work of Sherry, Walt, Don, Russel, Tom, Earl, Thomas, Shelton, Ernie, and Emily. While the Revolution carries Ron Paul's name, those are the true candidates; real people who wholly accept that they are the sovereign, they are the ones to determine and take responsibility for their own lives. That's a list of names that should be indelibly etched in everybody's mind. 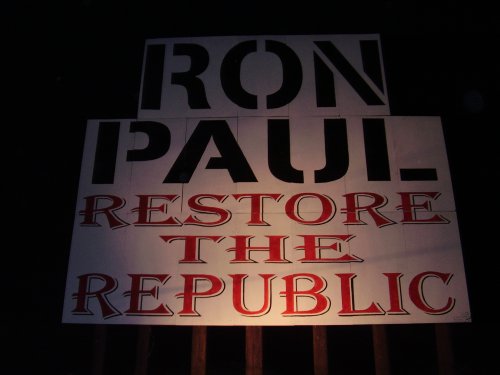 I knew you'd take care of it Brock,... and with just three men. Stallions all. I'll be coming back through Vegas from mt California trip. I hope to meet all of you and buy you dinner.

Brock man you are the MAN! what a great pleasure it was to meet with you. Keep on rocking the free world!